Who will buy my luvverly useless mobile? 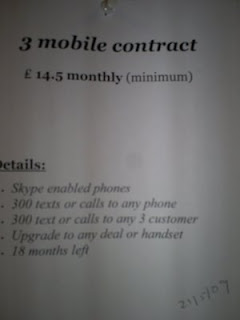 I saw this on a noticeboard the other day and was immediately suspicious when I recalled the advice given to me by 3 (ie if your phone does not work, why not sell the rest of your contract to a friend or relation?). I can imagine this desperate 3 mobile owner will be rapidly disowned by all, in addition to evidently having been dis-phoned by 3! Distressingly I realised I do not possess one single friend or relation I hate enough to sell my contract to and the only selling points I can think of to tempt anyone else to invest in a phone that cuts out at every opportunity if it rings at all is 'reduces mobile bills - and brain tumours'
Amusingly the uselessness of 3 coverage even cropped up as a comedy topic on the Alan Carr show the other day! Talking of which do please sign my online petition No coverage? No contract! against mobile phone companies committing this superhighway robbery of making customers pay for their entire contract length despite getting no signal! And outrageously this practice is currently entirely legal. I've also been lobbying BBC's Watchdog into an anti mobile-phone company abuse campaign too. What other company is allowed to charge for a service they cannot provide, after all?

Other news: My local radio station is currently running a series of 'Happy Scrappy!' ads on how if your car is over 10 years old and you have owned it for over a year, you can trade it in for scrap against a £3k discount on a new car. How green, I thought, appalled, giving my little 11 year old racing red Felicia a reassuring tap. Googling the scheme, apparently it is all about boosting the flaccid car industry rather than the Government honouring its own hollow green rhetoric, but whose car industry, since the vast majority of cars are no longer British-made?

Oh, and I have a new job, hence have been away from the blogosphere for a while, learning the ropes. Things going ok so far and my new colleagues seem nice. It is certainly a relief to have got something to pay the bills in the middle of a recession anyway (albeit after a great deal of trying). It's still in the educational sector, but since this blog is not meant to be about work...

Creative things have kind of been on the back burner a bit lately anyway, not to mention blogging, although I did enjoy a most congenial evening with my fellow Oxford writers at Mostly Books where we led a round table discussion on how we achieved our short story book success and options for new authors generally, to a packed house. Furthermore we seemed to have inspired the birth of a new writer's group in Abingdon, which is nice! Mark was the sort of friendly, enthusiastic, switched-on independent bookshop owner who gladdens the heart and really ought to be cloned. He had thought of everything, not least choosing suitably shaped premises in which to host events in the first place. Anyone who despairs of the future of independent bookselling ought to go and see what he is trying to achieve at his fine establishment, not to mention all his 'outreach work' organising author and reader events at festivals and schools as well as in his shop.

On a visit to Peterborough at the weekend, I was surprised at how seriously they seem to be taking the swine flu outbreak 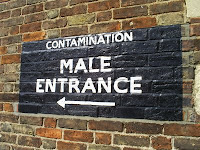 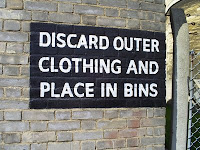 And how blatantly they celebrate their medieaval scandals... 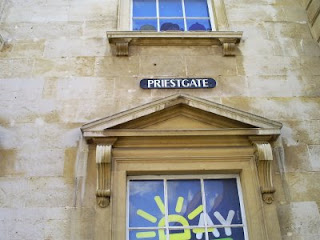 En route to Peterborough we witnessed a smouldering burned out lorry and several burned out mangled lumps of metal which only hours before had presumably been cars on the closed opposite lane of the A14 attended by a plethora of emergency vehicles. Not a sausage on the news that night though, or to be found on the internet. Has anyone else noticed this disturbing trend of unreported major happenings? A couple of years ago my former line manager witnessed a young boy run out to be killed by a car on the ringroad from the bus he was travelling in, but it too never reached the news that night or the newspapers next day.

And on that cheerful note, I look forward to catching up with you all in the next few days. It seems a long time.
Posted by The Poet Laura-eate at 5:56 pm 10 comments: