Why I'm Giving Up Alcoholics 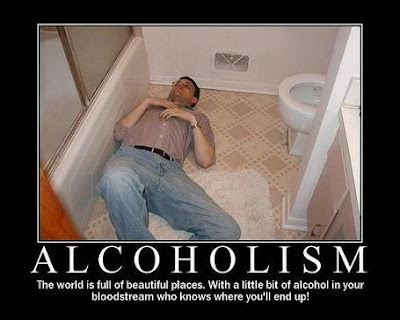 For someone who drinks some six units of alcohol per month if that, and comes from a family tradition of a sherry or two at Christmas (to the extent my grandparents probably spent more on replacing the stagnant bottle each year than they did on content consumption), I seem to have known a disproportionate number of alcoholics in my life.

Housemates, colleagues, boyfriends, best friends, others. All undetectable as having a problem to begin with, have entered stage left to recite their part in that ongoing production that is my life, some to eventually disgrace themselves and exit stage right, others to eventually recover to feature in Act 2 and beyond.


Until recently I have always endeavoured to be understanding and sympathetic about alcoholic dependency, taking the view; 'There but for the grace of God go I.' And having survived a pretty challenging upbringing myself, not to mention a difficult young adulthood, I could so easily have turned to drink (or worse). It was all around me after all, along with the entreaties to get it down me from my peers. I have also known my share of despair and loneliness, have suffered yawning chasms in confidence, have endured ill health, have been bullied at school and occasionally work when younger and generally felt the desperate need of some kind of anaesthesia to get me through. To inure me against the harsh realities of life, if not absolve me of responsibility for myself and actions entirely during the times I have felt like giving up.

I understand all too well the reasons why some people feel the need to drink often and copiously. I've felt the same need for something to serve all the functions that alcohol can. Before it starts to take over and potentially destroy. It can be a tough life and 'deal some pretty mean blows' as a friend recently observed.

It doesn't help that we live in a country which recognises alcoholism as a disability and bestows generous benefits on those incapacitated by it, which rumour has it, many do not use for medicinal benefit.

Somehow an inner inkling that alcohol might add to my problems rather than solve them and coming of age in a pre-alcopop era where you had to get over the horrid taste in order to form a habit conspired to keep me from temptation, and books and old films (and chocolates) became my refuge when times were tough.

I certainly don't think I could have kept my intake moderate if I'd allowed myself to develop a taste for it though, hence my empathy for those who come to need a drink as oppose to wanting a drink (the definition of alcoholism).

But years of experiencing alcoholics benign and bad, and my favourite type, reformed, have led me to several conclusions: -

To summarise, I have a new personal policy where I'll hold onto the friends I have who have triumphed over or assumed control of their alcoholism through strength of character and determination, have learned life's lessons through a major health failure, or who are making strenuous efforts to seek help, but those who cannot be bothered to help themselves or take their lives and friends seriously have wasted enough of my life.


No longer will I allow myself to be heartbroken and sleepless over the often otherwise highly-intelligent and talented individuals I have known throwing their lives away, or naively optimistic enough to believe that maybe I can make a difference or inspire them to wish to recover and that their alcoholism is a temporary state.

However to be too non-judgemental about alcoholism to my mind risks insulting the alcoholic as a helpless victim incapable of turning their life around, even offering complicit approval for them to carry on killing themselves through smiling support, via this act of passive suicide or possibly late self-abortion...
Posted by The Poet Laura-eate at 7:04 pm 9 comments: