The Brighton and Hove We Nearly Lost

This is Regency Hove. Along with the whole seafront from Kemp Town to Hove, it was almost razed to the ground and replaced in the 1930s by 'New Brighton' (see bottom picture). 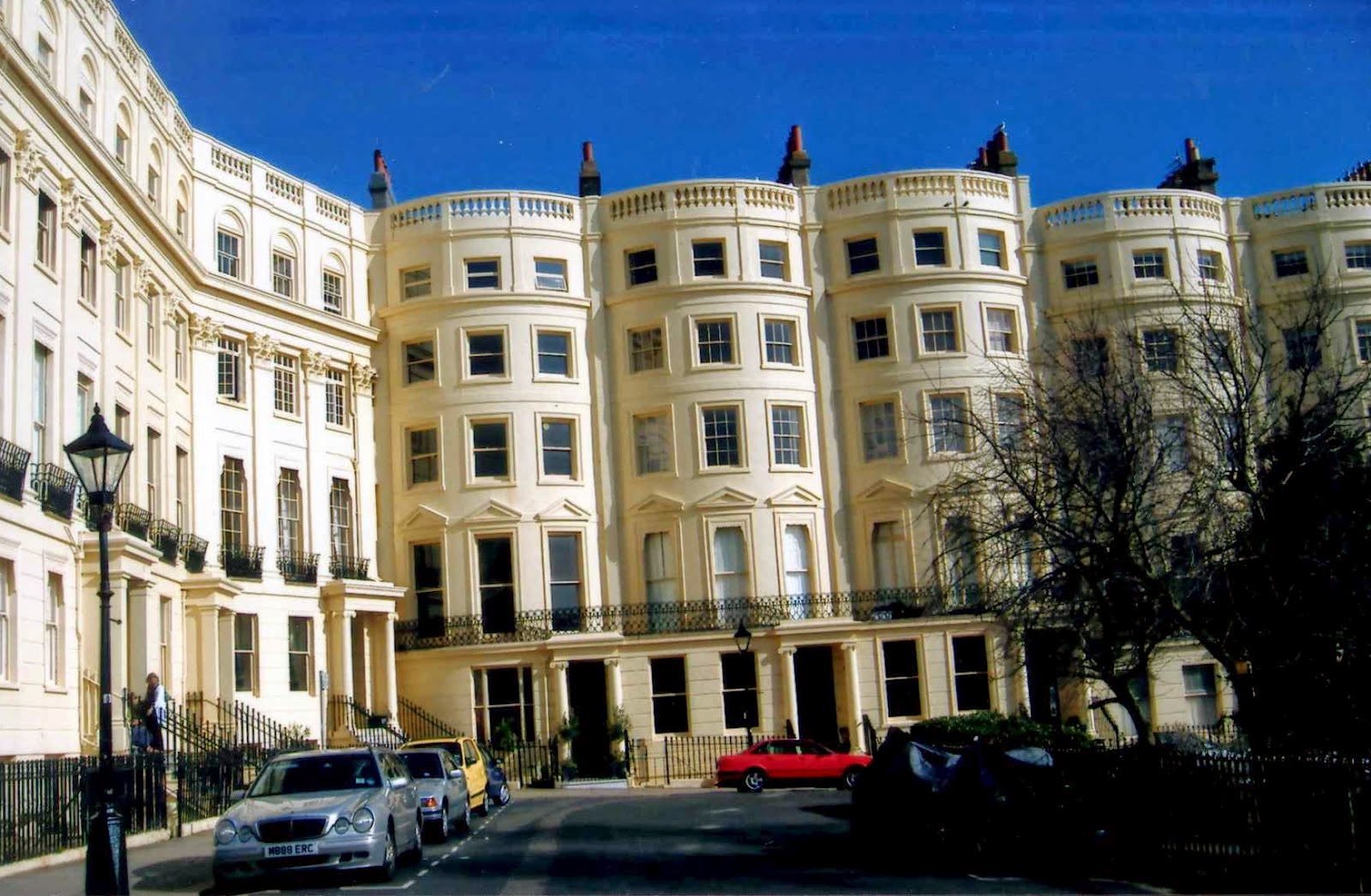 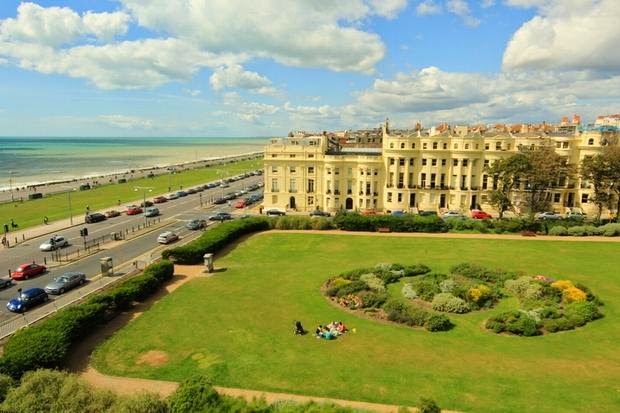 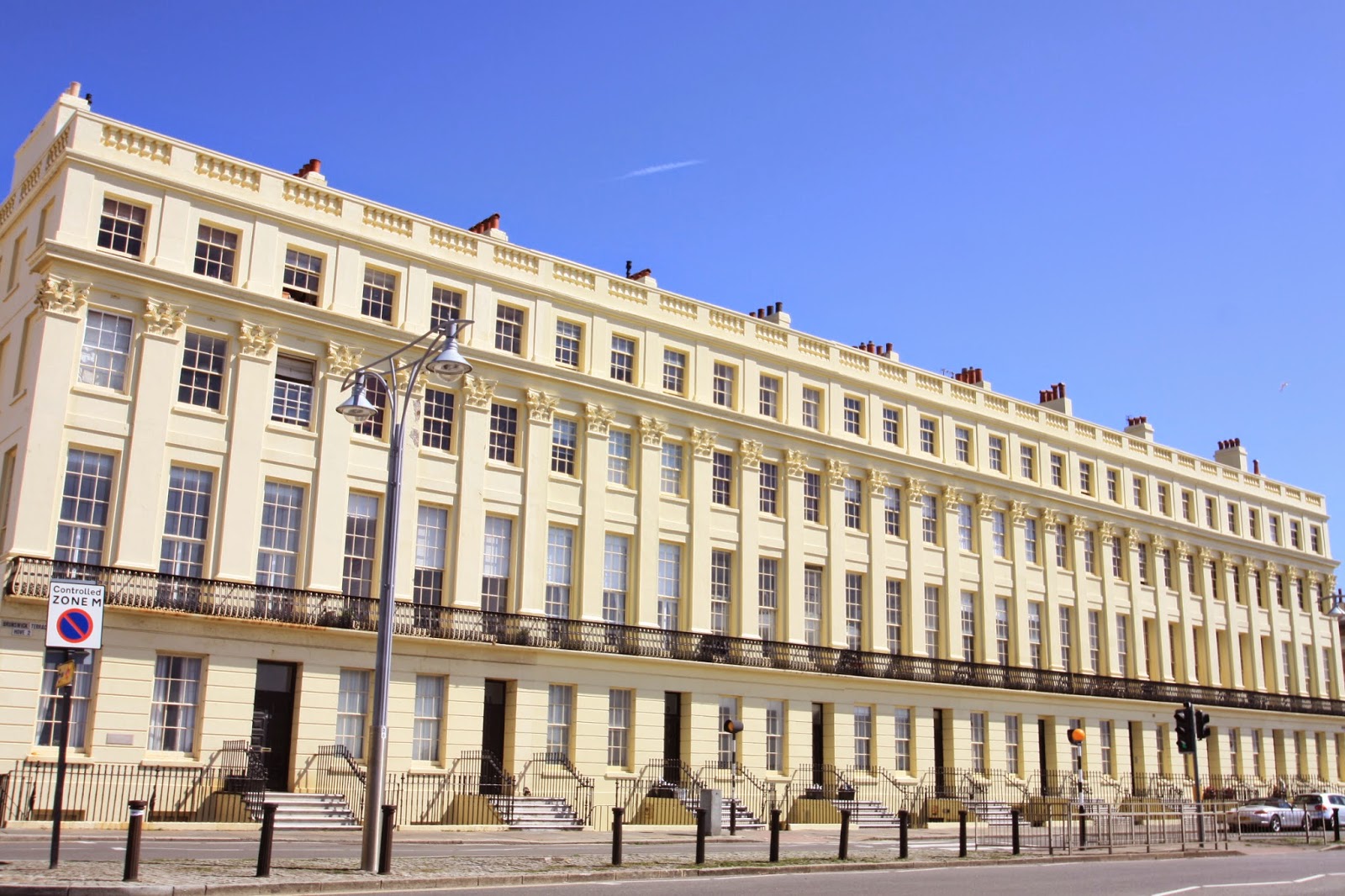 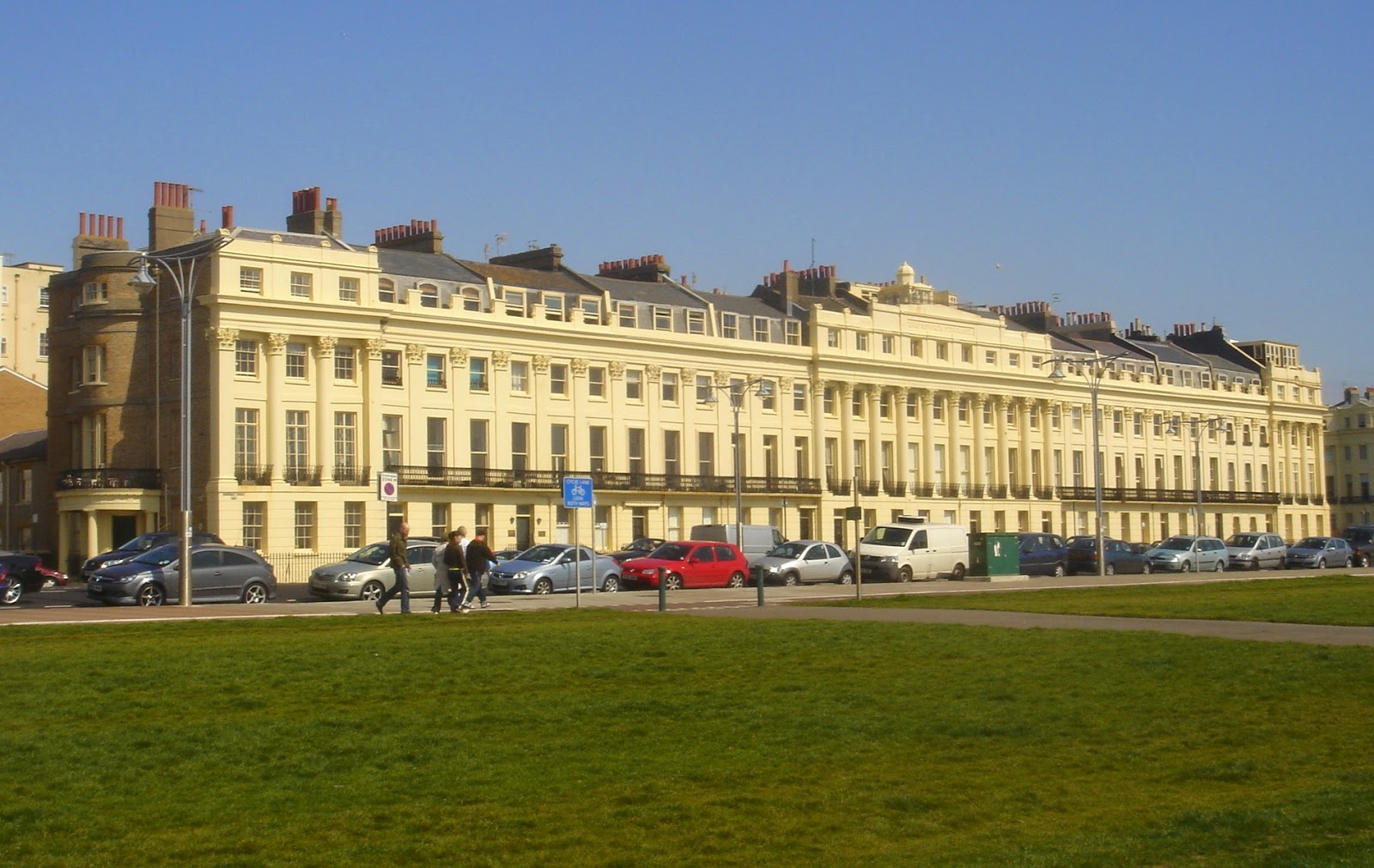 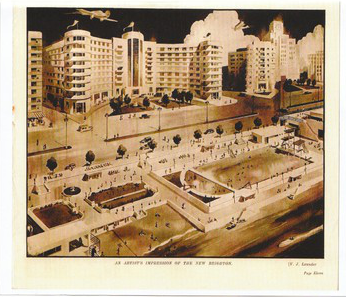 New Brighton was the brainchild of Alderman Sir Herbert Carden, a city councillor who also wanted to demolish this... seeing the Royal Pavilion as a monstrosity and a decadent Royal folly which had had its day. Shockingly he was not alone among the councillors who willed two of Brighton's strongest USP's to oblivion, with not even the picturesque Town Hall safe from his sights.

Alderman Carden was greatly inspired by Embassy Court, the sole modernist building to sneak onto Brighton and Hove seafront in the early 1930s, a leading example of art deco in its own right, albeit 'in the wrong place' as so many have commented over the years. 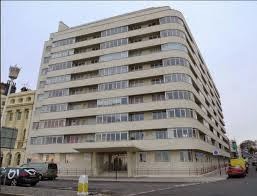 Luckily before Alderman Carden's dastardly plans to make the whole of Brighton and Hove look like Embassy Court could bear fruit WWII broke out in 1939 and his master plan had to be shelved whilst the war was fought. As fortune would have it in 1941 he died.

Shortly after the war ended, a group of Hove citizens, determined that the area should never come under such a threat again, formed The Regency Society, which is still going today. A number of regency buildings are now listed and there are 34 conservation areas within Brighton and Hove though there is still a long way to go to protect all buildings of historical interest.

In his love affair with 'progress'. Alderman Carden also wanted to extend Brighton and Hove as far as Worthing into one super city akin to London.

However Alderman Carden also had a surprising side, for he purchased the entire Downs around Brighton and Hove and later sold them back to the council at cost price to protect them and the water supply of Brighton. Had he not done so, there might be no Devils' Dyke today and the Downs may be considerably more spoiled than they have been. It seems an extraordinary contradiction that he cared so much for the preservation of the surrounding countryside, but sought to take a wrecking ball to the special character of Brighton and Hove, much though he instigated many good things in his forty years with the council, such as the city's municipal tram and telephone systems. But this wasn't the only surprising contradiction in Carden's character. He was an immensely wealthy solicitor and local dignitary born to an old Brightonian family yet was a staunch socialist all his life (which possibly explains his contempt for any building alluding to wealth or decadence).

Less controversially, Carden campaigned for Brighton to found its own university nearly two decades before it did, though he may not have approved of this being plonked on his beloved Downs!
Today he is largely commemorated in the long and winding road linking nondescript estates at the back of Brighton known as 'Carden Avenue.'

With thanks to Andy Garth, owner of that magical emporium of Brighton history known as  Brighton and Hove Stuff in Western Road, who inspired this posting with his prints and encyclopaedic knowledge of, and enthusiasm for. Brighton.
Posted by The Poet Laura-eate at 12:06 am 4 comments:

Save The King Alfred Leisure Centre! 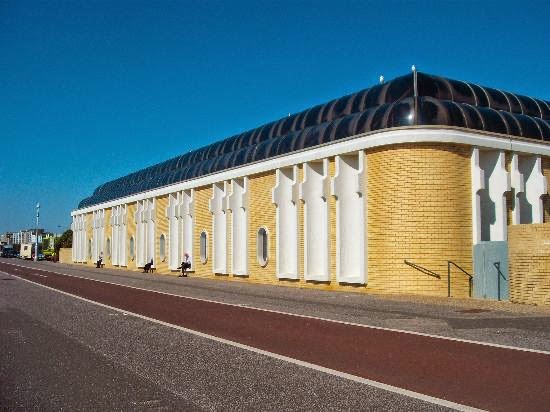 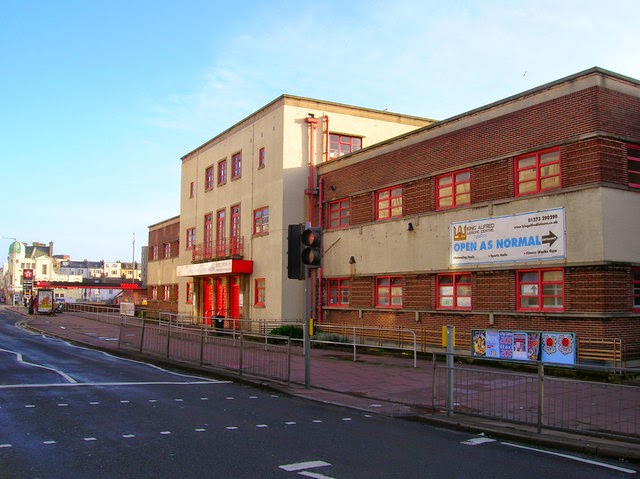 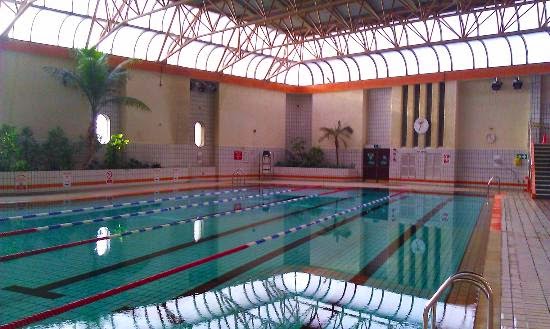 This is the recently-refurbished 1939 Hove leisure centre that the council want to raze to the ground and redevelop into guess what? A £40m leisure centre, albeit incorporating 400 new houses. They claim this course of action would be 'cheaper' than making the existing leisure centre greener and more economical to run! Is it even theirs to sell to developers? It is a municipal facility which belongs to the tax payers of Brighton and Hove.

Aside from the sheer waste, this is not just any old leisure centre but a nationally important piece of maritime war history.

For this building, originally known as Hove Marina and completed just before the outbreak of WWII in September 1939 was requisitioned by the Admiralty and re-christened HMS King Alfred to become a 'land ship' training centre for over 22,500 officers of the Royal Navy Volunteer Reserve during World War II. 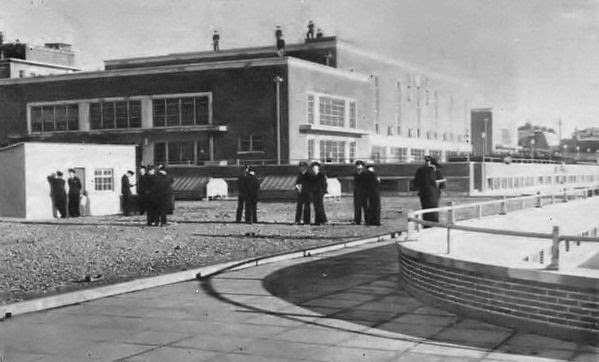 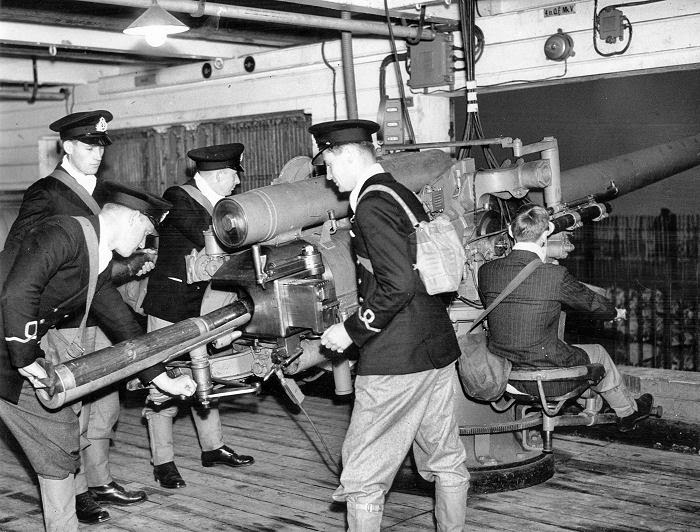 The RNV(S)R had been formed in 1936 for gentlemen who are interested in yachting or similar pursuits and aged between 18 and 39.

Once this intake had been mobilised, the role of HMS King Alfred changed to training new officers of the RNVR. This required a longer course as many members of the RNVR had no experience of either maritime pursuits or the "officer-like qualities" required. Longer courses needed more space so the Admiralty requisitioned two further premises: Mowden School also in Hove and Lancing College.

Training ended in December 1945 and the leisure centre was returned to civilian use in June 1946.

Among the many young officers to pass through its doors were Alec Guiness, Kenneth More, Norris McWhirter, Ludovic Kennedy and Dr Who's, Jon Pertwee, who detailed his wartime experiences in his engaging autobiography 'Moon Boots and Dinner Suits'. It is said the water training tanks are still below the present leisure centre.

I must confess I have a personal stake in this matter for I am a member of the King Alfred Gym and it really could not be better. It is an excellent gym and being council-owned, not as expensive as most, so one of the few affordable sports facilities in Brighton would be lost in addition to a respectable 1930s building and piece of wartime history.

Aside from the leisure centre there is also a privately owned bodybuilding gym and a large ballroom contained within the building, which would presumably be swept away.

There is a tiny glimmer of hope though. There have been many plans and schemes for the King Alfred 'site' over the years and all have come to nought for one reason or another. But there is still no room for complacency.
Posted by The Poet Laura-eate at 2:04 pm 4 comments: 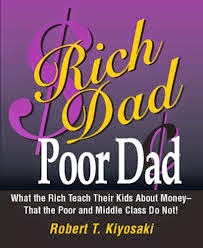 I have been reading a lot of motivational books and books about setting up businesses lately with an eye to the future.

It seems completely obvious if you think about it but one particular book has hit me straight between the eyes with the truth that schools and universities are and always have been intended to prepare children to become employees, not bosses. There is also a social conditioning to fear money so that if you are poor, you fear you'll never have any money and if you somehow become comfortably middle class or even rich, you fear losing it. Money often controls its users, not the other way round as it should be with what is essentially just a tool to facilitate, not an end in itself. This is because there is no financial education to help youngsters overcome this fear and maybe societally, that suits.

Perhaps this explains why 70% of successful entrepreneurs have apparently not been to university. They've been prepared to take chances that more educated people might not.

However the traditional (and still standard) parental advice; 'Study hard, get good grades and you'll get a good job' is undoubtedly somewhat simplistic or even outmoded in today's society where there is no longer job security or company loyalty in the vast majority of jobs, so people may as well take their chances via other routes.

The book is called 'Rich Dad, Poor Dad' and features the advice a young boy received from the two 'dads' in his life, his natural father who studied hard, got good grades and became a teacher, but never a well-off one as he paid so many taxes and the man who became a second father to him, his best mate's dad who taught him how to think differently if he wanted to be truly successful and rich just like him and how he followed that advice and found it worked.

Certainly my grandfather's world where his company looked after him and his family for over 30 years and even had its own theatre and sports centre are long gone for most people, though perhaps the loyalty of yesteryear just made employees less dissatisfied wage slaves than they are now, rather than happy per se, as the engineering work my grandfather did was undoubtedly boring and monotonous, but there was no expectation then that a job should do much more than put food on the table and pay the bills, never mind provide any kind of happiness or spiritual fulfilment. My grandad's generation were just grateful to have survived WWII.

To get back to the book, another eye-opener was the contrast of how an individual is taxed on everything before they know what they have left and then continues to be taxed on spendings,  savings, private pensions and even after death via death duties and benefactors through inheritance tax, whereas a corporation spends everything it wants as well as needs to, and then only pays tax on the rest!

In view of this, I think I'll register myself 'Laura King inc' at Companies House pronto!

I went to a school where there was an unspoken understanding that we were a school of shop assistants and farmer's wives, with perhaps a smattering of teachers. It took me a long time  as an adult to believe I could achieve so much more for myself, other than being able to write and facilitate. On the plus side, I haven't been over-educated, which I have observed in some, can be just as much of a handicap to realising one's true and full potential when it can also lead to false beliefs about oneself plus overconfidence in one's abilities and intellectual inflexibility.