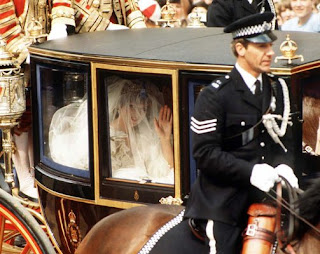 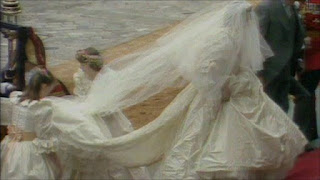 'Rubbishing stuff!' condemned my father from the kitchen doorway, bonfire wellies still on. 'Bloody parasites, the lot of them!'
'Oh stop it' retorted my mother 'Go back to your bonfire if you don't want to watch it and take those dirty boots with you!' A gruff harrumph was followed by the back door slamming.
Such was the day punctuated at regular intervals as my little sister, mother and I gathered round the 12 inch black and white TV set, straining to take in every detail of the pageantry that was the Charles and Di wedding.

We particularly marvelled at the Emanuels' ivory puffball wedding dress which drowned Lady Diana's slight figure and almost served as 'packing material' around her in the carriage conveying her to St Paul's, and wondered how on earth she went to the loo.

My father simply couldn't comprehend the female imperative which made such spectacles compulsory viewing, not least when he had made his views on the Royal Family clear and expected his family to tow his line on this (among other matters).

I briefly wondered what Lady Di was doing marrying such a boring old man, but all the adults seemed to agree the Royal Wedding was a Very Good Thing, the officiators were taking it scarily seriously indeed, and he was a prince after all, and she LOOKED like a princess.  So the grown ups who ruled the world surely knew what they were doing.

Years later I learned that 'loony feminists' had been furiously waving 'Don't Do It Di!' placards just out of camera shot as the carriage wended its doomed way. But the nation demanded its pageant pound of flesh and as Princess Di admitted post-divorce, the T-towels and the tea sets were already printed, so what was a girl to do?

Nevertheless, I still recall it as a marvellous day which brought the nation together, topped by Kiri Te Kanawa's soaring solo in St Paul's and the happy couple did manage to look happy. The sun even managed to shine.

Post Charles and Di, the Royals ultimately learned that it was a bad idea to value virginity and breeding above all other traits in a future daughter-in-law, Consequently Fergie and Sophie enjoyed far happier marriages for being women of the world and age-appropriate to their princely spouses. Whilst Fergie and Andrew didn't last either, at least they managed to part as friends, with no dirty laundry aired in public, and present a united parenting front, enjoying the odd family holiday together to this day.

I do often find myself wondering about a particular wedding present that Charles and Di received though, a set of new goose down feather pillows every year, and wonder how long they were sent for and when they were cancelled by that particular wedding guest. In addition were they ever misused to biff each other over the head with?

As for my father, he is no longer around to approve or disapprove of Royal weddings. However now I am old enough to hold my own views I'd rather live under a monarchy than a presidency, for all its imperfections, and in answer to the mealy-mouthed, I am sure the Royals earn the country at least as much as they cost it in tourism and other revenue. They have even sacrificed the royal yacht and the royal train, for goodness' sake!

Finally latter-day royalty is not without its challenges. I feel sorry for Kate, as having enjoyed national admiration for being a commoner whom William fell in love with and married, she is now chastised for talking with 'a plum in her mouth' and it seems she can no longer put a foot right even though she's tried everything to be the perfect Royal wife and mother, to the point of blandness, for someone who wasn't born to nobility. Sadly for her, she lacks Diana's charisma and luminescence to override every pair of tights being commented on, but maybe she will find her feet in time. Or the cute kiddiwinks will get her through. As long as she doesn't have too many of course in these environmentally-sensitive times. 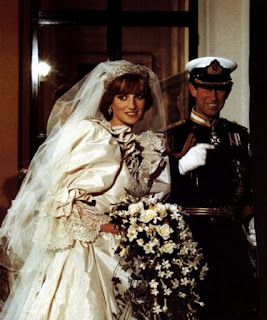 Posted by The Poet Laura-eate at 11:47 pm No comments: