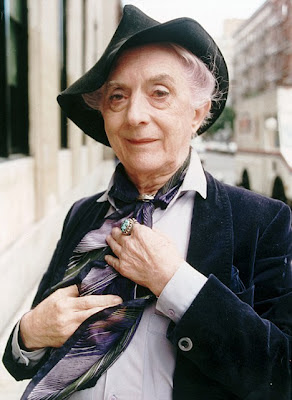 I thought I would reproduce my nomination to Radio 4's The New Elizabethans in honour of the 60 most definitive British figures during Queen Elizabeth II's sixty years on the throne.

The late great Quentin Crisp was not just an Englishman, a Gentleman, a Wit and 'Britain's Stateliest Homo', on queenly par with any real-life queen (as if that weren't enough). He was that even rarer creature - a British philosopher - who endorsed the philosophy of 'being' as well as just 'doing'. He preached the gospel of the individual and how we are each so much more than just a job, just a gender, just an income, just a sexuality.A true ambassador for Britain at its eccentric best, his style, good manners and dignity in the face of adversity and the trauma his uncompromising 'otherness' caused him in a climate of strict illegality were inspirational and he shot from being a nobody (or even the British equivalent of an 'untouchable') to a celebrity at the age of 66 when his autobiography 'The Naked Civil Servant' was dramatised, becoming a surprise TV hit, starring the then little-known John Hurt.

Being so English, it is supremely ironic that it was only when Mr Crisp emigrated to New York in his early 70s as a result of his late-life success, that he became truly revered and appreciated for the 100% British treasure that he was.

He refused to fit the category of 'gay icon' though as he did not believe that homosexuals were any different from anyone else and to ghettoize themselves or demand elevated rights was wrong. This did not always make him popular, but he was used to that. The core of everything he stood for was as follows:

'When You Know What Your Style Is, Then You Will Know Who You Are...'