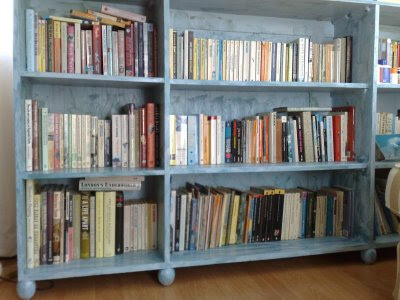 Timely, as it comes just as Richard and Judy are contemplating retirement from our screens, along with their hit television Book Club based on Oprah Winfrey's original model in the US, an idea which in turn led to multitudes of private Book Groups being set up among friends and neighbours up and down the country to either link in with Richard and Judy's or read their own choices. We even had a hit sit com on the subject!

Those of us with published books know how tough the market is out there. Plus publishers give so much money to their celebrity 'author' list in bidding wars or to stop them seeking more elsewhere, they have increasingly little left to offer the real authors on their list. Gone are the days when even a previously successful author could count on another book deal, or even on more than diminishing returns for any subsequently accepted book. It is shocking to realise how many seemingly successful authors, far from living JK Rowling lifestyles are actually struggling to make their mortgage payments each month! But then publishers themselves are also struggling and going to the wall by the week. Though JK Rowling was one of the lucky ones who managed to attain both celebrity status AND successful author status!

It is great therefore to see the rise and rise of that 'novel' innovation The Book Festival in the last ten years, bringing authors and readers together and books alive in a new way. Now almost every town and city has one and authors have nationwide tours much like pop stars, only without the riches! Here's a couple of pictures from The Oxford Literary Festival (one of the original book festivals) last month. In fact such has it mushroomed, last year it spawned the also mushrooming OxFringe arts festival too! 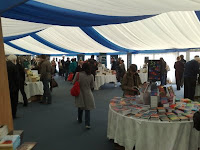 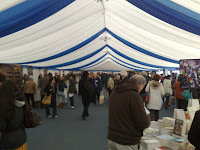 I do hope The Book Channel will similarly blossom for authors and readers alike. It certainly has the increasing paucity of quality content on other digital channels in its favour! So many times I have sat in front of the screen and found absolutely nothing I wished to watch, despite countless channels to choose from. A 'Jackanory' and 'The Book Tower' for adults would be good - I might apply to present! 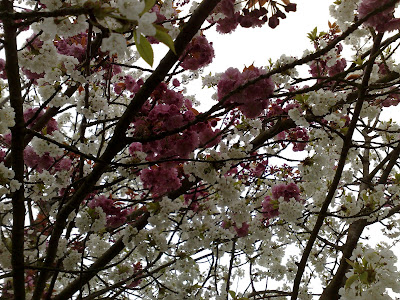 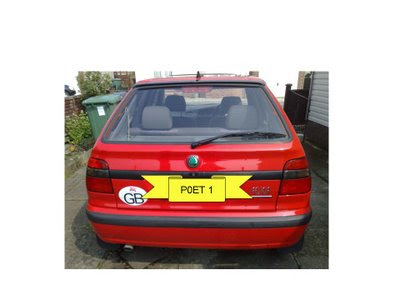 I like red. It always cheers me up to look out of the window and see my little red car.

These are my red shoes. They are not the most toe-cleavage exposing, but they always seem to cause a tremendous stir when I wear them. 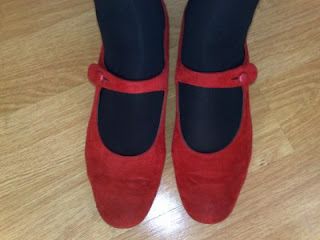 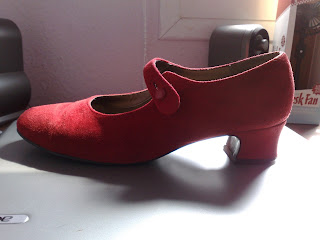 One academic of my acquaintance waxed lyrically about them and when I said I was thinking of getting rid of them as they didn't go with anything, begged me not to.
They are early M&S 'footgloves' circa 1995 and I once had them in black and navy too, but the sensible colours have long since worn out. It is amazing how many people - women as well - ask me where I got them though. I reckon M&S would do a roaring trade if they reintroduced them. Perhaps everyone is as sick as me of rubbish-designed shoes with hardly any uppers to hold them on and heels that cripple. Microfibre is also wonderful stuff, looking as good as new at the dab of a damp cloth. I only tend to wear them for poetry readings now, usually with a jokey Dorothy T-shirt from The Wizard of Oz.

I also own a pair of red ankle wellies which are quite funky, if not terribly well made. 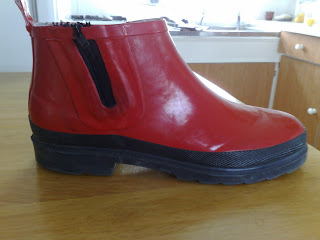 However I feel in need of an extra boost lately. Perhaps I should try some of this(and I thought they exaggerated on female cosmetics!) 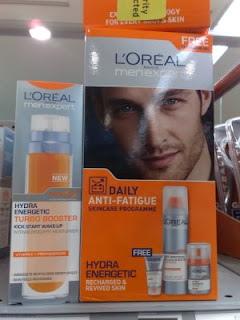 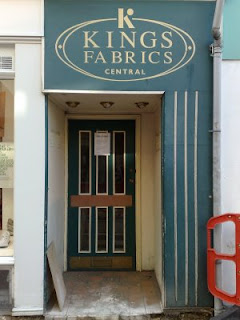 Going to buy a new zip for a pair of jeans this week, I was shocked to find Oxford's only remaining fabric and haberdashery shop had closed down owing to rent increases (according to the sign on the door) after many years of apparently successful trading. Even more surprising in that King's occupied some pretty unprepossessing upstairs premises which you could hardly imagine would command either enormous rent hikes or rival businesses vying for.

This is not the only independent trader to disappear from the Oxford street scene lately after many years, and I can't help wondering why there aren't blanket rent and rate freezes in this recession, as how can it more advantageous to end up with empty units and buildings generating no income at all and causing gaps in the street scene like missing teeth, than landlords supporting tenants through these tricky times? Is it not bad enough that the banks have pretty well frozen loan support to small businesses, without the government and local councils joining in the kicking?

Take Oxford's historic Covered Market for example. Despite being a prime tourist attraction for decades, it has also been under threat for years through exhorbitant rents imposed on the tenants, rents out of all proportion to inflation, and sometimes sadly, to takings.

But it's the Covered Market. What else could go there? What would the vision be for it if all the tenants were forced out?

Then there's the obvious knock-on effect that the more businesses which fail, the greater the number of unemployed, which surely helps no one, least of all the government and economy. And with the demise of our once proud manufacturing base and the much publicised brain drain, if we Brits are now reduced to a nation of shopkeepers and shoppers, support for commerce is needed now more than ever, or what is left?

It seems like a vicious circle. At least in the US, some of the greedy bankers have come forward and apologised for their short-termism and even given their bonuses back. What public atonement and restitution have we seen from any of ours yet, let alone an emergency government economic rescue plan, except for bailing out a few of our more foolhardy, bad bet banks?

Perhaps as one innovative trader has it, the problem with this country is footwear.


Or perhaps we will have to resort to this solution to restore the economy if supply of employees is outstripping demand.

Incidentally I found out why it was a bad idea of Mr Brown's to print more money the other day when a homeless man joked '£30 for a cup of tea, miss?'
Posted by The Poet Laura-eate at 11:15 pm 11 comments: