'Give us your your tired, your poor, your huddled masses, yearning to breathe free.' And take away their libraries!

A beacon is being extinguished, a golden door closed.

Goodbye free literacy for the masses and one of the last public spaces available to interact in with no pressure to spend money, because hey, we've paid for it through our taxes.

The barbarians are well and truly at the gates.

I hereby reproduce the leaked plans to close several of our libraries unless we useless citizens who obviously don't need day jobs put qualified Librarians out of their day jobs by undertaking to run the threatened libraries ourselves, and in community centres and doctor's surgeries rather than the intended premises, which will doubtless be sold off to the nearest greedy developer. Not even the carrot of a discount in council tax offered for an essential public service removed or reduced.

Oxfordshire County Council is asking local communities to come up with innovative ideas to run their local libraries as it proposes to cease funding 20 of the 43 facilities that currently operate in the county, with possible further changes to service levels in future years.

Following the Government's Spending Review and cuts in funding to local authorities, Oxfordshire County Council currently calculates that it will have to save around £155m up to 2015. These savings will need to be made across all of its services and the library service is one of the areas that will have to contribute to making that saving. The council is already on target to make £35m of savings in 2010/11 with a pay freeze and driving down the costs of contracts with suppliers contributing to this.

What is the vision for the future of libraries?

Proposals have been formulated around a clear vision of providing library hubs centred on key areas of population in Oxfordshire with a quality support network of mobile library services and an extension of the library loan service to include e-books and e-audio downloads, so people can get the books they want direct to their home PCs. Residents will continue to be able to go online and order books from an online catalogue. The books can be delivered either to the nearest library hub or to the village/town by the mobile library service for users to collect.

In formulating proposals for a new way forward there has been a strong emphasis on the comparative quality of the public transport links that enable local communities to reach libraries in individual localities and geographical spread. Usage figures have also been considered.

Are these the final proposals?

Changes to the delivery of library services are also being proposed by councils all over the UK - amongst others, authorities in Gloucestershire, Nottinghamshire, Cambridgeshire, Buckinghamshire, Camden and Leeds have recently made proposals for chaThis would see services shaped by community needs and possibly hosted by partner organisations offering space in community buildings such as, children’s centres, community centres, schools and health centres.

Councillor Keith Mitchell, the Leader of Oxfordshire County Council, said: "We have a clear vision to have a quality, core network of libraries based on centres of population. These will still be run by the council and they will be supplemented by mobile libraries.

"In line with the Government's Big Society agenda, we are very keen to hear from local communities and organisations who may wish to take on the running of local libraries and we believe there will be enthusiasm from people who wish to get involved.

"We have agonised over these proposals and I am sure we will agonise some more as our budget position changes when more information on exact funding details is received from Whitehall. However, by announcing the thrust of what we intend at this early stage, we hope that communities have the opportunity to digest and respond to our invitation for them to get involved. I look forward to imaginative ideas coming forward from local people

"Public transport links have made up a large part of our thinking in deciding which libraries we should continue funding. Such links are far better in some areas of Oxfordshire than others - the city of Oxford being an example.

"Our current network of libraries is based entirely on historical legacy. If we were starting from scratch in setting up a brand new Oxfordshire library service, it would not look like the current structure."

Which libraries will see funding cease?

A total of 82 per cent of library visits take place to the 23 libraries that are currently proposed for continued funding by the county council.

Oxford and Banbury have excellent transport links with a high quality bus service meaning that libraries are very easy to reach. Oxford Central Library is accessible to everyone in the city and it is proposed that opening hours should be extended to include Sundays. Cowley Library is also proposed to remain as part of the county council's network of libraries.

Summertown, Headington, Littlemore, Old Marston and Blackbird Leys in Oxford would see funding discontinued as would Neithrop in Banbury.

When will funding cease?

Funding will be phased out during the 2011/12 financial year although there is no exact timetable at the moment. Any further funding changes will be announed in future financial years.
nge in response to changed financial circumstances following the Government's Spending Review.

In line with the Government's Big Society agenda, Oxfordshire County Council is to set up a pot of money to which local communities can bid for funds to help them take responsibility for any library that the council is seeking to end funding.

Was the word 'vision' ever so violated? Andrew Carnegie would spin in his grave. But if this outrage (sorry, 'vision') can be considered in a world centre of academia, you can bet your bottom dollar, no library will be sacred, so guard your libraries fiercely and use them weekly rather than weakly, while you still have them.

I am sure I am not the only one who practically lived in their local house of treasures (Library) as a child and continues to value them highly as an adult. Don't let this government rob you of these jewels beyond price, these hard-won perks of enlightened democracy that YOU will continue paying for whether you still have them or not.

(quote at top misappropriated from Emma Lazarus' famous 'The New Colossus' used to welcome immigrants through the golden gate by the Statue of Liberty in New York)
Posted by The Poet Laura-eate at 12:30 am 10 comments:

World War I - the power of postcards 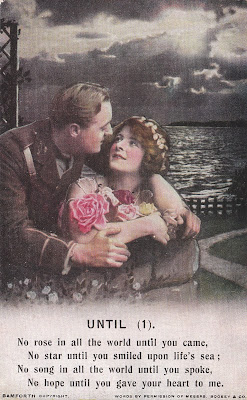 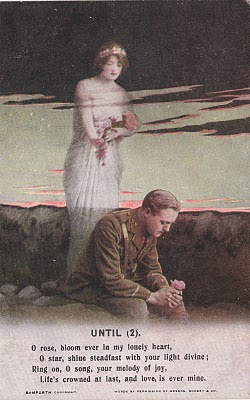 A couple of the famous Bamforth WWI song series cards which sweethearts sent to the Trenches to uplift their loved ones with cheery thoughts of how they were dying for their country which was far superior to mere worldly love and asking them to wait for them 'on the other side' etc. If they wanted to be more explicit they could always use the language of stamp positions listed below, though the War Office soon put a stop to this insisting on direct franking of the cards for postage instead. Cards veered from the mawkish to the maudlin to the patriotic, sometimes quite grotesquely. These examples (spotted at a recent Antiques Fair) represent the entirety of my collection. My friend Lorna Pearson has hundreds, many showing the same players, even wearing the same clothes, only differently hand-tinted and/or coiffured to appear different. She suspects real soldiers were used and hired together with uniform for the day when on leave. Some sets are identical in all but blood - which is shown in the early version, but wiped off in the later version, doubtless under War Office edicts.

Upside down, top left corner = I love you

Crosswise on top left corner = My heart is another's

Centre of envelope, at top = Yes

Center of envelope, at bottom = No

Straight up and down, any position = Goodbye sweetheart

At right angle, top right corner = Do you love me?

At right angle, top left corner = I hate you

Upright in line with surname = Accept my love

Upside down in line with surname = I am engaged

Going Off The Rails 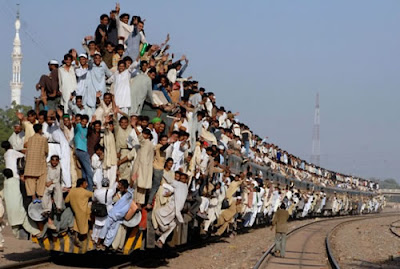 According to today's news, 'Overcrowding on British trains is set to get much worse'.

And this despite the continuing rise in ticket prices out of all proportion to inflation or any other unarbitary known measure.

Many commuters now pay thousands of pounds a year for season tickets, only to be treated no better than cattle and little better than the denizens of Calcutta.

Aeroplanes and coaches are compelled by law to provide a seat for every passenger with a seat belt and to restrict ticket sales according to available seats.

Trains appear to enjoy immunity from all such Health and Safety legislation and an apparently limitless capacity to sell tickets for the same oversubscribed under-carriaged journey.

Medical experts have warned of the increased risk of DVT to passengers forced to stand in cramped overheated conditions for too long.

Not that this prevents sinister 'Revenue Protection Officers' (no longer 'ticket collectors') targetting particular commuter hotspots at rush hour in order to issue tickets en masse to those who've been forced en-masse into the wrong bit of the carriage by the sheer volume of commuters getting on.

Yet our Swiss and German counterparts transport vast numbers of their populace on trains every day with seemingly few problems.

Why is Britain (embarrassingly, land of the train's inventor, George Stephenson in 1822), so pathetic at offering a service even on a par with what the Victorians would have expected, bar the speed when a train actually moves?

The Victorians were miles more advanced than we at providing consistent pricing structures, timetabling and reliable movement around the country and to many more destinations, not to mention providing civilised public conveniences and 'waiting rooms' at their stations, despite being run by a number of different private companies. Their open-carriaged 'Third Class' does not sound so bad after all once you've sampled a peak-time London train (another reason my heart sank when we won the bid to host the Olympics in London next year).

As for the Green arguments for rail travel, I would counter that the appalling conditions and exorbitant price of rail travel are more likely to drive people into the arms of their nearest car showroom dealer than otherwise. At least they get to die in the comfort of their own posture-adjusted seat when terminal gridlock finally sets in.
Posted by The Poet Laura-eate at 11:10 pm 8 comments:

I took these photographs of Oxford some time ago when I was seeking possible images for a book of local short stories. In the end, something completely different was chosen as is the way with these things. However I thought I would share them anyway.