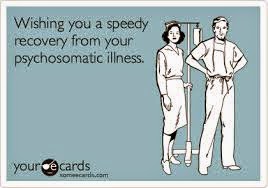 My stomach protests what it can't digest
My incisors hurt when I'm indecisive
My limbs stiffen when I'm inflexible
My blood goes anemic when I lack iron
My heart aches when it's broken
My voice is lost when things go unspoken
My nose runs when I'm run down
I risk the big C if I let things eat away at me
Whenever I risk going off track
My body gives me a symptom
to nudge me back
But why, oh why, doesn't the bloody thing just send me an email?

Service With A Surl 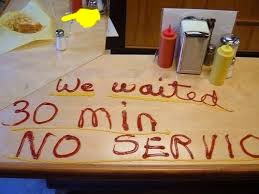 It never ceases to amaze my partner and I how with probably the greatest competition outside London, any Brighton cafe dares to provide poor customer service.

Last Saturday, exhausted by our efforts to find a suitable birthday present for my partner's father, who, with his Alzheimers, can no longer relate to most of the things he used to love, we flopped into the nearest cafe for a drink in the new Lanes.

From the outside it looked inviting with its colourful mosaic walls, but no sooner had we crossed the threshold of someone's romantic dream of a Greek Taverna than a guy barked at us, 'We're not doing hot food!'. No apology, no explanation, but we only wanted a drink anyway so made the mistake of going in. Our drinks then proceeded to take so long to arrive we would have walked out were it not for our large collection of shopping bags. We also had time to notice how shabby beyond chic the place was with its crude plaster cave-like coving, bad paintwork and half the chairs missing part of their backs. The brusque male server then jostled me out of the way, again with no apology, to open the ill-positioned cake cabinet for someone else's order. Just as well my partner's coffee arrived, served by a meek skinny eastern European girl who seemed somewhat cowed by her male colleague/boss, for about a moment later, the rude colleague shouted to the kitchen staff; 'That's it! We're out of coffee.' We nearly choked on our drinks. A cafe out of coffee...? And if so, why didn't he just go round the corner to the supermarket to purchase some more? It was only 3.30pm. How did he propose to carry on for the rest of the afternoon?

'Never again.' we vowed as we left the cafe, oddly branded 'Inside Out' when perhaps 'Upside Down' would have been more apt. In future we shall listen to any alarm bells going off in our heads when we enter a place which is meant to be an enjoyable experience.

It has been a tough time for my partner. He has been made redundant, his dad has been getting sicker with Alzheimers to the extent my partner has to keep reminding him who he and his brothers are and that they are his sons and he is their dad, and what their names are. My partner has also suffered health issues and to cap it all he had an unpleasant encounter with his ex the other week when she confronted him at the local tip where he was disposing of allotment waste and told him to 'F**k off or I'll call the Police!' He was shocked but admirably restrained in the face of such a ridiculous threat and did not retaliate. He always fears making things any worse re the children, whom he has now not seen for almost three years, so in a sense, how could things get any worse? He did not even sue his ex when she made false criminal allegations against him during his legal bid to win access, presumably in her efforts to turn the children against him, which I advised him he should as she shouldn't be allowed to get away with that (even though the Police and Social Services evidently didn't believe her and take things further or even tell my partner the allegations had been made! It is only in the courtroom they emerged). Again, he feared it would cause further upset to the children to sue their mother, though I pointed out that legally clearing his name might actually do some good in that regard. However ultimately it has been hard to know what to do for the best and so many things my partner tried seemed to just backfire on him or make things worse. Even presents and cards have been sent back immediately and if he dared to telephone the house (which my partner did about twice), a threat of Police Harassment would swiftly follow or a string of abusive or silent calls would be received by other members of his family.

But being so mad at him three years after they split? Well I suppose his ex has to maintain that level of anger towards him to justify some of the stuff that she's done by way of revenge. We do find it strange though, considering she had apparently wanted a divorce for years, so why isn't she now happy to have her wish and freedom at last? Why isn't she moving on with her life?  It can't be doing her any good to be eating herself up with so much bitterness, let alone their poor children, who might be young adults now, but who are surely still suffering. When will she finish punishing my partner/them? When will she feel that she has exacted her pound of revenge, all is now square and peace can break out between all parties? Even a prisoner knows when their sentence/punishment will end, but not my partner re this situation.

On the plus side she has released a lovely man back onto the market who is now with a partner who truly appreciates him. His parents are also seeing more of him than they have in more than 20 years (his ex never liked him seeing them for whatever reason, particularly in latter years), and at the point in their lives when they need him most.