How I can relate to those words. It seems to have been a financially ruinous time just lately, notwithstanding I am earning less in my current job than I used to. The MOT, insurance and road tax on my car was all just about budgetted for but then my hot water tank decided to split (which my insurance won't cover as they consider it a 'wear and tear' issue) and my laptop decided to go haywire and one of my back teeth decided it needed a crown. Meantime my home insurance is rapidly approaching, my home needs reinsulating before the winter and the telly has now decided to go on the blink! And did I mention the five faults they found on the car which whilst not preventing it passing its MOT will need attention before long? Then there was the unfair parking ticket which I failed to get repealed and which mounted. As for that defunct garden pond with no water remaining in it, well that is last on the list.

Despite not smoking, drinking or indulging in designer handbags or exotic travel, and inhabiting cheaper housing than many, I seem to be spending money at a much faster rate than I am earning it at the moment. If I had a child I would probably have to sell it to a wealthy American couple.

Unfortunately I was rejected as a People's Peer, where I could probably have lived off the expenses alone.

I do find myself spending an inordinate amount of time watching people in city centres lately and wondering how they all seem to be able to afford whatever they want. Luckily most current fashion is too hideous and unflattering to possibly tempt me and I am old enough to know expensive cosmetics are no more magical than high street own brands.
Posted by The Poet Laura-eate at 7:27 pm 8 comments:

Best in Class (or possibly not)

Slack-hipped in slouch jeans, they waddle across the road as if they haven't a care
Contemptuous bovine stare for any motorist who might dare
To urge them to hurry their pace or perhaps deign to look before they cross.
It's as if the Green Cross Code Man never was, as if they don't give a toss
For their own lives or yours, even without substances filled,
Kamikaze cyclists whizz past just as badly in need of Highway Code drilled.
Yesterday I affixed a student chaser to my front grille
To avoid another garage bill
When I got home I found a brace of students neatly scooped
Which I will hang until gamey and tasting of goose.


Rather worryingly I have seen increasing numbers of older people seemingly just as blase about their health and safety and regarding cars rather as a ruminent might if one entered its field.
Posted by The Poet Laura-eate at 9:51 pm 7 comments: 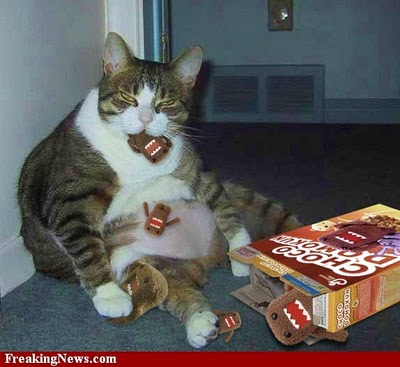 For the past three weeks I've been afflicted by what can only be described as the adult version of Whooping cough, so very little sleep and a throat so sore I've needed painkillers to brush my teeth! It's proved resiliant to all attempts to treat it though it seems to be finally passing now, along with accompanying eye infections which also make it hard to sleep or concentrate. The good news is that a diet of fruit and ice cream at midnight (when I wake myself coughing) has led to shedding a welcome half a stone!

Which brings me to the subject of supermarkets. I seem to have been visiting mine more than usual lately in search of cool and soothing things to tempt my non-existent appetite and have more than once felt like the last thin person walking around, aside from a few obvious anorexics and students who haven't lived long enough to pile much on. I've even seen some body shapes in my local Tesco which appear to defy physics. Worse still the body-hugging vests and leggings many obese individuals choose to wear are even crueller and more unforgiving than this blog post. They're also starting younger - a growing number of youngsters seem to have no waistline at all these days and look podgy from the age of about 6, much though I wouldn't want us to go back to some of the freakily small waistlines of the 1950s. Then there's the strange rolls of fat many seem to develop in the place they might once have expected to find a waist, even if they still have flat stomachs. Is evolution really bowling along at such an alarming rate, or is some kind of foodstuff responsible for this?

This has all happened in the last 10-15 years. There was no such emphasis on food when I was growing up in the 80s and food certainly wasn't 'sexed' up in any way. Nor were painfully slow and basic steam-driven computers much of a temptation from a healthier lifestyle. As for drunkenness, that was a shameful thing which only students and alcoholics indulged in. For the rest of the populace a couple of 'jars' or an occassional glass of wine (a much smaller glass than today) was more the norm.

I've now formulated a theory that the reason there are such a disproportionate number of disproportionate people in supermarkets is that for some, the trip to their 'dealer' for their next fix is their only outing of the week and they are more or less housebound the rest of the time, either through self-imposed exile or simply not being physically fit enough to go out much (and did any of us ever expect to see a TV advert for a cream to prevent 'chafing' as you walk?). You can apparently actually claim benefits too for being 'too obese to work'. More time to devote one's life to looking for BOGOF's then, though one wonders in what perverse way it suits the government to have such a policy rather than regard it as an individual's own responsibility not to get into such a state.

It is certainly ironic that being fat was historically a sign of wealth as only the rich could afford to gorge themselves, but in this day and age it has become a sign of poverty and reliance on cheap filler foods of low vitamin content (hence the body's continual hunger until it reaches its minimum nutrient quota, many portions later). Either that or there's one heck of a lot of undiagnosed thyroid conditions around.

Anyway, never mind all this, when is she going to mention the football? I hear you cry! Doesn't she know there's a world cup on? (bloody TV repeats!) Well what can I say? Overpaid, overlaid, they're minted whether they win or lose, so why would they care? They don't even care enough to learn the words of their own national anthem for goodness' sake. But since my fellow countrymen are even more obnoxious winners than they are losers, I for one am delighted there wasn't a cat in hell's chance of 1966 happening all over again. That'll teach John Prescott for selling off all the school sports fields (did I really read that the A-hole was going to be honoured with a knighthood the other week?) Though doubtless England's devastated (never merely 'disappointed') fans went out and drank just as much to lament as they would have done to celebrate.
Posted by The Poet Laura-eate at 8:50 pm 11 comments: