Life's Too Short To Wax A Lemon 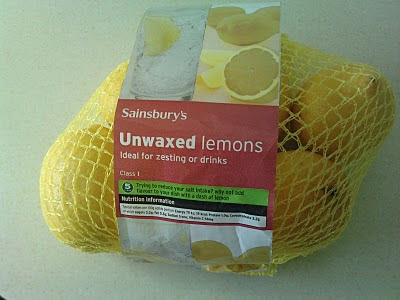 But I'm sincerely wishing fellow blogmate Kaz all the lemon-waxing time in the world. If you've never visited Kaz (Idler), she is one of the wittiest, most stylish and youngest pensioners around who takes her inspiration from AbFab's 'Patsy' but there's so much more to her than that.

Kaz is currently battling ovarian cancer, so is sometimes too weak to blog, but appreciates all your messages of support, so please do pop over and pay her a visit.

And if the more religiously-inclined among you would like to pray for her to confound her doctors with a spontaneous remission of miraculous magnitude, I'm sure she'd appreciate that too.

However sometimes our endlessly merciful Lord does have his limits.... 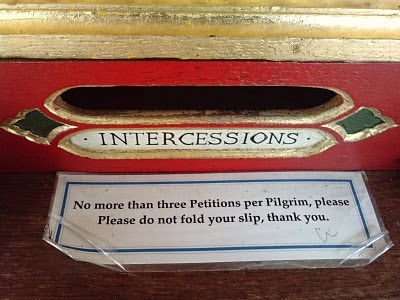 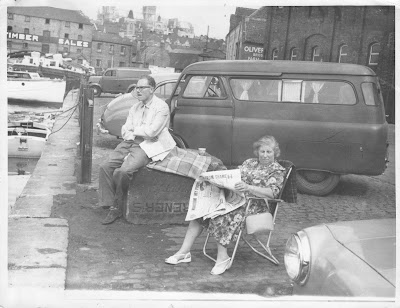 These are my paternal grandparents Ernest Sidney King and Lilian Rose King who hailed from and lived in Coventry all their lives. However every summer they climbed into their Bedford Dormobile and followed John Betjeman's Shell Guide exploring various corners of Britain. They held little truck with 'abroad', though they once managed a weekend in Versailes and on another occasion, a day trip to Calais. They flew only twice in their lives - to see we grandchildren in Northern Ireland when they were getting on a bit to manage the long drive up to Scotland to make the ferry (and they were pushing 70 by the time we were born) 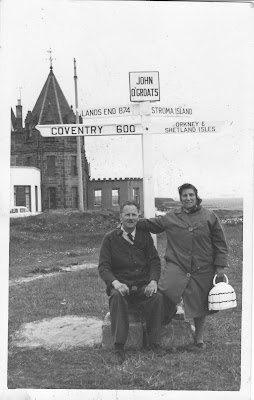 One of the high points of their travels was reaching John O'Groats. 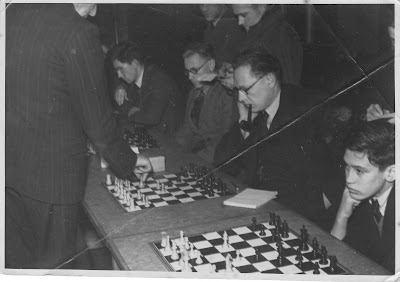 My grandfather (second right) enjoyed chess. He also acted in plays put on by his engineering company Brico, and had roles in JB Priestley's 'An Inspector Calls' among a number of other productions. He was a quiet and highly dignified man who announced his presence with the sweet scent of a herbal tobacco pipe, but if you asked him something he would immediately light up and go to great lengths to explain it to you. No one dared to open the Coventry Evening Telegraph each night before he had read it and commented wryly on what the powers that be ('they') were up to now. He handled all his possessions with a kind of reverence, as if they were the most precious objects, and was of that generation who would warm up the television set (never the TV) for ten minutes before watching it. He once became quite animated when I used his Parker pen nib to slit open the cellophane around a jigsaw - as if I had committed the greatest act of negligence. I was careful to ask permission to use his things first ever after. I know now that he grew up in a very impoverished family, often going to bed hungry as a child, though many who survived WWI went on to make quite a success of their lives including my grandfather. When he retired from work as a factory Foreman he was given a huge music centre in an unwieldy walnut cabinet and a large early colour box television set in matching walnut, so they must have thought a lot of him. 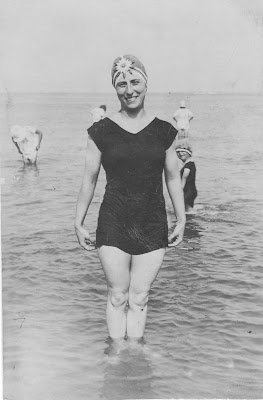 This is my grandmother Lil in her younger days. She always had a lucky streak with the bingo and won at least as much as she lost, including sometimes bizarre prizes such as candlewick bedspreads. Each of her sucession of cats was trained to walk down to the end of Loudon Avenue to meet her at 4.30pm precisely and accompany her the rest of the way home. She liked to fancy she had a sixth sense and told me that when she and Ernest were walking home one evening after a wartime bombing raid, she had a bad feeling and insisted they walk a mile out of their way to go home. Grandfather was reluctant but eventually agreed. Later on a bomb went off in middle of the street they would have normally walked home down. She was full of stories about everyone in the street, who'd died and who hadn't, how the bodies were laid out on the green after the bombing raids, and was somewhat proud they were the last original residents from when the street was built in 1926, though I took her story about having a miscarriage after the hun flew low over the garden and smirked as she saw his swastika, with a pinch of salt as the explanation for why she'd only had my father. One of her proudest moments was getting a job in the Co-Op department store Offices at the age of 64, when they didn't take on anyone over 60 at that time. This she had done by claiming her birth certificate had been 'lost in the blitz.'

My grandparents were also very green

The cornerstone of their marriage seemed to be the joke that one year Grandpa asked Grandma what she would like for her birthday. She had replied 'a goblin', meaning the brand of vacuum cleaner. What she got was a garden gnome.

SplutterSplutter (the new name for TalkTalk)

Ever since I ran into a highly personable female TalkTalk rep who stopped me to admire my earrings in a shopping centre just before Christmas and then proceeded to convince me my life would be transformed by saving £2 per month over my previous internet provider, I have lived to regret it. My home broadband has become unreliable and as slow as hell. Any sort of internet activity has become a slog requiring the patience of Job.

Complaints to TalkTalk either fall on deaf ears or solicit the bland script-inspired response that the area I live in must be at fault.

Must be that new mountain range that's sprung up in the middle of Oxford then.

I have now escalated my complaint to Ofcom pointing out it is most unfair to hold customers to 18-month contracts if little or no service is being provided and the contract is therefore being breached on the service provider's side first. They promptly referred me back to TalkTalk, not quite fulfilling the suicide risk criteria needed for Ofcom's consideration.

Checking my broadband speed against 'the internet's leading Broadband speed checker' the other night I am getting 2344 Kbps download speed out of the 1Mb-5Mb I should be getting for my postcode location.

Meanwhile there's the matter of all those hours of my life I will never get back trying to do the simplest things. And my poor much-neglected blogmates.

And did I tell you the one about the new LG camera phone which won't download pictures to my PC and how many hours I've wasted on that only to discover it is probably a software fault inside the phone all along and not my own bumbling incompetance (as inferred by those oh-so-helpful LG call centre staff)???

I'm an artist I tell you, an artist!!!!! I shouldn't have to concern myself with such triviata as battling telecoms companies. Isn't it bad enough I have to work for a living rather than gazing from my garret all day long, quill in hand? What would Lord Byron do in my shoes I ask myself?

Totter a bit. Probably.
Posted by The Poet Laura-eate at 9:32 pm 12 comments: 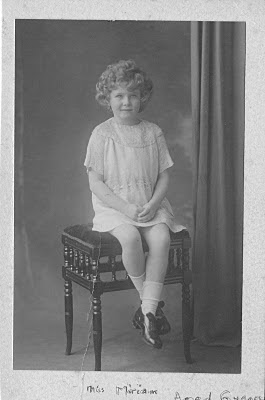 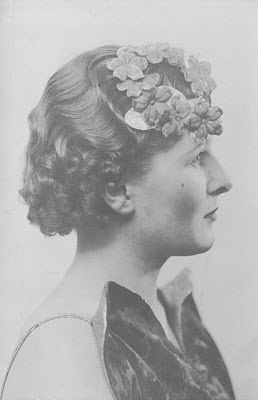 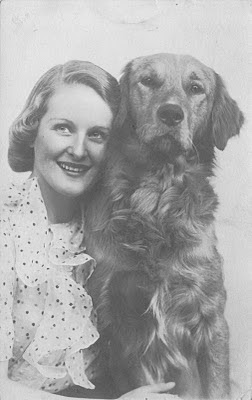 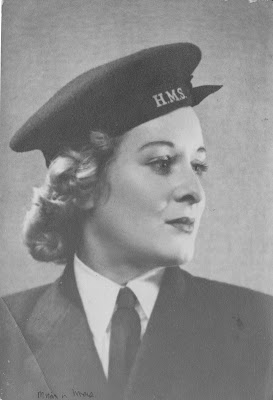 I have just returned from a parental visit to Northern Ireland, where access to the internet has been very sporadic indeed and half the £1-for-10-minutes public terminals don't work. To amuse myself amidst the dispiriting chaos of my parents' home and lives in which no one is allowed to intervene except for washing up and sharing the driving, I tracked down the family photos, which had rather shockingly been consigned to rot in a broken 30s suitcase in an outhouse, many stuck together or ruined by mould and both maternal and paternal families mixed up to the extent that if there was someone we couldn't identify, they could not even be narrowed down to which side they might be from. Very few were labelled. Luckily 'Mirrie' survived.

'Mirrie' was the glamour girl of my paternal grandmother's family who could have almost been a 30s film star, but became a doomed air hostess instead. Gold-watch deserving readers of this blog may recall the narrative poem I wrote about her here At the time I had no photographs to go with it, so it is nice to put some up at last.

I learned that she was the daughter of Walter and Miriam Gunn. Walter served in WWI and was an ARP warden in WWII, before rising in civvy street to become Manager of Pearl Assurance in Broadgate, Coventry. After their daughter Mirrie was killed in a plane crash - I'm assuming sometime in the 1940s since she evidently lived to be a Wren in WWII, her parents left Coventry to assuage their great grief by running an antiques shop in Brighton, their daughter's belongings locked in the attic having been sent back from the African Cape where she died.

The battered old familial bible states Walter Gunn's date of birth as 12th January 1894, so I will endeavour to order a copy of his death certificate and see if I can dig up some more family information. Unfortunately anyone who might have known the family is likely to be dead and my father has never taken much interest in his family, even before the onset of dementia.

Like Steerforth at Age of Uncertainty, I always think it compounds the tragedy of human loss when that person is entirely forgotten down to the last photograph being disposed of or carelessly allowed to moulder out of existence. Whilst I don't kid myself any of my ancesters had an easy time of it, there is a charm about old photographs and the lost grace and sense of Britishness they portray. Few photographs taken today are likely to be as evocative. In fact I regard old family photographs as the nearest thing to family silver.
Posted by The Poet Laura-eate at 11:08 pm 9 comments: