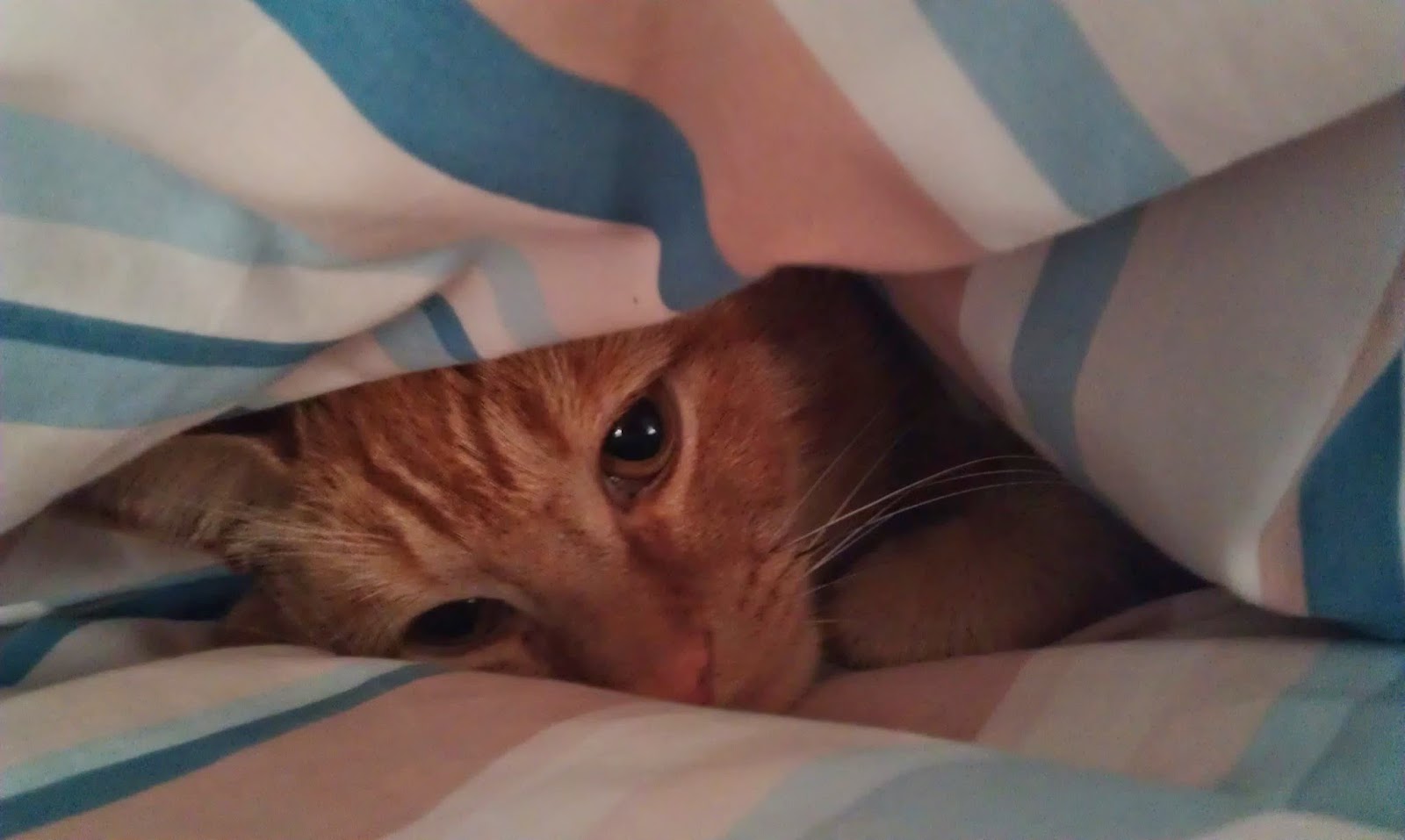 He gallops like a foal, he climbs like a monkey, he sits on your shoulder like a parrot. He wrestles your slipper, he ambushes your ankles as you walk along and tries to climb your legs as you serve his dinner, when not weaving repeatedly through them, trying to trip you up. He tears along the corridors playing football like Suarez (he bites!) with a ping pong ball. He 'talks' incessantly. He eats like a wolf and still wants to try everything that we eat. He's fascinated by water and is constantly following us into the bathroom to watch taps flowing, tip-pawing perilously around the edge of the bath or basin and miaows and scratches loudly at the bathroom door if we beat him to it. He climbs into every cupboard. He can take off his own collar and open his own locked cat flap.

At night he trots up from the foot of the bed to sit on my chest, bunt me on the nose with his and settle his head under my chin until I am hot enough to melt. In the day he wants to play - most of the time. He makes short work of any inflatable toys we find left on the beach. He likes walking across computer keyboards and selecting records for the turntable. He has a decided preference for punk. He demands priority over anything else you may be doing, by pointedly lying across newspapers and poking his head over books. His purring is no more than heavy breathing, but his grin is constant. He does his own version of the 'Eric Morecambe' curtain routine by pretending he can't get through cat flaps or out of his box litter tray, pummelling at them like a mime artist, waiting for you to let him through. It is hard to know what manner of beast he is, but he doesn't seem like a cat. He doesn't even sit like a normal cat, but continually sprawls across sofas and beds, long and stretchy.

He is a demanding yet hilarious feline and we suppose that his previous owners must have abandoned him, finding him too much for them. My partner has even written a song about him to which Mr Cheeky listens dutifully.

After a lucky escape following an argument with a car weeks after we got him from Lost Cats Brighton, Mr Cheeky has made a full recovery and goes out in the day to hang out with his cat friends and visit the neighbours, who have found they have no choice but to like cats even if they were ambivalent before. At night it's curfew time, or should I say 'catfew' time and the cat flap is locked after dinner. 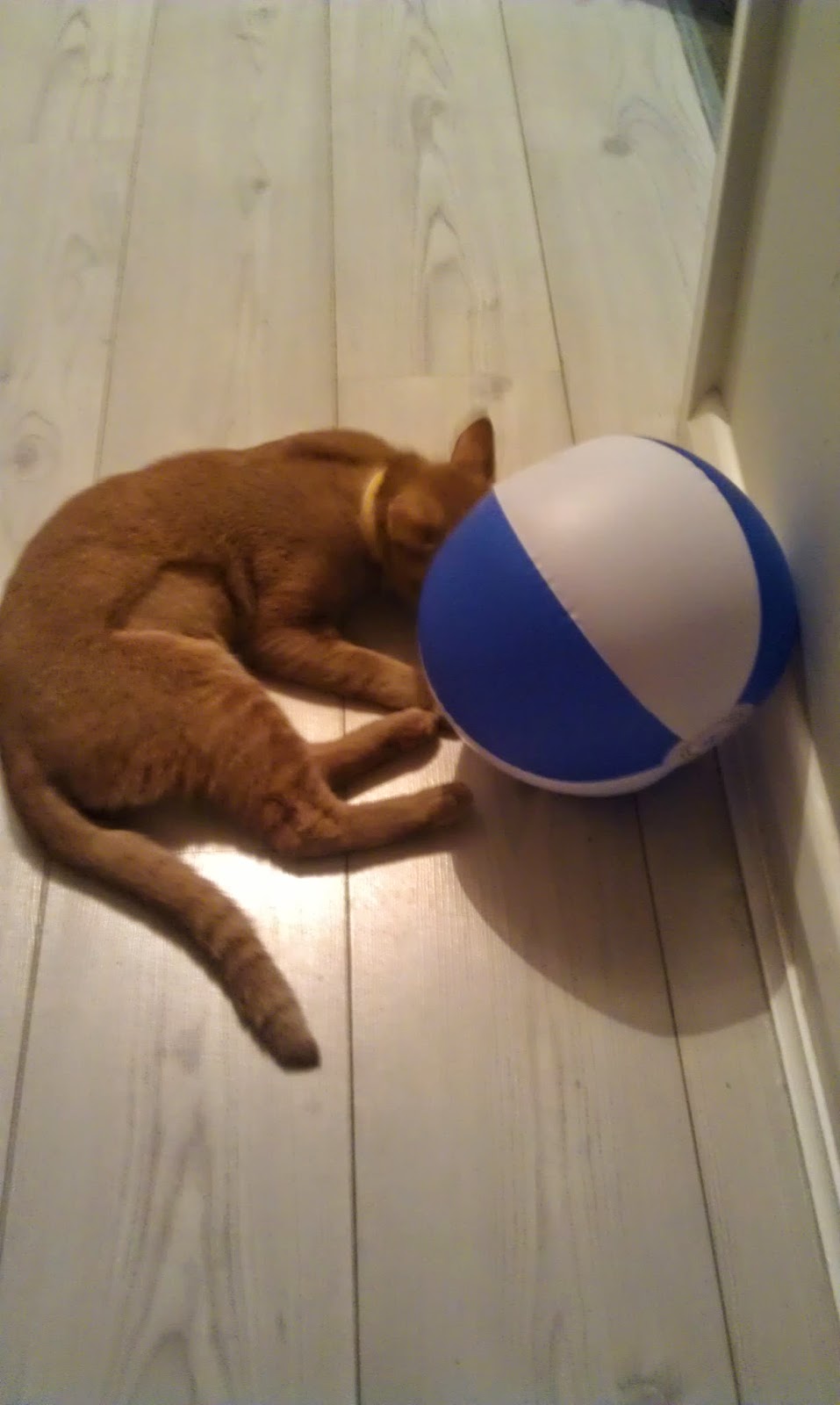 Mr Cheeky with a beach toy, shortly before its demise... 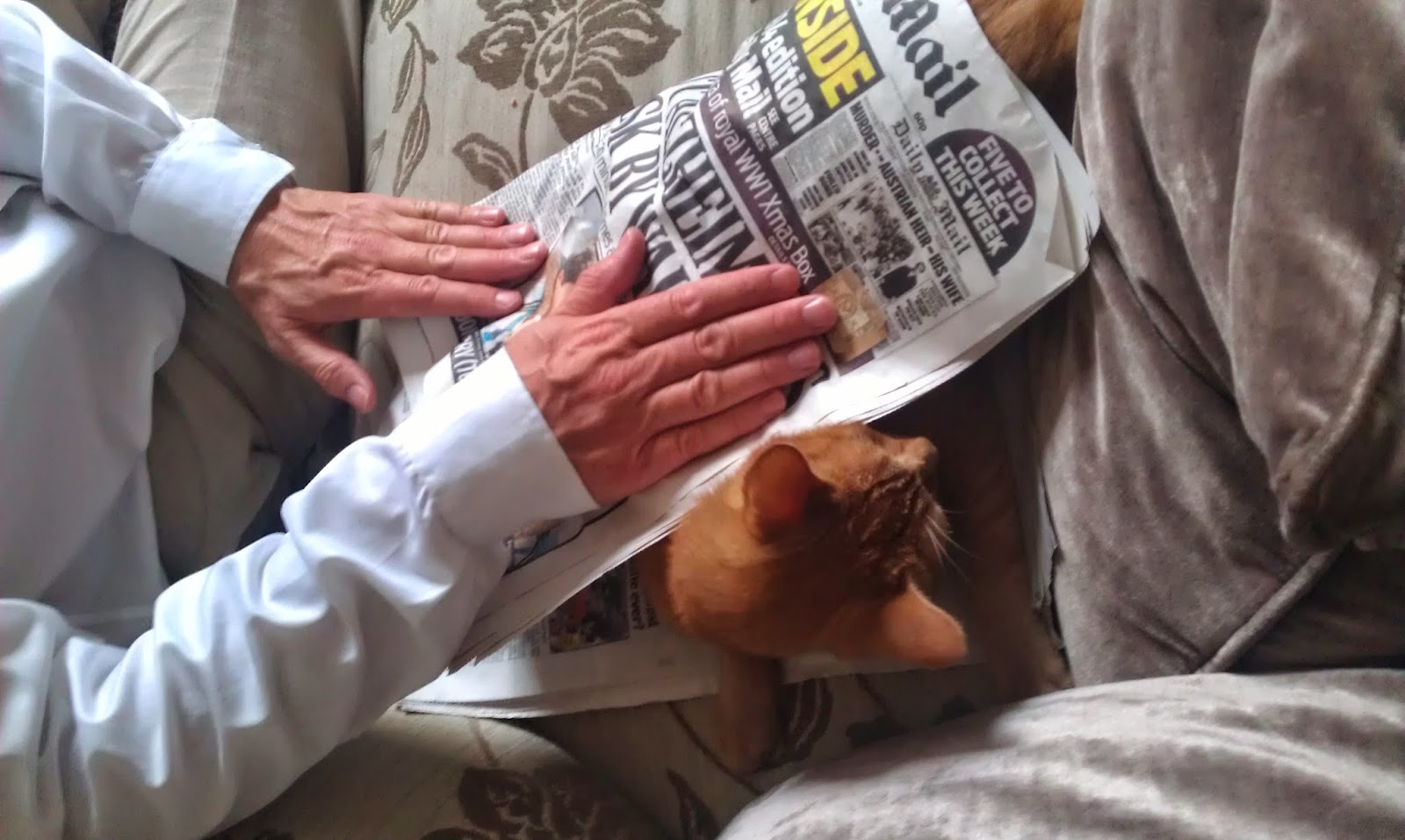 Amazing what you get free in the newspapers these days... 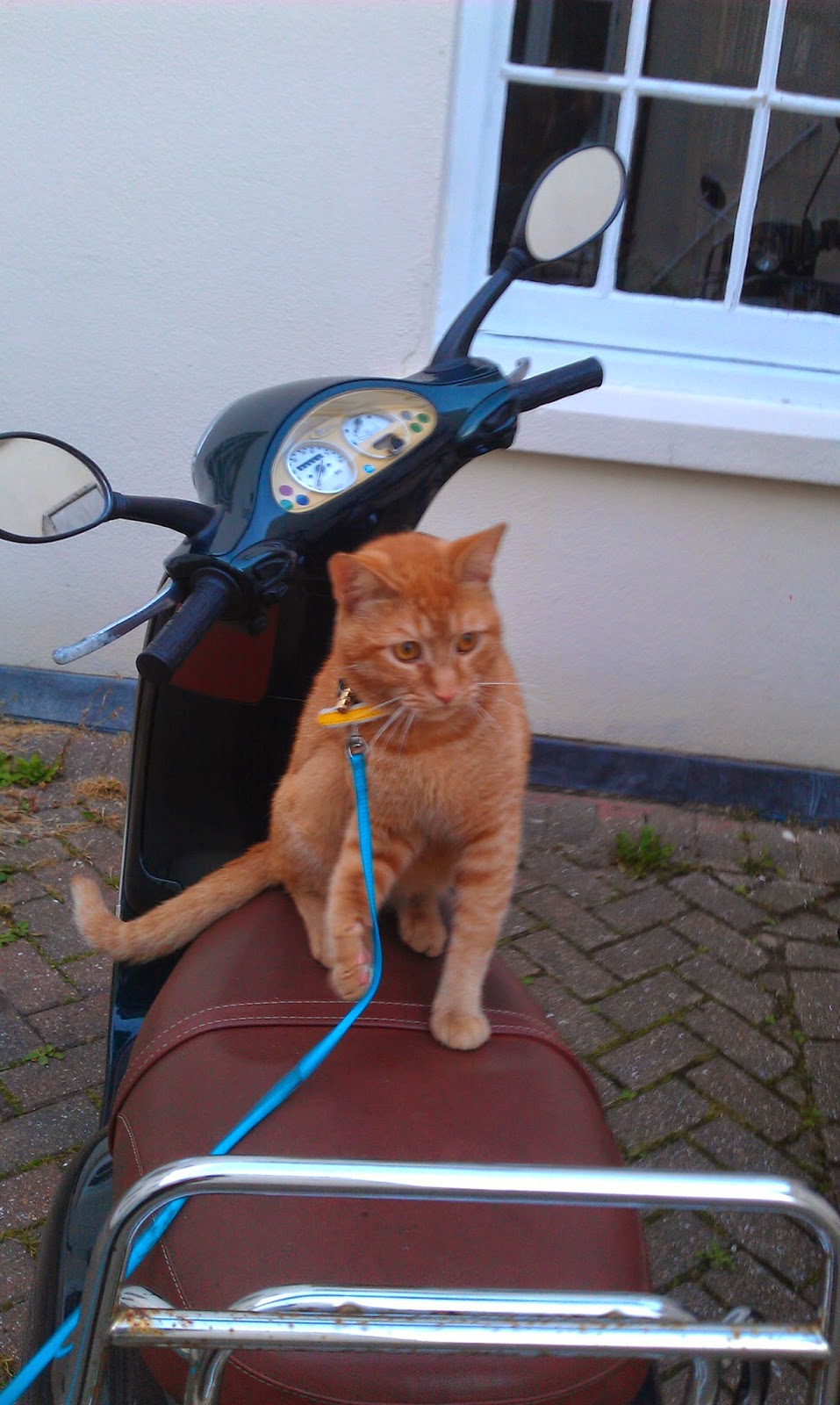 Mr Cheeky tries out a neighbour's scooter for size... 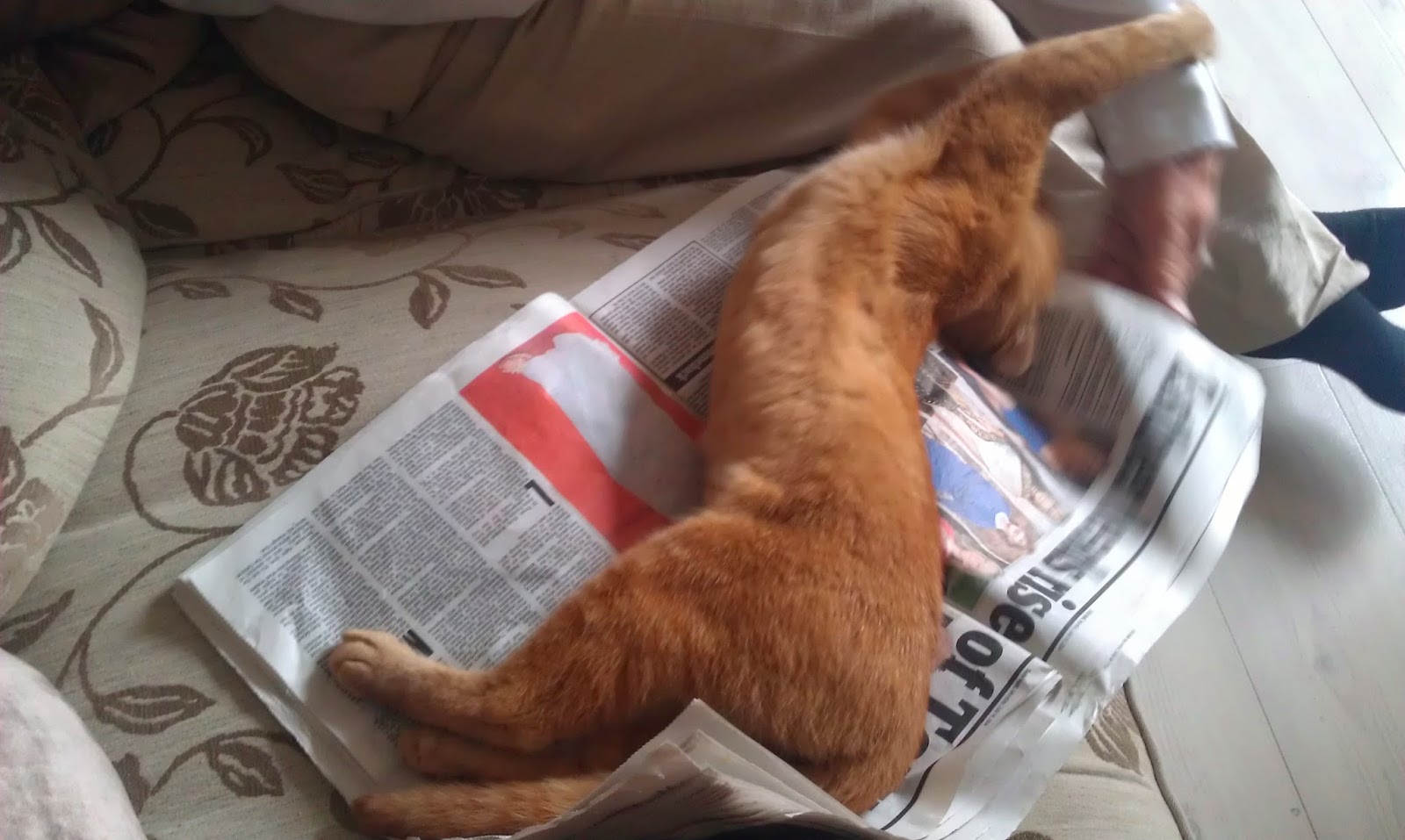 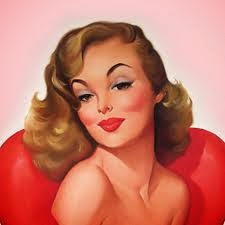 In the (unisex) hairdressers the other day I decided to leaf through a cheesy men's magazine for a change. Among the usual motorbike and celebrity features was an interesting interview with 'diva's' - high maintenance young women who gleefully admitted driving their boyfriends crazy by taking half the night to get ready when going out, constantly changing their minds about things and ultimately demanding everything their own way and on their own terms or they would stomp and sulk until he gave in.

Some even admitted to being deliberately emotionally abusive by faking anger outbursts to frighten their partner and then sweetening him up by being nice to him or granting him favours in bed so he eventually assumed there was something wrong with HIM. Some didn't even stop at that, they physically threatened or slapped him, even over minor misdemeanours.

It was, essentially, a control thing, though one used PMT as an excuse.

They seemed to think that their over-processed looks and enhanced breasts commanded such entitlement and he should be grateful that he was with them.

'Girl power' to them clearly meant it was all about them. They seemed to have no concept of there being two people in the relationship and equality didn't come into it - they looked down on their men and criticised and belittled them on a regular basis which they saw as 'keeping him on his toes' and found highly amusing between themselves.

I was amazed by their candour, and how they thought they would ever keep a man with this attitude, but then I remembered how every pink and girly shop encourages girls to be 'divas' these days with Little Princess t-shirts available from baby grow size up, the cultural celebration of the 'Jewish Princess' and TV programme Bridezillas, to name a few. Perhaps the greatest influence has been the rise of a celebrity culture encouraging every young girl to think she can be a celebrity and 'high maintenance' is how their heroines behave. Be selfish. Take selfies. Celebrate yourself, 'cos you're worth it and get everyone else running around after you and treading on eggshells around you.

I recalled a trio of twentysomething former colleagues who each pined for a man, and then when they found one, quickly found fault with him, giving him nought but a hard time with their demands and insecurities until eventually they had driven him away, a factor which never seemed to cross their minds as they sifted through and analysed every word and gesture of his throughout the relationship for signs of a clue that he was going to be such a b***ard, in their post-work pub support group. Then there was the married colleague who insisted on taking her husband's entire salary for the family pot and leaving him with only £5 a week 'pocket money'. When she rang him on the phone as she did several times a day she sounded like she was instructing a servant, not her husband, to do this, do that and do the other, since he was on nightshift and could therefore do his share of the housework during the day. Admittedly she was a very good housekeeper and bargain spotter, but I still wondered how long he was going to put up with that situation before he called time on his emasculation, particularly since she never mentioned a gambling or alcohol problem on his part to justify such an iron fist on the family purse strings. She also didn't like his friends or let him see them more than once a year at Christmas, regarding them as 'a bad influence' as if he were some wayward teenager, rather than a 43 year old man with a mind of his own.

How many 'diva' women would see such behaviour as acceptable if applied in reverse though? I mean, wasn't that the whole point of feminism? To bring about equal power and opportunity in relationships where there was once a great imbalance generally (although that obviously sadly remains the case for some).

Now I note a new term has been coined for it; 'intimate terrorism', made famous by Nigella Lawson's quote regarding her former husband Charles Saatchi and how she believed he treated her during their marriage. It is therefore not a gender-exclusive term (men can be guilty too), but it seems that women are the growing majority according to a recent study from the University of Cumbria, who will employ verbal and physical aggression including shoving, hitting, threats and ultimatums and spying on their man with mobile phone or vehicle trackers.

But ultimately whichever gender is terrorising or attempting to control the other, that does not a happy relationship make.

I would go as far as to say that any relationship where there is a lack of mutual respect is almost certainly doomed, as without this essential element there can be no genuine friendship, trust and empathy, let alone equality and love.
Posted by The Poet Laura-eate at 11:42 pm 2 comments: