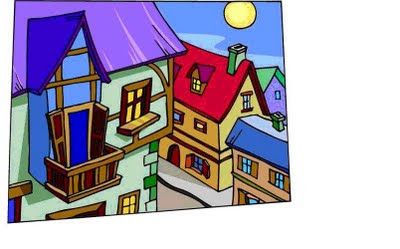 This is the sort of town I would like to live in. 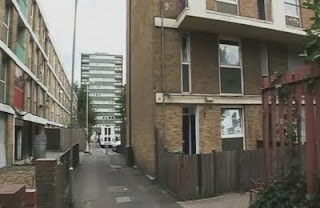 
Sometimes I wonder if housing is built by people for people at all. Or if people can only dream of being listened to when it comes to their own housing.

I guess it's called 'progress'

Let's stand in the way everyone. Let's say a big fat 'No!' to Brutalism. And battery cage homes for humans, with anything but the space and light we all claim to want, let alone room to get our furniture in. Let's demand that all 'progress' be in a forwardly direction, and preferably with posterity attached to help our era mean something.
Posted by The Poet Laura-eate at 4:35 pm 11 comments:

Slow Down Unless You're A Banker (in which case honk!) 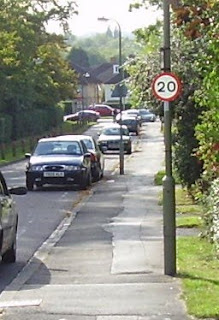 Last week saw the start of a new half-cocked (undemocratically elected) scheme to grind Oxford's traffic to a fume-farting halt by imposing a 20 mph speed limit on various sections of the city centre and residential streets.
Now narrow residential streets with cars parked on both sides with their multitude of hazards such as possible small boys running across the road in-between parked cars I understand, but MAIN roads which already have a plethora of crossings, traffic islands, lights and speed cameras to slow the motorist down? Where is the logic in reducing these to 20?
It feels as if we sensible drivers (and whatever my green sympathies, I am required to drive around the city quite a lot as part of my new job) are being penalised for the drink and drug-addled minority who commit the moronic acts such as cutting up or overtaking on a 30mph stretch and swinging out of corners at high speed minus signals - offences they continue to commit if not more so under the new more-restrictive regime, surprise surprise. Now if the REAL dangerous drivers such as these, not forgetting the latest breed who TWEET about how clever and badass they are to post to Twitter whilst driving faced stiffer penalties such as losing their licence for 10 years if caught, rather than a slap on the wrist, a life ban if they killed or mained anyone, THAT would be be more sensible and effective than this ridiculous money squandering scheme where it is 30 miles an hour one minute and 20 the next with no particular rhyme or reason attached to which section of road is which, bar the obvious side streets. And don't get me started on dangerous cyclists or lemming pedestrians who seem to rate listening to their iPods above looking before they pull out or cross! Don't they deserve a penalty or two? Or doesn't the Highway Code apply to them?
Cars are not going to go away after all. Though perhaps they might be drastically reduced at least if truly radical schemes such as the reintroduction of trams or the provision of continuous cycle lanes were considered, so what is the point of deliberately creating obstacles for cars, thereby promoting the mass pollution of idling engines? 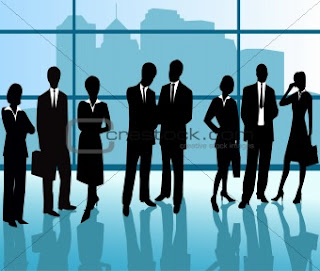 Meanwhile on Radio 4's Today programme this week, a city finance chief was challenged about the fact that huge bonuses continue to be paid to bankers, despite the recession, and performance regardless - even in the cases where banks have been bailed out by the government via our taxpayer's money to stay afloat.

His reply was that they had to continue to pay large bonuses as our banking talent would otherwise be lost abroad.

What a brilliant strategical tactic, I thought! Kill the bonuses so they go abroad and destabilise somone else's economy with foolish risk taking whilst our own country has a chance to recover and fight back.

And do they leave us any alternative when no financial institution will seemingly hear of bonuses being performance-related, or at the very least, paid after tax, and after profit margins have been factored in? It now even emerges that a handful of cheeky bankers are suing for not receiving the obscene bonuses they expected.
Posted by The Poet Laura-eate at 10:02 pm 10 comments:

Fourteen days from larvae to caterpillar
Then I ate and I ate 'til I was a fatterpillar
I ate and I ate 'til I began to pupate
Becoming a butterfly would be worth the wait
Not to mention save a fortune in fur and Jimmy Choos
I was ready for my time in the sun, ready to hit the news
But first, I was trapped in a chrysalis!
Waiting for my supermodel miracle catalyst
Suppose my shell refused to shed
Suppose a sparrow ate me for a mcsnack instead
Or I became a mutant ninja caterpillar with a caterpillar track
How could I take the cat(erpillar) walk by storm with that?
Luckily I emerged and my wings unfurled to reveal…a Red Admirable
The Royalty of the flutterby world
So it's rose petal red carpets all the way
Heading the butterfly parade at the break of each day
The sweetest nectar, the most potent pollen
I almost binged 'til I was swollen
Before remembering I was the supermodel of stick-insect kind
And snorting sherbet instead.

This was my contribution to an open air reading with Back Room Poets in Oxford's Botanic Gardens today on the theme of The Hungry Caterpillar. As you can see I am a poet in crysalis. Who knows what I will hatch into. If only I hadn't ate all that cake instead of boring leaves...