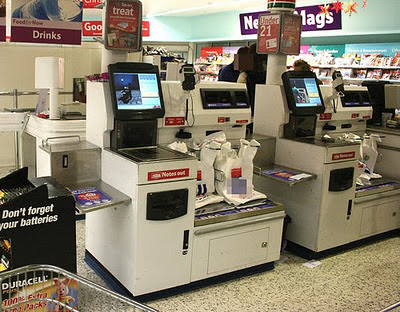 Yesterday I popped into my local WH Smith to see if the latest edition of my favourite magazine had come out.
Lo and behold three quarters of the shop assistants had been replaced by machines since my last visit a couple of weeks ago.
A girl was directing the customers to them.
'If you've only got a few items there's a till free over there.' she repeated breezily at regular intervals.
When it was my turn I replied;
'No thanks. I don't agree with putting people out of work.'
'Oh well, they're here now.' she said, indicating the machines with a wave of her hand no less breezily, as if that were an end to the matter.
'I can still take a moral stance' I replied, waiting for one of the two human shop assistants left to become free. She carried on directing customers to the automatons, though I noted with satisfaction that the three customers immediately behind me also refused to be herded towards dehumanisation. Had they overheard my exchange with the girl, or was it natural repugnance that they no longer warranted a 'Hello, how are you today?
Even more shockingly it seems that Central Library in Oxford has dispensed with almost all its staff in favour of check in and check out machines as part of a radical recent makeover (despite Oxfordshire County Council's pleas of poverty regarding even keeping all its libraries open, let alone finding money for expensive makeovers).
Now you might not expect WH Smith to care that a friendly human greeting might be an elderly customer's only human interaction for the day. They are there to maximise profits after all, but a Library....?
Nor is any payment offered by the commercial concern to the customer for doing all their own checking out and packing, no matter that they have shifted this labour onto the customer and slashed their wages bill, albeit granted investment in the technology will take a while to pay for itself).
And what happens to all the staff who are now surplus to requirements? Where do they go? How do they maintain economically-useful lives without jobs? Is all this redundancy cutting off their former employers' noses to spite their faces? Are not staff also customers who keep the economic lifeblood of this nation pumping round?
On a Radio 4 programme recently I heard a commentator opine that if you give £1 to a working person it will go more or less straight back into the economy. If you give a £1 to a rich person, chances are they will trouser it and find a way of sitting on it for years. On this basis, working people are even more economically vital than wealthy people it would seem. Makes me wonder how many bankers spent their ill-gotten gains in the country in which they obtained them once the world was suddenly their oyster and they could go anywhere and do anything.
A colleague of mine who also enjoyed those heady teen days where you could walk out of one week-end shop job straight into another - if you decided you fancied shoes over greeting cards for example - now despairs of her teen son finding his first shop job as there just isn't anything for him to cut his teeth on to prepare him for adult life and give him the buzz and self-esteem of his first wage packet. He has applied to more than 30 and had only one scant interview with no contact afterwards. The new Asda Living store received over 70 applications for every part-time job it offered. Even adults now struggle to get more than part-time jobs in shops and often have two or three on the go to make ends meet - exhausting and stressful in the extreme - plus they lose out on the perks that their forebears used to enjoy in more secure days, such as Christmas bonuses and promotion to supervisory and managerial roles. The stores in turn lose out on staff continuity and loyalty - which naturally impacts on customer service and satisfaction and the once-happy and secure feel of a store.
No question shops are suffering in the face of internet and out of town shopping, but they do need to sell what people want and be innovative in what they do. Any store which comes up with classic good quality clothing and shoes which actually fit, are comfortable and look good will win my custom, e-bay or not, but so many shops like Next have just lost their way and spend far too much time pandering to the teen market who can no longer obtain shop jobs to finance their purchases than they do catering for older customers who might actually be able to afford what they sell, albeit on an irregular basis in my case.
Automatic tills will not be enough to save them, and are yet another turn-off for customers like me. though I have even heard teenagers opine they don't like them. Quite right too. Why should they harbour any affection for the thief of their start in the world of work, a rite of passage the rest of us once took for granted.
The joy is being extracted out of the shopping experience which used to be a tactile and sentient business - you felt and tried on the clothes, you chatted to the staff. The more dehumanised this element becomes the more terrestrial high street stores lose their advantage over internet shopping.
Is this what any of us want? I don't remember voting for it.
Posted by The Poet Laura-eate at 9:42 pm 13 comments: