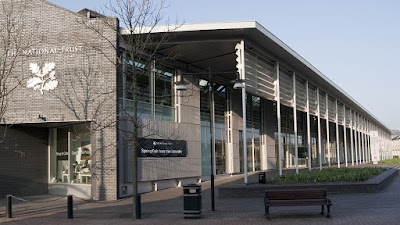 You'd have thought the National Trust would have had enough beautiful buildings in need of rescue to cherry pick and restore the most amazing national headquarters possible, even in the middle of London. Or failing that they could have talked to the Society For The Protection Of Ancient Buildings who maintain a list of At Risk historic buildings For Sale.

Instead they opted to erect the above temple to the worst of flimsy bland modernity in Swindon for £14.5m, representing a rather large V-sign to their many thousands of members. Ok, it has green credentials (if you discount its construction footprint) but how much more inspirational it would have been to show how a historic building could have been 'greened' to a similar degree without compromise to its architectural integrity.

Recently their outgoing (thank goodness) £183,000pa director Dame (how?) Helen Ghosh has dragged NT into the eye of a storm by putting the National Trust, somewhat inexplicably, at the heart of celebrations commemorating the 50th anniversary of the de-criminalisation of homosexuality.

Not content with trying to force NT's many thousands of (mostly retired) volunteer staff and guides whose free labour the charity relies on to proudly wear rainbow badges, thus alienating many scores, some of whom have resigned after more than 20 years of giving their time to the charity, Dame Helen also 'outed' the late owner of Felbrigg Hall, left to the National Trust by lifelong bachelor, Robert Wyndham Ketton-Cremer, something his surviving friends and family insist he would have been horrified by as he was he was 'a very private man' and of an era where most people kept their private lives private. Then there was the ghoulish exhibition of 51 nooses at Kingston Lacey to mark those who were hanged for their proclivities in less enlightened days - moving, no doubt - but hardly relevant to (or the place of) a conservation charity.

Earlier in the year Dame Helen enraged members and staff alike by banning the word 'Easter' from the Great Egg Hunt' events promoted across NT properties and she has previously outraged art lovers by removing many paintings from NT properties (NT hold one of the largest collections of art in the country) to encourage a less middle class demographic to visit, an object significantly reduced admission (or even free days) would be far more likely to achieve. Similarly she has stripped a lot of antique furnishings out for the same reason (let's hope they do an audit of everything she's removed before she leaves - or even better compel her to reinstate it.)

The latest is that NT have stopped asking visitors to rate their 'enjoyment' of visiting a National Trust property as the percentage of positives was plummeting.

My last visit to an NT house was to Prime Minister Disraeli's House Hughendon in High Wycombe about a year ago. I loved the house and garden and found 'Dizzy' a fascinating character, but what impacted on my NT 'experience' is that the moment we admitted to not being NT members, the young spiv in the ticket office proceeded to do a hard sell on my mother and me for ten minutes or so rather than just smile sweetly, hand us a membership leaflet, let us buy the tickets and get on with it. The tea shop was overpriced (as expected) and delivered distinctly underwhelming menu options, my watery hot chocolate at the luxury price of £3.40 being particularly disappointing.  The gift shop had a few nice trinkets, but again overpriced enough to easily resist temptation (particularly for my mother's generation, who now have money late in life but have never developed a habit of spending it on unnecessaries, owing to the privations of  their early life). Note*: It was once a fantasy job of mine to become 'chief buyer' for a major historic attraction, in which case, I would have used the William Morris 'useful and beautiful' criteria as my mantra for selection and known exactly how to hook my mother's generation into buying!

While I appreciate the fact that most large houses have now opened their Below Stairs world as well, what I don't like are too many ropes in the way and not enough artifacts on display. I don't like most dumbing down or Disneyfication of our heritage, though that said, I don't mind the odd wax figure here and there or staff dressing up. In fact I prefer staff dressing up as it adds to the atmosphere. Laid banquet tables are also fine with me.

I like the tea room and WC's to be as beautiful as any other area, preferably with Victorian replica sanitaryware and William Morris wallpaper in the loos and at least appear to be genuinely historic and in sympathy with the property, even if they are modern add-ons. I think well-behaved dogs should be as welcome as well-behaved children. More places to take your dog is definitely a national need. But one of the absolute joys of visiting a historic property, apart from to admire its beauty and absorb its history, is that the admission fee usually guarantees you some peace from overcrowded and raucous public areas where graffiti and anti-social behaviour such as littering or excessive noise, might be on display. If people have to pay admission, they generally respect a space far more.

I also approve of the public events such as the organised fire work displays, concerts, ghost hunts, banquets and other entertainments that many NT properties now host. This is an important revenue stream for them and often forms special and even landmark memories for attendees.

Drag hunting on NT land remains a dilemma if the accusations are founded that it is used as an excuse to 'accidentally' tear apart live animals in the process, but if anti-hunt protesters have solid film evidence that this is happening, then they need to submit this to the Police and the RSPCA.
It is not up to the NT to take action on the basis of online petitions unless this evidence has been submitted to and is confirmed by the relevant channels. If drag hunting were to be banned there is also the matter of all the hounds which would be culled if they were no longer needed, which is a cruelty issue in itself. The NT are meeting to decide the matter on 21st October.

Hopefully with the departure of (Dame) Helen, the NT can focus on getting back on track and back to the mission people join them for - to save the nation's heritage.