Who Will Expose This Evil In Our Midst? 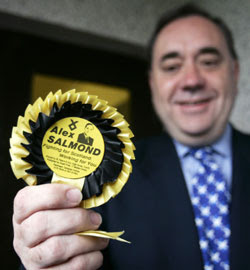 A lot has been said about the facist evils of the BNP, but what about the SNP (Scottish National Party)? It seems to me that with their insidious 'Tartan is Right!' chant and blatant agenda to force every man, woman and child in the UK to become Scottish, this party is getting off any cricitism Scot-free!

Now I'm as liberal as the next person and some of my best friends are Scottish, but I'll be damned if anyone forces me to speak in a funny accent, use funny money and eat fried mars bars. And their plan to convert all British church bells to the bagpipes is outrageous!

And frankly who needs better schools, more caring hospitals and fairer justice in the Courts system, not to mention an end to gazumping in the property market and Rabbie Burns day? Not me.

As for putting a stop to the further climb of the BNP's Nick Griffin. Easy peasy. Aside from the impossibility of taking a man who looks like Humpty Dumpty seriously, one could easily complete the look and ensure he never reaches higher office by swapping his shampoo for hair removing cream (history demonstrates that the electorate seldom votes in the bald guy - even if they actually give a toss about the politics). 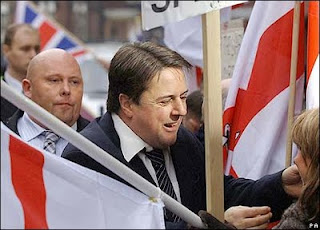 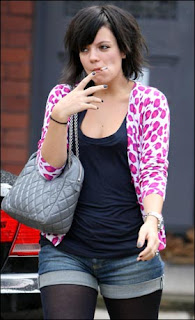 According to Lily Allen's latest hit '22', if a female reaches 29 and hasn't yet found the man of her dreams to define her, 'society says her life is already over'.

You can download this cheerful ditty (full lyrics below) as a ringtone too.

Personally, as a female slightly over 29 who never tried the romantic tactic of piling it high to sell it cheap (aka did the one-night stand thing), but who still never got whisked off to a castle in the air by a straight Prince Charming before her 29-year shelf life elapsed, I'm just off to jump off a cliff...

Ms Allen is 24 years old (only another 5 years to go then. Shame really. Think how much more evolved her lyrics might have had to become as a thirtysomething.)

I know... miaow! But what is life without a little celeb-baiting? Hare coursing is now banned.

She's got an alright job but it's not a career
Wherever she thinks about it, it brings her to tears
Cause all she wants is a boyfriend
She gets one-night stands
She's thinking how did I get here
I'm doing all that I can 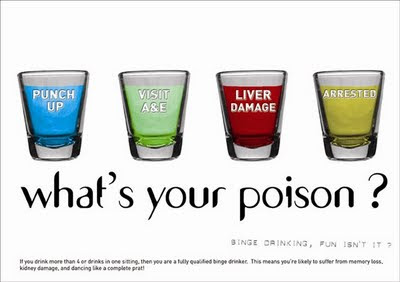 Conscientious driver that I am, twice this week have I been forced to slam on the anchors to avoid mowing down a couple of wheat ears among the latest crop of students who specialise in stepping off the pavement straight in front of moving vehicles without looking - relying on that infallible immortality of theirs - the second without even an iPod glued to its ears as excuse.

Whether or not all the 'Drink Yourself To Death For A Fiver!' leaflets the Freshers are bombarded with by local bars the moment they come up had anything to do with either incident, it struck me that just as more and more youngsters are apparently starting primary school without being toilet-trained or able to speak more than a handful of baby words, an increasing number of students are turning up at University without the ability to even cross the road, much though you learn to expect (in my line of work) many won't be able to make toast without activating the fire alarm or use the washing machine without an engineer being required to mop up the aftermath.

I then mused whether Society is in effect, going backwards, possibly trailing evolution not far behind in its wake.

My thoughts turned to the poor and dare I say, increasingly haggard-looking, parents re-mortgaging their homes in order to afford to send their offspring to University, particularly in a recession, only to risk their investment being run over and all that money wasted for want of a Green Cross Code man.

If this makes me a killjoy, how much less fun if joy ends up on a slab because it isn't capable of assuming even the slightest young adult responsiblity for itself, whether through 'whatever' lackadaisical nature or a negligent lack of parental nuture.

If only history were still taught, more youngsters might realise how hard many of their predecessors once fought to be educated and then to vote and how the powers that be were terrified of the idea of educated voting peasantry and working classes, contriving accordingly to keep them ignorant and therefore controllable for as long as possible.

They would then also know that religion and cheap drink were historically employed as opiates for the masses, where bread and circuses proved insufficient. Now religion has lost it hold, bread and circuses are passe and drink has become even cheaper and available 24/7, to be joined by drug highs for less than the cost of a cappucino. Worse still, acting dumbly and bragging about it has become fashionable, and even aspirational behaviour.

How reassuring it would be to see a 'Wake Up And Smell The Coffee Dudes! Society' at next year's Freshers' Fair.

Meanwhile I might look into whether there is such a thing as a 'student chaser' available to bolt onto the front of the car. Or invent one, if there isn't.
Posted by The Poet Laura-eate at 11:08 pm 10 comments: