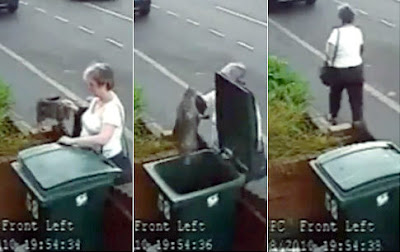 Midway through my sandwich this lunchtime my jaw dropped involuntarily as I read the name of the infamous 'cat woman' of Coventry - the object of the worldwide Facebook hate campaign following CCTV footage of her petting a cat and then callously flinging it by the scruff of the neck into a wheelie bin where it remained imprisoned for 15 terrified hours and might well have starved to death had the owner not heard faint miaows just in time.

Fifteen years ago I worked with Mary Bale at the Royal Bank of Scotland in Coventry. Not surprisingly she was younger then - with long wavy brunette hair and quite a bit slimmer than now, which explains why I didn't immediately recognise her. Quiet but competent and pleasant is how I remember her. It was common knowledge that she had had a raw deal in life. The love of Mary's life - Alan - the slimy area sales manager had unceremoniously dumped her, impregnating another woman and marrying her within months - giving her the life that Mary presumably yearned for and felt should have been hers. Worse still their paths crossed on a regular basis when he visited our branch to berate us on sales figures and give us new unattainable monthly targets 'We're a retail outlet now' was his motivational catchphrase. I lasted 18 months. On bank picnic outings he was also in evidence with NEW woman and baby in tow, which must have been unbearable for Mary. In fact I recall her commenting so on at least one occasion.

Whilst what Mary did was horrific and awful (and I speak as a major cat lover), it also speaks volumes to me of someone who is treating another creature as cruelly as perhaps she herself feels she has been treated. She obviously lives a narrow enclosed life cosseted with her elderly parents (symbolic wheelie bin), presumably with no way out in her eyes until they die, no man on the horizon and she even seems to have given up her choir according to one newspaper article, which as I recall was pretty well her only hobby outside the bank.

Nor is Mary the first former colleague of that branch to go nutty and make the Daily Mail. Receptionist Cheryl ended up in court to be bound over for repeatedly harassing her parish priest with unwanted teddy bears and sexual overtures, despite previous warnings.

Strangely both are middle-aged spinsters who lived with their elderly parents and had had love affairs with bank managers go sour beforehand. In fact Cheryl had even tried to sue the bank when one affair with a married manager went wrong and was off work for many months on more than one occasion with depression.

Unforgiveable as Mary's cruel act was, she can little have imagined it would be caught on CCTV, let alone become world news within days leading to Facebook hate group campaigns and customers clamouring for her to be sacked. She is certainly in the process of paying an extremely high price for her moment of madness, even without the death threats.

Personally I think RBS should suspend her until she has completed a compulsory psychiatric assessment and any court should enforce a treatment order. I may not have known Mary that well, but I know her enough to know that the real Mary used to be kinder than bitterness and disappointment have evidently moulded her and her worst crime until now had probably been lousy taste in men and an inability to move on in life when things didn't work out. She was almost one of life's 'good girls' - ie 'if I'm a good girl, life will reward me' When their lifelong good behaviour does not reap the rewards they feel deep down that it should, it is not unknown for the Mary's of this world to snap.

Then again Coventry was a funny place. People, particularly without partners, tended to go either nutty or turn into alcoholics there. Luckily I got out in time. Just.

Meantime, the power of the internet can also have a funny side 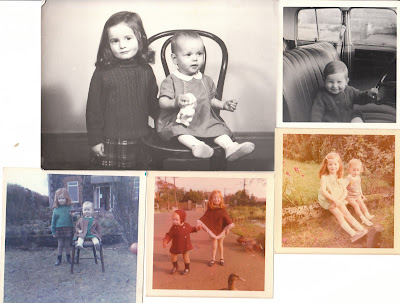 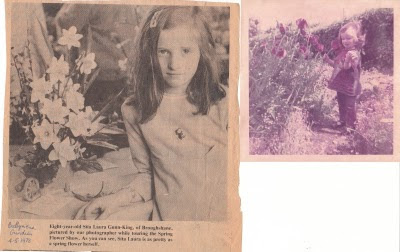 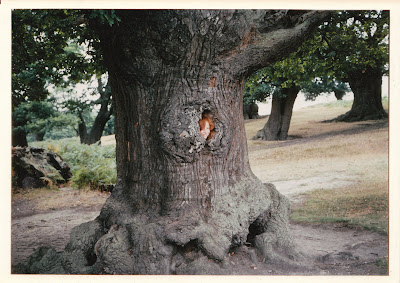 To look at some of my childhood photos, it's easy to assume I'm a good deal older than I am, but the combination of Kodak fade and the family photos being kept in a split mouldy suitcase in a damp shed have taken their toll.
In addition my father always drove old cars hence the pose at the wheel of the 1960s Renault. Unfortunately the photo with famous swimmer Duncan Goodhew posing for a photograph after I'd just won a swimming gala at around age 12 is missing.
The younger child in some of the photos is my sister who seemed to look about age 2 for years as I recall! There are also a lot of photos of us wearing matching knitted and crochet outfits including bobble hats with pom pom ties under the chin which seem to have gone missing, ahem. My grandmother insisted on churning out endless matching knitwear for us for the first 10 years of our lives despite the fact that there were 2 years between us. Then again my mother once bought us matching Noddy Holder style check flares.
The newspaper picture is quite amusing as I have a face like thunder and messy hair yet the photographer, evidently desperate for something to photograph at the boring yearly local flower show, decided to lie I was as pretty as the flowers so he could slip out before the judging. At 16 I did my work experience with the same local newspaper - The Ballymena Guardian, following red-nosed sports 'n' courts reporter Don for a fortnight as he went about reporting on my former schoolmates who were getting jailed for stealing sections of fence and some mysterious activity known as sport.
Posted by The Poet Laura-eate at 10:57 pm 10 comments: 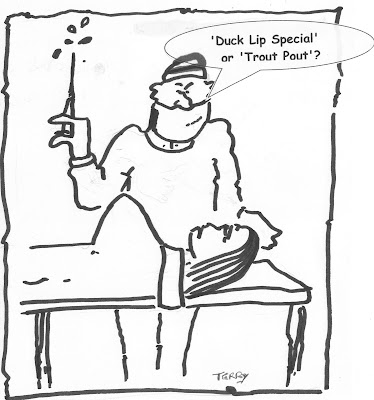 With thanks to my dear friend Terry Sycamore for realising my cartoon idea of the eternal female dilemma! Luckily my lips are probably my best feature so that's one cosmetic procedure I'll never be tempted by. I like to hope I'll never be tempted by any of the others either, but that obviously depends on the number of panic attacks which strike as I grow older commensurate to the level of disposable income I have to do something about them.

A friend recently revealed that he was obssessed with thoughts of death and how long he had left. I told him I didn't give a damn about dying, it was the ageing bit that terrified the life out of me! Wafting around on a cloud and strumming a golden harp away from this rotten world - easy peasy, though it would be kind of fun to swoop down to play the odd trick on my friends and family left behind. And yes, I've got my heart set on angelhood. The long flowing locks, the classy grecian robes, the stunning wings and halo - sold to the girl who's still got a lot of apprenticing to do to earn her wings!

I blame all these people who keep buying me angels ever since I made the mistake of saying that I quite liked them in my early 20s. My house is now a veritable shrine to them (and faeries, many gift buyers seemingly unaware of the difference). Then again I'd had twelve years of dolphins prior to that having stated I liked dolphins when I was about nine. Another friend has a house devoted to pigs and frogs as a result of a similar chance pre-birthday comment.

To get back to the subject of ageing, on the one hand ageism in the workplace is apparently as rife as ever with thousands of highly qualified and experienced 50-somethings on the scrapheap, despite Labour's attempt at anti-ageism legislation. Meantime it remains government policy that we younger generation prepare ourselves for having to work well past the current retirement age with no sense of irony. Then there's the scientists promising that soon we will all live to 120 - whoopee doo! Well that's one way to get your own back - to claim your pension for 15 years longer than you earned it for! Plus I've committed the cardinal social security faut pas of having no children to support me in old age, albeit conversely earning a big gold star on the environmental front, having children being the most planet-polluting activity one can indulge in.

By the way, has anyone else noticed how David Cameron seems to be turning into Piers Morgan? Or do they just share the same Botox practitioner? 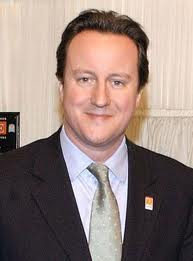 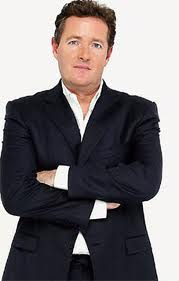