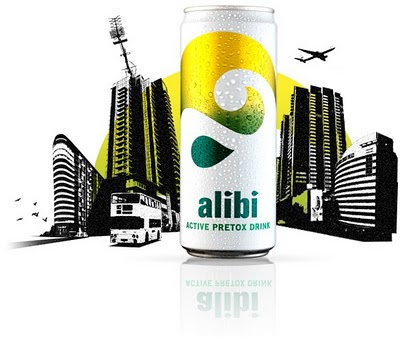 My jaw nearly dropped to the floor upon finding THIS in a health food cafe!!!

In just what way is a product endorsing people to 'tox up' after its consumption and actually implying by its very existence that it will save its consumer from harm either responsible OR a health food? (I wouldn't care to be their insurance company either when the legal suits start rolling in from numerous hospital beds.)

And who can afford to pre-tox, tox and then de-tox? If I had that kind of spare cash I'd sooner splash out on a new sound system for the car.

I know there'll be lots of people toxing up tonight, it being New Year's Eve and all that, but let's not lose sight of our cynicism here. Lest such cynical operators seek to take advantage of us by out-cynicising us.

No more a case for the Trading Standards Authority than Alibi, surely?

My secret ingredient...? Now that would be telling!

Happy New Year to you all - in the most genuine sense of the word 'happy'. Who needs substance abuse to be happy (aside from lots of cake, obviously)?
Posted by The Poet Laura-eate at 10:59 am 13 comments:

The Ghost Of Borders Past 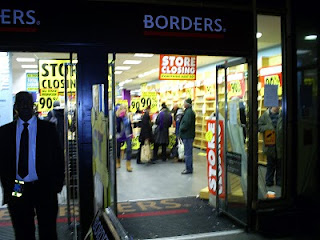 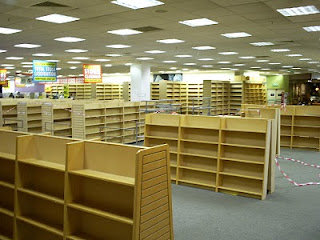 Don't forget folks - only one Christmas day left until shopping days again!
Will you survive?

Only don't expect to find next year's Yoga For Cats calendar in your local Borders store as Borders (UK) is no more.

Innovative calendars were not the only thing Borders brought to these shores. I well remember the time about 10 years ago when my-then boyfriend telephoned to say he'd seen these amazing new bookshops on a business trip to Canada where you could drink a cup of coffee whilst reading the merchandise. 'But what if you bend the covers or spill coffee on them?' I asked incredulously. 'And how do they make a profit if no one buys the books?' My boyfriend did not know the answers but said the bookshops also seemed to host events and be open long after other stores had shut.

You could have knocked me down with a feather when a year or two later the first Borders appeared in Oxford Street, quickly followed by branches in every major city.

When Oxford Borders first opened, it couldn't have been more welcoming. A huge range of bookcases right at the front heaved with novels and books by local authors who were promoted to the hilt with generous reviews from the staff. Author events abounded. All sorts of arty and booky groups were invited to form and host nightly meetings in the shop, plied with complimentary coffee. Myself and Back Room Poets had a monthly open mic in the Sports Section. The coffee shop was staffed by staff who did not seem to know how any of the machines worked but were unfailingly smiley and friendly even if it did take 20 minutes to get a cappuccino. It was great to have somewhere to go in the evenings that was not a pub or a club and while I worried at first about the effect of this newcomer on local bookshops, in actual fact the slant of Borders stock was more Stateside and did not cross over as much as one might imagine with the likes of Blackwells. In addition it also did audio, DVD, stationery, magazines and a coffee shop. Rather than putting other bookshops out of business it encouraged them to raise their game by providing coffee shops and customer loos, hosting events and generally moving with the times. People queued out into the street when Michael Palin came to promote his latest book. The nearby Sheldonian Theatre was hired and filled for a state visit from Jane Fonda!

As time went on however, Borders became a little less friendly and more corporate. A pointless makeover resulted in cheaper and more supermarkety-looking bookshelves, ghastly lighting, a worse events area, where an improved one had been promised, locks on the customer loos, a Starbucks franchise in the once-endearingly inefficient cafe. Various discussion groups began disbanding, a hostile anti-poetry manager put paid to our monthly Open mics, lack of continuity among the shift-worker staff, none of whom seemed to stay long became painfully apparent - rumour had it the staff weren't treated very well. And if you ordered a book you would never ever receive it! All interest in promoting local authors seemed to fall by the wayside, even though their books might be doing well in rival bookshops.

Finally the closing scenes above on Tuesday where everything was discounted by 90% and even the fittings were for sale. An obscenely cheerful woman (the liquidator?) urged customers over the intercom to 'buy as many books as possible so that we can all go home' However biographies of Nicole Kidman and Michael Douglas alongside the dregs of the chic lit section did not appeal, even for 10% of cost price. The security guard stepped forward as if to stop me taking pictures, then shrugged as if to say 'What's the point?' Erotica was the last section to be discounted by 90%.

However for all its shortcomings, such as encouraging a more supermarket-approach to book buying, I shall miss Borders as a hang-out place, even if I was seldom inspired to buy very much for various reasons. It was a good idea which should have worked and did at first, so something went badly awry.

Last Christmas Woolworths and Zavvi, this Christmas Borders - what next to disappear from our High Streets?
Posted by The Poet Laura-eate at 1:01 pm 14 comments:

I like to hope I am not overly gullible. I am quite content for example to accept the latest theory re the premature death of film star Marilyn Monroe as the most probable (ie she was so used to taking sleeping tablets to get to sleep every night that her tolerance built to the point that a. she was taking more than most people and b. they no longer worked so well and she woke up one night, woozily forgetting she'd taken any, and accidentally downed a second lot). Not least as uppers, downers and sleepers were par for the course if you were a film star in the 50s and 60s, and many stars including Elizabeth Taylor have memories of being drugged up to the eyeballs much of the time. However I find that some conspiracy theories really do play on my mind.

When 9/11 happened, like everyone else, I was mesmerised by the horror of the unfolding TV news, and that such an atrocity could happen on such an unprecedented and audacious scale to a giant complex I had once myself visited. It seemed inconceivable. It never occurred to me to question my own eyes. I thought I was jarred by the footage purely because it genuinely was so shocking. Many documentaries and some years later, I have grown dispassionate enough to find myself bothered by how neatly and completely (not to mention speedily) the towers collapsed almost into their own footprint leaving virtually none of the expected twisted floors or major debris. I have watched one or two videos by the detractors and listened to foreign demolition experts whistle in admiration at 'what a neat demolition job' it was in their professional opinions. I won't go into all the mysterious deaths and disappearances which allegedly ensued. I would just suggest that presuming one considers the conspiracists' take for one moment, one can't deny that it was indeed a handy excuse to start a war, despite the human 'collateral' damage, if the theory holds any water. Then there is the mysterious and unexplained matter of how the 9/11 bombers were apparently all from Saudi Arabia yet Bush chose to wreak revenge by invading Iraq/Afghanistan. This in turn is now rapidly becoming Pakistan.

A minute later and I feel guilty for even thinking that any government could orchestrate such an inside job on its own people, but then you never know... World powers are not exactly known for their morality, and if you think back to the mid-20th century, have previously demonstrated themselves capable of almost anything. And on a smaller scale we all know top weapons expert and bio-scientist David Kelly, about to expose Tony Blair as a liar on the WMD justification for invading Iraq, did not accidentally fall on that rusty pen knife in those woods to bleed to death from an unfeasibly small wound to his wrist and virtually no blood surrounding him. That conspiracy we know for sure has legs.

The second conspiracy theory that really bothers me is that the whole global warming thing is a myth - supposedly cooked up by world powers to keep us under the thumb and have us living in fear, since religion and educational ignorance has almost lost its grip in this sense. A handy way also to keep control of world resources and manipulate their prices in addition to curbing the development of third world countries to the point they risk becoming serious threats to Western economies.

Lastly I wonder if I should also be losing sleep over Common Purpose, an organisation which apparently seeks to appoint strategic people all over Britain to 'lead beyond authority' - ie to deliberately dismantle all infrastructure to bring the UK to its knees so it is then fit to be taken over by the new EUSSR. This is said to be behind 'Broken Britain', though personally if true, they may not be doing anything that those fine modern British qualities of substance abuse, moral laxity, laziness and unfettered workplace access to Facebook and e-Bay are not already.

So yes, the conspiracy theorists COULD be a bunch of fruit loops (and many undoubtedly are - sic 'Ripperologists'), but I do think they also raise many valid questions that need to be answered, considering the potentially powerful motives of the equally powerful vested interests who stand to gain as a result of many of these extraordinary world events and crises.

Which isn't to say we shouldn't turn down that central heating and put on an extra jumper. Like it or not, oil remains a finite resource and being anti-waste of our planet's resources is definitely a good and worthy ideal to aspire to, whether or not it turns out we are also destroying the Polar Bear's habitat/our own by indulging. And before the Green thing became as ridiculous and OTT as the Health and Safety thing, I must confess I really wanted to be part of that Koala-cuddling, right-on, knit-your-own-compost-bin, feel-good-about-yourself-while-you-work world and land a good job in it (my vested interests at work!)

Dismissing all major issue and event questioners/detractors as 'conspiracy theorists' or 'climate change deniers' as if on a par with 'holocaust deniers' does strike me as a jolly good means of censorship when it comes down to it. Though a sizeable number admittedly do not help themselves in the credibility stakes!
Posted by The Poet Laura-eate at 12:13 am 20 comments: