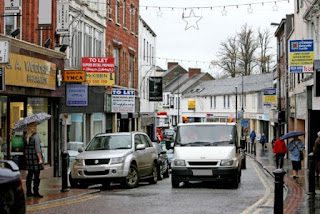 Not so much a poem as a few impressions following my recent visit 'back home' to Northern Ireland...


Pack Up Your Troubles

Wide, sweeping rain-lashed roads of few cars and limits and still fewer speed cameras
Alternate with narrow mud-flicking lanes of interminable bends, hills and dips
Weather passes through many moods in a day
Growing Ulster grass in iridescent green.
Character farmhouses vie with abortion bungalows
For landscape dominance.
Even in designated areas of outstanding natural beauty.
Even on the breathtaking North Antrim coast
Unless boarded up to await the wrecker.
Brave new brutalism straddles traditional towns
Carved up by evermore glistening tarmac roads
To the point they are hardly recognisable as the places I once knew.
These days depressed by out-of-town shopping developments.
Poor Antrim. That county town wears more of a frown when it should be the jewel in its county’s crown.
Lottery-funded vandalism abounds in what lucky heritage is left standing.
Now a giant £8.50 each to the Causeway from a trendy new black hole in the hill.
Yet traditional values remain in the people themselves.
Shirts and suits are still commonplace and women take their sartorial seriously too.
Nuclear family fall-out lags behind that of the mainland
Drug and binge-drinking rates also woefully lacking while belief remains big
No one apologises for themselves.
The Nor’n Irish know who they are.
And their hospitality is second to none.
(just don’t overstay your visitor’s welcome)
Todays ‘troubles’ are more manageable and gone is many a pub I could pass saying ‘So-and-so was shot there by the you-know-who in 1977’
Some people even stay out ‘til after ten now.
Ulster, country of contrasts, province I grew up in, I love and value you but wish you would too, before you’ve sold out entirely to the Emperor’s Clothes of the new.
Tradition is what you do best so capitalise on your USP
(not a new terrorist wing)

It could be Titanic for tourism, but in a good way... 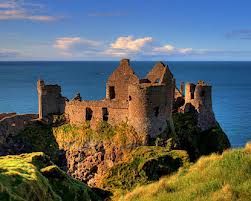