Death of a PM 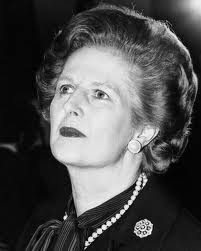 I was most put out that Margaret Thatcher died the other week. As a friend pointed out; 'What are you going to do Laura? She was your only impression!' So, career over, I thought I would pen a poem. Not exactly a tribute but...

'You’ve Never Had It So Good’

The lady wasn’t for turning
Or helping other women off the sticky floor, through the glass ceiling
Thatcherism offered no sisterhood, ran no women’s support groups
Nor did she care for minors
Thatcher, thatcher, milk snatcher
Or miners
Maggie, Maggie, Maggie, out, out, out
Or trade unionists
Never mind strike, get on your bike.
As for your three day week, you’re making Britain weak
Don’t you see those other countries coming up the rear
Tooled up to the nines, shiny new factories in gear
To compete against us while you have another fag break
Foreigners can keep their lights on, bury their dead. Collect their rubbish.
Why can’t we?
Yes, crank out another rust bucket Friday Special at British Leyland
While making out you’re doing a favour for England
But you don’t fool Maggie
Determined to break your stranglehold on the economy
Like some sociopath to socialists.
She sold the working man his council house for a few bob, then closed down his pit job.
Using the Police as her own private security force to protect the scabs
Creating scabs that would never heal
And men ungrateful for longer lives of unclogged lungs
Who didn’t care for shiftlessness.
Then she hit you with the poll tax
And you bit back with a poleaxe
More frightening than the Falklands
And finally the lady was for turning.
She tore the heart out of coal and cars and ships and steel
But offered instead no Roosevelt New Deal
Just the inexorable rise of privatisation and its fees
Until forced to devise Corporate Responsibility
To infer they don’t rob customers without environmental reason
Successive governments changed little of what Thatcher put in place
Except to embrace the EU and open the immigration floodgates
The messing with our NHS and education go on
Until the day can dawn when all tax-funded services are gone.
Those who did well under Thatcher love her
Those whose communities she destroyed loathe her
She divided to rule and she loved opposition
She would never have agreed to a coalition
She would never have fiddled her expenses either
Yes, she had a few qualities as a leader
And her ism will live on long after she’s gone.
But her greatest legacy was surely as a figure of controversy
For love or hate, she provoked debate
With her ‘don’t care got nowhere’ mantra
And sober single-minded agenda
She was the enemy of political apathy
A woman who defied what a woman should be
She made people care about politics like few others did
As she opened a pandora’s box without a resealable lid.

Originally I looked up Margaret Thatcher quotes and intended to cobble a poem together using those, but things went in a completely different direction as they often do in writing. I did find some of the sayings unintentionally amusing though (Mrs Thatcher was known for having very little sense of humour and never getting jokes). Could that be one of the reasons she was so embarrassingly awful in her cameo on  'Yes Minister' which she insisted they write for her...? 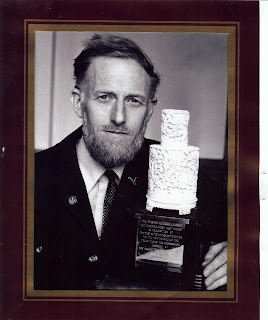 Since I have been so taken up lately with advising all the societies, workplaces and clubs my father was involved with of his recent death, I thought I would share a tribute on this blog. It is of course far from the full story of my father, but his death is naturally about him, not me. And for all his faults as a father and general eccentricities, he was at heart a well-meaning man who achieved much in his life. Something else quite surprising was the realisation of just how many remarkable men I had met in my childhood via my father's involvements - many of whom were friends of his - Richard St Barbe Baker (founder of an international organisation now responsible for the planting of some 23 trillion trees worldwide), Lord Dowding (commander of Bomber Command) Dr Gordon Latto (an eminent Reading physician credited with saving Sir Francis Chichester from cancer prior to his circumnavigation of the world, Gurudev Shree Chitrabhanu (Indian spiritual leader of the Jains, whose handshake was like an electric shock), Professsor Scott Nearing (a pioneer of self-sufficiency long before The Good Life was thought of) and Wilfred Capper (founder of the 560-mile Ulster Way to rival the famous Pennine Way in England). Then there were the videos my father featured in which we watched after the funeral and made him seem like a David Attenborough of architecture and conservation (completely different to how he was at home!) I will end with said tribute...


'It is with sadness I advise of the death of Brian Gunn-King on 18th March 2013 in his eightieth year, following a long neurological illness, bravely borne. Brian became a vegetarian during his teens and devoted the rest of his life to spreading the word about vegetarianism, veganism and the environment.

Brian was primarily involved with the International Vegetarian Union of which he was for many years, Honorary General Secretary, helping to organise several international congresses and working closely with the then-President of the IVU, the late Dr Gordon Latto, winning the Mankar memorial award for services to vegetarianism (see photo) in 1977.

On a local level in his adopted Northern Ireland (he was born in Coventry), Brian and his Iyengar yoga teacher wife Margaret arranged many events and cookery demonstrations via the Vegetarian Society of Ulster of which Brian was for some years the president. Brian also served as the president for the Ulster Society for the Preservation of the Countryside working alongside the late founder Wilfred Capper who, inspired by the foundation of the 250-mile Pennine Way in England, founded his own  560-mile ‘Ulster Way’ in Northern Ireland, saving many areas of outstanding natural beauty across six counties from ruinous development.

In his professional life as a town and country planning chief, Brian also did much to protect and conserve both beautiful architecture and beautiful scenery, successfully advocating responsible landscaping and greater tree-planting in a number of new and rejuvenated areas. One village Brian worked on – Gracehill – won 15 environmental awards as a direct result of his input and Brian featured in a number of books, papers and documentaries on the environment and architecture of Northern Ireland. In addition Brian served as judge for Ulster’s ‘Best Kept Village’ competition for many years.

Brian was a lifelong member of Men of the Trees promoting the planting of millions of trees worldwide in addition to a number of architectural societies. When not campaigning for healthier lifestyles, animal welfare and the saving of heritage and the environment, Brian enjoyed veganic gardening, philately, photography, coin and postcard collecting, rambling, travelling and relaxing with his beloved cats in front of detective dramas.

An avowed atheist, Brian was buried in Northern Ireland following a humanist service, in accordance with his wishes. Regrettably no green cemetery was available in the area, though the family managed to source a handsome willow casket of which Brian would have thoroughly approved. Brian leaves a wife Margaret, and two daughters, Sita-Laura and Venetia.'
Posted by The Poet Laura-eate at 9:51 pm 3 comments: