Born in the Wrong Age - an Oxford Tale 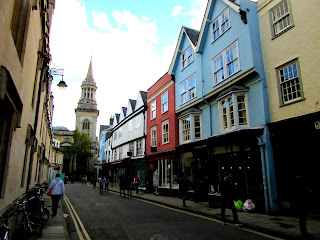 I have an Oxford friend - let's call her Octavia - who although not born in Oxford, looks like the archetypal 'Oxford character' you would expect to find in an OxBridge novel - petite and birdlike with wire framed round glasses, an academic air and an eccentric taste in dress, long skirts, not quite Edwardian but not quite 20th century either, let alone 21st Century - a combination of vintage charity purchases and home sewing of silk and lace remnants.

For someone so 'in place' she has been finding herself feeling increasingly out of place, even born in the wrong age.

Her plays and novels bear this out. Octavia has penned at least half a dozen novels and numerous plays. All meticulously researched and often tackling big themes such as war yet too densely written for a modern audience, let alone pandering to the ever narrowing political correctness of current times. Nor can she boast the exotic background increasingly required for theatre competition entries that rule out a white Croydon-born spinster of a certain age.

Her successes have been modest  - a few short stories accepted by a local publishing collective and a few short plays accepted and performed by amateur groups. Her income remains eked out of parental inheritance.

As a child Octavia was highly praised and repeatedly told she would go far in life with her many talents from writing to painting, sewing, sculpture and antiques.

Now at sixty, she finds herself on the verge of a breakdown that so little has come to pass and the fears of deteriorating eyesight and contracting dementia, like her late mother, have begun to loom large.

Perhaps it has not helped that she has never known the grounding experiences of a regular job or a relationship in life. Mental health has always been fragile, all hopes and dreams pinned on becoming a literary success, much as she acknowledges that this is not an easy task for any writer these days, no matter how talented, such has the publishing world changed.

Indeed with her antidepressants precluding the day starting before lunchtime it would be hard to imagine a suitable day job for Octavia, even if she were prepared to compromise on the writing dream.

Not family (mostly died out), faith nor furry animals seem to be able to offer succor and almost 40 years after graduating from Oxford university the future renewal of her Bodleian library card (a lifeline) hangs in the balance as apparently there is a new regime seeking to crack down on those with no current link to the university.

I can imagine losing this would be the equivalent of signing a death warrant for Octavia as she spends most of her waking hours in this sanctuary, laptop and sandwiches to hand. On the plus side she has managed to avoid falling into the pit of addictions or anything other than prescribed drugs. In fact I've never seen her drink anything beyond herb teas and fruit juice.


Meantime Octavia has reached out to the local mental hospital where she was treated twenty years ago to request more CBT (the only treatment she feels she has ever truly benefited from). Regrettably they will not send anyone round to assess her until she removes her asbestos ceiling tiles (as an OCD sufferer as well, she felt obliged to warn them, even though asbestos only poses a health risk when disturbed).

However as a hoarder of silks, old books, prints and antiques it is hardly possible to enter Octavia's tiny two and a half room flat (bunk bed in the kitchen), so clearing it to remove the ceiling tiles would be an impossibility.

In truth, having such a full flat is more of a risk to Octavia's asthma owing to the mildew and dust collecting in all the unreachable corners. Asbestos is the least of her problems, and does not seem to have affected her in the 22 years she has lived there.

What Octavia could really do with (barring my previous suggestions of a lonely elderly antiques dealer with a big house in need of a late adopted daughter or celibate companion or a hoarding reality TV show) is an Oxford specialist in psychiatry who seeks a challenge - and possibly enough material in one subject to constitute a life's work!

Underneath all the issues, a charming young woman of voracious intelligence is waiting to be rescued, who does brighten under the lamp of human interest, whatever her protestations and self-deprecatory statements.

Posted by The Poet Laura-eate at 9:42 pm No comments: 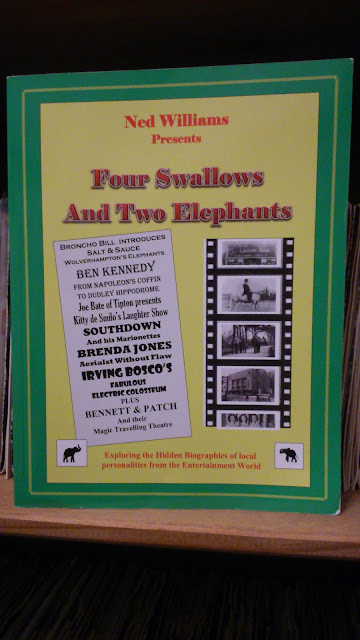 Just over a year ago I spotted a short letter in the Brighton Argus requesting information about an 'Arthur Sellman' who wrote as 'Southdown' in The World's Fair magazine.

The name rang a bell as my mother had had a beloved 'Uncle Arthur' who took her out and about as a child and paid for her to have secretarial classes when she left school at 14 so she could better herself. He had indeed acted as a surrogate father to her, her own father having died when she was three. And he wrote for The World's Fair and was related to the Sellmans of Cannock, a family undertaking firm, whose name continues to this day.

Arthur was not my mother's uncle at all in fact, but her cousin, and he had a grown up daughter - Margaret Doreen - who was a teenager when my mother was born, whom my mother Margaret was named after. I had never known Arthur, who died a few months after I was born, but a couple of fairground models of his remained, and were of great novelty to me as a youngster when I visited Margaret Doreen, though I wasn't allowed to touch them.

I telephoned my mother and Arthurs' granddaughters, Jenny and Susan (retired teachers) and told them of the letter and then emailed the enquirer Ned Williams, a Wolverhampton-based writer who specialises in historic publications, both local and entertainment-related. He replied to say how delighted he was to be put in touch with Arthur's only living relations as had had been researching 'Southdown' and reading his old articles for at least ten years but had gleaned only 'crumbs of information' about him until Jenny had been able to fill in a lot of the gaps. The sisters then assembled lots of photos, letters and other information for him and he visited Jennifer in Crawley to meet her and pore over them.

A year later Ned's book Four Swallows and Two Elephants has just come out with a whole chapter devoted to Arthur Sellman, aka 'Southdown' who turns out to have run a marionette show in addition to his journalism under various pen names for The World's Fair from 1914-1970, latterly settling on 'Southdown' and his eventual regular job as a cinema projectionist at The Regent Cinema in Queen's Street Brighton, one of the city's plushest cinemas. In his final years Arthur penned two short books; 'Bioscope Shows and Their Engines' and 'Travelling Shows and Roundabouts' under yet another pseudonym Arthur Fay.

The family surmises that confronted with a certain future in the family undertaking business in Cannock, young Arthur Sellman ran away to the fairground and so began a lifelong love affair with the world of entertainment as he gravitated around the country, eventually ending up in Brighton.

It is so lovely that Arthur has been rescued from obscurity like this and reading the book one realises what a huge and magical world the world of old fairgrounds was. And how reliant on this form of entertainment people were before cinemas came along, which eventually also seduced Arthur, much as he mourned and memorialised the passing of more traditional forms of entertainment and never lost his passion for them. The old fairgrounds were indeed a vanishing world even when Arthur was young,  Though I for one would still pay good money to see a show called 'Mrs Collins' Lions'! It seems there were a whole genre of gutsy widows of a certain age touring extraordinary-titled shows around the country and the fairground world of the early 20th century was a lot more equal opportunities than one might imagine.

Six other significant figures from the world of people's entertainment in the 20th century are also covered in this book and what fascinating figures they are. 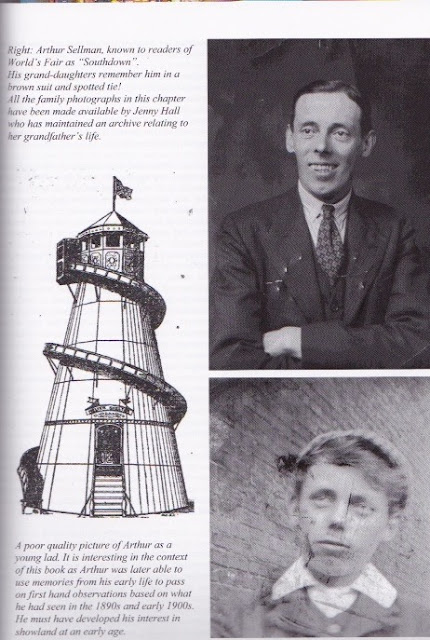