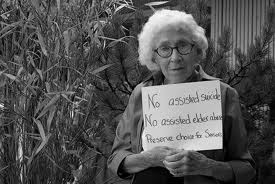 Anyone who considers that Assisted Dying can be legislated for with the subsequent legislation faithfully adhered to without dilution or abuse has only to look to the British Abortion Act of 1967 which stipulated:

‘Abortion is legal when a pregnancy is terminated by a doctor, and where two doctors certify that one of the following conditions is met:

d) substantial risk that if the child were born it would suffer from such physical or mental abnormalities as to be seriously handicapped (no time limit).’

and observe how abortion has subsequently degenerated into a ‘woman’s right to choose’, despite no great change in the Abortion Act, bar the termination time limit moving back and forth as technology advances and more is discovered about foetal viability at each developmental stage, and despite a smorgasbord of contraceptive options available to the modern female which were largely unavailable to the 1960s female.

A former neighbour of mine worked in an abortion clinic where it was not uncommon to have clients walking in for their 4th or 5th abortion. Some were unusually fecund, it is true, and no contraceptive seemed to work for them. Others were so casual about the subject of contraception, they simply shrugged when they found themselves pregnant again and no amount of education or free contraceptives seemed to change that, even though they were not seemingly educationally-challenged. One particularly memorable case involved a high-earning woman who demanded an abortion because being pregnant would interfere with her skiing holiday which would then cause her emotional distress!

So if it is seemingly impossible to get the populace to observe the rules of the Abortion Act and maintain a high level of respect for human life, why would they pay any more heed to an Assisted Dying Act?

While something undoubtedly had to be legalised regarding abortion owing to the estimated 15% of maternal deaths caused by back street abortionists, Assisted Dying is something that many people are requesting through fear of infirmity in one of the most ageist societies in the world and where many still have no access to full palliative care or anyone capable of allaying those fears. These individuals may or may not end up in the physical state of decline they most dread or in the hands of uncaring carers who malnourish them, but increasing numbers are taking no chances and killing themselves or flying to Switzerland whilst still in good health. Is this to be encouraged?

These are the issues that need to be addressed first before we even think of making Assisted Dying legal. Moreover doctors are not trained to kill but trained to treat. There is something deeply wrong about asking them to turn into assisted killers, not least if they have sworn the Hippocratic oath; ‘First do no harm.’

And there really aren’t enough Harold Shipmans (thank goodness) to spawn such a perverse twist in the medical profession.

In the real world, doctors unofficially up the morphine/equivalent on a regular basis in a dying patient in the full knowledge that this will probably hasten the end, but the compassionate thing to do is ease the patients’ pain to the best of their ability. However they will seldom act against the wishes of the patient or their families (ie keep them alive at any cost), unless keeping them alive at any cost is the patient’s or familys' wish, particularly in a terminal case.

In many instances, it is plain for all to see, not just doctors, that the patient is fading away literally and losing their interest in the world and the dying is a natural process when someone reaches a certain point in a terminal illness, a natural process of letting go made easier by being as pain-free as possible in calm and caring surroundings.

However if we cannot guarantee the calmness and caringness of the surroundings or the total pain management, I believe that’s where a lot of the fear creeps in, whether rational or irrational. This society also seems to have lost its ability to deal with death and dying per se. Hence palliative and geriatric care units are often under-resourced, compared to children’s or heart departments, where there are higher chances of happier outcomes and greater success rates. Cottage hospitals – ideal for the dying – continue to be closed in their droves with their human contents transferred to vast impersonal general hospital blocks where they are more likely to be ignored or overlooked rather than properly nursed and comforted.

Finally there will never be a shortage of greedy relations out there, not to mention insecure elderly people (sometimes in the same family) who fear they are ‘a burden’, whether or not that is a figment of their imagination. Who will protect the vulnerable patient from having assisted dying foisted upon them or being scared or coerced into it as being ‘for the best’, whether or not they are competent or confident enough to express their own true wishes?

More outrageously we might even begin to hear of the loving grandparent suffering no more than the usual minor ailments of ageing who knows that the only way for their grandchild to afford to go to university would be for the grandparent to die and pass on their inheritance early and because Assisted Suicide has become legally and socially acceptable by then, no one bats an eyelid when they request medical assistance. As for the grandchild, they wouldn’t even have to send a thank you letter for this supreme act of sacrifice! You do get parents and grandparents who will go to extraordinary lengths to ensure their offspring never hear the word ‘No’ these days.

So my message to the government is to hold fire on an Assisted Dying Act until all of the above are fully considered and debated, not to mention the moral and religious angles. For now the law is far better left to judge on a case-by-case basis where a loved one has helped another loved one die, and use their discretion as to whether each case is murder, coercion-in-disguise or a genuine act of compassion in accordance with their late loved one’s wishes
23/02/12 Breaking news: Doctors agree to abort babies of the 'wrong sex'
Posted by The Poet Laura-eate at 6:35 pm 11 comments: