'Yours ever and getting worse...!' 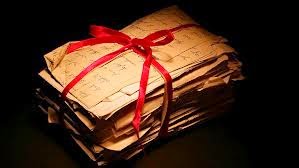 Last week I spent a day going through a lifetime's correspondence as I needed to streamline my possessions following a recent house move (well at least get the lid to fit back on the box!) and was struck by how many letters I used to both write and receive.
Inevitably I found myself re-reading some of them.
Boys whose hearts I broke. Boys who broke my heart. Friends I have lost touch with. Friends and family who have died.

It was very poignant and at times I hardly recognised the 'Laura King' to whom they were all writing.
Curiously I came upon letters and cards from people I could have sworn never put pen to paper when I knew them, including my late ex Don, who had some hilarious sign-offs in true lovable rogue persona such as  'Yours ever and getting worse...!' But for all his bad boy ways, he was solicitor-strict about pagination and dating each page and card and roundly told me off in one missive for not always numbering and dating each page and making sure I had my address at the top (though his changed more frequently than mine). He had also sent me part of a novel he once started which I had duly edited and returned with some constructive comments. Then there were long email exchanges on philosophy and literature (remember the days when we all used to print our emails out as if we didn't trust them to still be sitting in our inbox when we opened it again...?) with a failed mature student I held a brief unrequited level of fondness for, but who fancied my uninterested feminist friend more (even reading 'The Woman's Room' to impress her), so that I found myself in a triangle unrequited romance. Eventually they allowed him no further extensions to turn in a non-rebellious thesis quoting Jonathan Swift at length and he left Oxford to be packed off overseas by his family where degree passes were less rated as a means of attaining a good career as long as you were well spoken. It worked and he is apparently now back in Blighty earning a decent living not compromising too many principles.

The letters from my late English teacher Mrs C were particularly hard to read as she took early retirement and then almost immediately found herself diagnosed with terminal cancer, just as she and her husband were building their dream home to enjoy in retirement. She died two days after her 53rd birthday. She was pretty well the only adult who could command my respect and really make me sit up and take notice growing up, aside from V, the wonderful woman and artist who was like a second mother to me, a large sheaf of whose letters and cards of distinctive 'dear heart' spiky handwriting I also tidied. Thankfully V is still very much around, albeit having had the most horrendous five years recently owing to a personal trauma.

I seemed to have the largest number of letters from my sister's best friend from school, a lovely girl called M who wrote incredibly long and newsy missives immaculately polite in asking just as many questions of and taking just as much interest in her correspondent as talking about herself and her own doings. Then there were witty postcards and notes from another M - a talented young writer I knew through a writer's group in Coventry whom I eventually fell out with when she started dating a guy who turned out to be a drug addict and I couldn't keep my judgmentalism to myself. Having won a place on the prestigious UEA literature course after Warwick Uni, she then worked for a charity and is now a teacher (and mother) up north, I believe.

One or two people I couldn't even place, so they were easy enough to dispose of. As for my ex-fiance, his cards were so obtuse I couldn't even understand most on re-reading them. But since I discerned an unhealthy pattern of complimenting me in one and putting me down in another and he had also rather insultingly put in the box all the cards I had ever given him, they too made themselves an easy decision to dispose of. Thank goodness we never got as far as marrying...
Christmas cards were filtered down to a favoured few and Good Luck leaving cards from various workplaces retained, if only to remind myself of all the names.

But oh, the thrill of all those letters and cards landing on the doormat - evidence that friends and loved ones had gone to real trouble to contact me. How can email, text and social media ever compete with that?
I am now making a concerted effort to use the postal service again - several times a week - before it disappears completely.
Posted by The Poet Laura-eate at 6:05 pm 4 comments: