I am wondering when new PM David Cameron will take the opportunity to make Nick Clegg redundant on 'cost-cutting' grounds (ie that there is no need for two of them to do the same job). Mr Clegg is yet to pass his six months probation or qualify for full employment rights (two years) after all, so he could get away with shafting him without paying him a bean over whatever half day Mr Clegg has had time to accrue.

And while it might not be the most popular move amongst a less predictable electorate, it is better surely than starting another war - the usual means by which a PM or President asserts their masculine iron rod and assures their place in the history books, whilst distracting that same electorate from the fact that they are actually doing bugger all to make their country a better place or honour their election promises. Mr Clegg would do well to take a data recorder to every meeting and refuse to meet him without a 3rd party of his choice in the room methinks.

Secretly I wish their coalition well (I'll be a bit more positive than 'hung parliament') and hope they save cheques and marmalade and all the other residue of being British worth saving before that 74% of the population enact their expressed Mori poll threat to emigrate from the good sinking ship Britannia. Unless of course the percentage concerned is of the calibre we used to send to the Colonies anyway.

But I fear cynicism will get the better of me.

This was supposed to be a nice fluffy post sharing lovely photos with you incidentally, as I realise I've gone a trifle political lately, but I still can't get my new LG cameraphone to recognise my PC after many nights of tinkering/endless software downloading. Needless to say LG are being less than helpful.
Posted by The Poet Laura-eate at 11:30 pm 6 comments:

The charities formerly known as Age Concern and Help the Aged have just amalgamated into a conglomerate known by the meaningless and rather sinister brand name of 'Age UK'.
A quick Google uncovers a rash of recent charity makeovers, all ostensibly executed by the same re-branding agency.

Instead of reassuring terms such as 'Association', 'Campaign', 'Concern', Trust,
'Foundation' or 'Action' next to our major charities, we are now seeing the reductionist;

It can only be a matter of time until Cancer UK and Oxfam UK join them. Is it just me or does this make charities sound more like faceless corporate entities who no longer give a stuff about the public interest, rather than the charitable institutions that they were founded as? Would anyone now feel inclined to leave all their worldly goods to Age UK when it doesn't sound like a charity on their side any longer, or even a charity for that matter? Recent rumour of their strong-arm tactics on 'persuading' the very elderly they are supposed to advocate and protect, to leave them large sums of money using coercive door-to-door bequest 'salesmen' hasn't helped.

And which re-branding agency is receiving all this money for the same one-trick pony concept on each charity?

I mean I've just predicted all the main cancer charities amalgamating into 'Cancer UK', so where is my £2m re-branding consultation fee please? In fact I'll make a similar charge to add 'UK' to the end of any charity yet to be UK'd, slightly less for the smaller charities - I'm not greedy. My website designer friend Dan can come up with a funky logo for each no doubt. And who needs a Focus Group anyway since they seem to ignore the views of their supporters irrespective?

Several years ago it was proposed that the Leonard Cheshire homes and day centres for the disabled should lose the name 'Leonard Cheshire'. Who after all still knew or cared about the mouldly old heroic WWII air ace who once decided that severely war-disabled servicemen need not regard their lives as over, but could still be helped to lead productive and rewarding lives with the right TLC, training and support (a charity which has since expanded to serve disabled people across the board)?

Luckily, enough people still remembered who he was to defend the retention of his name in the charity formed by him and there was sufficient outcry to persuade the re-branders to mollify their efforts to the masterstroke of adding 'disABILITY' to 'Leonard Cheshire'. Will his late (and no less amazing) wife Sue Ryder suffer the same threat in due course?

But every charity benefits from a good story doesn't it? And they don't come much better than the true love and inspiration story of Leonard Cheshire and Sue Ryder.

We certainly need at least a few charities left we can still Trust. 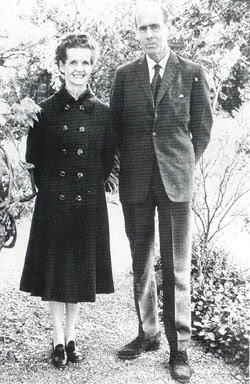 Sue and Leonard
(left more than a park bench)
Posted by The Poet Laura-eate at 9:31 am 12 comments:

We Shall Frighten Them On The Beaches - exclusive election special

Today on Brighton beach, an extraordinary sight beheld me. An elderly lady in a bathchair pushed by two attendants proceeded to knock the Punch and Judy man out with her walking stick and take over his tent for an exclusive election special. I didn't have a camera on me, but managed to record the following on my phone...

Naturally there was pandemonium and at one point parents proceeded to throw small children at her, but the elderly lady continued on until the end, whereby she was re-muzzled and strapped back into her bathchair for the short ride to the adapted Daimler waiting on the promenade.

On a less surreal note, earlier in the weekend I had the great pleasure of meeting fellow blogger Steerforth of The Age of Uncertainty, who was just as lovely in real life as his blog suggested - the sort of first rate human being you might expect to meet when they introduce an Upgrade Friends service for mobile phones (any friends reading this blog excepted of course, being my true friends!)
Posted by The Poet Laura-eate at 8:56 pm 6 comments: