Everyone's a NIMBY when it's THEIR back yard! 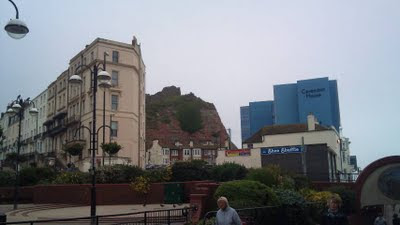 Having ripped out the hearts of our towns and cities with unsympathetic and ill-considered planning, roads and out-of-town shopping developments, often outmoded within a few short years, and often leading to social isolation and social problems in addition to lack of joined-up transport and facility-provision for citizens, the planners of the latter half of the 20th Century and the first part of the 21st Century have amply demonstrated they are not to be trusted with their piecemeal and profit-led ways of deciding what is best for us, let alone making irreversible decisions about the future of this country. Nor is the 'market' to be trusted as any arbiter of taste or 'stakeholder' in and visionary for the long-term.

Planners in conjunction with private developers are now leaning on the government to speed up the planning process, lessen their contributions to local communities in return for being allowed to build in them and water down Green Belt legislation in the questionable name of 'sustainable and affordable housing' and easing the housing 'crisis', hot on the heels of whole swathes of the Victorian north being bulldozed under the misnomer of the 'Pathfinder' Scheme several years ago in favour of unaffordable blocks of characterless apartments. You may recall the famous documentary of several years ago illustrating that a typical Liverpool 1880s terrace (only a street away from John Lennon's childhood home) could be refurbished with all mod-cons for as little as £20k to provide genuinely family-friendly and affordable regeneration WITH the character that 75% of the population profess to love, rather than a small-windowed overpriced human battery-chicken style apartment that they struggle to get their furniture into. All this even without getting the 100% VAT-free perk enjoyed by new-builds but not, for some bizarre reason, restoration projects.

Suffice to say that very few new schemes proposed are genuinely affordable and sustainable, not least considering the carbon footprint required to construct them and the fact that few modern buildings have an anticipated shelf-life of longer than 55 years. However once a piece of land has been built on, it seldom if ever reverts back to greenfield, but is ever after branded 'brownfield', so even though we might feel grateful that few of todays' carbuncles will still be standing 55 years from now, they will most certainly be replaced by other carbuncles.

Aside from the original intention of providing a 'green lung' around each city, town and village following the success of the first 'garden cities' and recognition of the human need to have green spaces, here are the officially-stated aims of green belts, instigated nationwide in 1955, but still as relevant today;

Once an area of land has been defined as green belt, opportunities and benefits include:
Not exactly people-hostile aims, as the developers are trying to infer, I think you will agree.
From a personal perspective I firmly believe that human beings have an innate need to be surrounded by beauty, both architectural and natural. There is a reason you do not observe coach parties of tourists flocking to Luton for example. They are simply not attracted to it. Bar the freak characterful building which has managed to dodge the wrecking ball, it is ugly and even repulsive to them as a tourist or holiday destination. Most people who live in such a town or visit it do so because they have either family or business in the area or because it is a bit cheaper to live there than the town or city they commute to for work from there. If they want to see beauty they visit Bath or Buxton or a University town, or a seaside resort, or maybe a tiny tucked away village which has hardly changed since the advent of electricity.
Just as I want to see the nationwide provision of consistent high-quality palliative care for all, sooner than see 'right to die' legislation passed for those with serious illnesses, I would rather see legislation passed to order all empty homes, derelict buildings and sites be brought back into use before planners are allowed to run amok with their schemes all over our green spaces and special places.
The government might also like to consider imposing sensible immigration measures in line with their European neighbours among other measures to reduce housing pressure such as encouraging the elderly to trade down in property size and more companionship and sharing of living spaces by those of all generations, not to mention high taxes on 'second homes' which could be used to finance such initiatives. Fewer people living alone would also help that other social ill, loneliness, which has been linked to depression and all manner of other mental and physical health issues.
To my mind, this whole issue about the future of building is almost public referendum territory, so many of us does it potentially affect. To which end, please sign the government's Rethink Proposed Planning Reform petition here if you agree.
Meantime...
Glossary:

NIMBY: Not In My Back Yard - a prejudice which MPs and local councilors are quick to accuse ordinary citizens of every time they object to a new development, but which they themselves are the first to turn into the moment there is any new building threat within a mile of their own homes.
SUSTAINABLE - a somewhat meaningless term since ALL new-builds now have to comply with strict regulations re insulation and energy-loss prevention measures, if not quite incorporate a wind turbine on the roof. Moreover, 'sustainable' does not seem to take into account the carbon footprint required to construct the property, utilise that piece of land for the purpose, particularly if formerly greenfield, and the short lifespan of the property anticipated (55 years)
AFFORDABLE - anything more than the 1970s/80s calculation of three and a half times an individual's/couple's salary or swallowing more than 33.5% of their monthly income in household outgoings. In other words the vast majority of housing which is not a caravan or canal boat is decidedly NOT affordable to most and may well be unsustainable, resulting in breadline or debt-laden living and eventual repossession. Though this doesn't bother the banks, as having made a tidy profit out of the first unfortunate home owners, they can simply put the property up for auction and move onto the next.
REGENERATION - Demolition of or stripping out of anything historic or characterful to make way for quick-buck, cram-them-in, neo-Brutalism.
HOUSING CRISIS - the building industry is not making enough money.
On a less cynical note, the 'housing crisis' does not account for a great many properties which exist, but which few people can afford to buy and empty properties for which there is currently no proper legislation in place to bring into use, if only temporarily (some properties in the first category being too expensive for anyone to afford can end up languishing empty for months and even years, as the owners wait for the market to 'pick up').

*The carbuncle featured at the top of this post is even worse than it looks as it actually blocks a spectacular sea and cliff view at the far end of the Hastings sea front - a view which should have enjoyed legal protection from such.*
Posted by The Poet Laura-eate at 8:18 pm 7 comments: