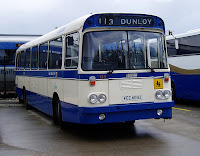 Every afternoon at around 3.45pm, our town bus station became a hub of Protestant/Catholic relations as we all disgorged from our respective school buses to await our destination buses home.
As a rule we tended to separate into our little cliques, the odd elastic band-powered missile or bit of abuse hurled from time to time between brick bus bays.
As a timid first and second year I didn’t tend to stray from my ‘tribe’, no matter that I was just there to make up the numbers as far as they were concerned with my grey, red and white school regalia standing for what was right and good/god.
The moment the 105 to Martinstown swung in, there would always be a mad dash between we Prods and the Catholics to get on first. When the driver finally opened the doors, whichever faction managed to scrabble aboard first commandeered the back of the bus, lording it over the losers, and for the next half an hour the ‘Troubles’ were won.
As time went on, and I often failed in my personal battle to sit anywhere other than in the middle, between the two, I noticed that the ‘Fenian bastards’ were really not as bad as I’d been led to believe and didn’t often tie ones’ long hair to the back of the seat rail either.
Further time elapsed and I found myself slowly gravitating towards them and joining in with the odd Fenian joke or bit of banter.
Naturally I suffered a few sneers for my treachery, but since my ‘tribe’ didn’t exactly like me anyway (what with my being all these things beyond their ken such as English, athiest-familied, vegetarian etc), I wasn’t about to lose too much sleep over them. Or at least, no more than usual.
One day I found myself idly gazing at dreamy-eyed Josephine with her long shiny hair in her St Patrick’s uniform, sitting on the bench seat facing me, as the bus huffed up a particularly large hill, and realisation slowly dawned. She and her friends had glowing cheeks, bright eyes, glossy hair, no braces, no spots, laughed a lot and were markedly nicer than us. I then looked round at my fouler-mouthed Protestant brethren (still crowing at their back-of-the-bus victory that day). Braces, spots, pallid skin, lank hair and NHS glasses abounded.
Suddenly it all clicked into place. Catholics were the chosen ones!
Of course I kept this profound revelation to myself, and from then on found myself proud to consort with ‘Fenian bastards’, ignoring all jeers and catcalls, and even secretly hoping that some desirable Fenian qualities might rub off!
Over the years since I’ve been amused to note my Catholic boyfriends have tended to outweigh any Protestant or CofE considerations, though sadly one or two didn’t turn out to be such great tributes to their creed.
About five years ago I was reunited with one of the few friends I retained from my Protestant school. During the course of my visit I asked K about a mutual friend whom I had also lost touch with after moving to England as a teenager, and was shocked to hear ‘Oh, no one speaks to Angela anymore. She married a Fenian.’ I was genuinely aghast that such prejudice would still exist in 2002 between two factions which were supposedly both Christian. Not to mention now adult! And this from an individual who’d just been out to Africa to help at a mission for the poor, (albeit a Protestant one of course!)
Naturally I didn’t let on to K that I’d been out with at least four Fenians and nearly married one myself!
Posted by The Poet Laura-eate at 5:10 pm

Wow. That's truly shocking but nice to get an insider's viewpoint. You kind of know such things must go on but the devil really is in the detail... you kind of hope that kids would grow out of it... amazing that people can stay brainwashed like that for the rest of their lives. Amazing and scary. What are they telling their own kids?

Wow. Reminds me of my own days at Ballymena Academy, actually. And in Belfast too. I'm glad that you threw off the shackles nice and early and made your own way. Over here in the United States, it would be insane to think that way. Not that they don't have their own issues...

Wow! I remember being completely captivated by "Across the Barricades" as a teenager and have since then always had a fascination for divided cities/countries.

But prejudices and divisions are all over aren't they? When I lived in the depths of Welsh Wales you weren't considered "Welsh" until at least 3 generations had been born in Wales and my Welsh speaking friends told me that their parents would be seriously disappointed in them if they married a non-Welsh speaker. Not quite in the same league I know but it still startled me that it wasn't the characteristics of the individual that was important, just whether they belonged to the relevant group.