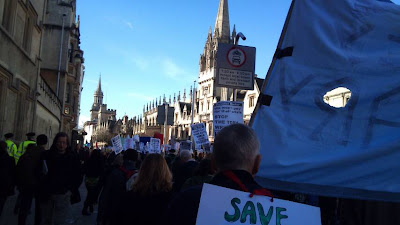 On Saturday I joined several hundred of my fellow Oxford citizens in a march to save our libraries, our youth clubs, our swimming pools, our public toilets and our disabled and elderly services.

Being Oxford, it was more a saunter than a march and a samba band and a jazz band kept the atmosphere light as did the presence of many teenagers, toddlers and 'mutts against the cuts'. Police presence seemed to consist of two on foot with an accompanying Police van, and apart from a bit of traffic stopping, we gave them little to do and certainly no 'kettling' to get their teeth into, though one took lots of photographs of us with a long lens camera when we reached Bonn Square. If anything they should have joined us though, being as 10,000 Police countrywide are also for the chop!

It was highly emotional, if not highly-charged. There is nothing quite like being part of a throng embodying the true sense of community and human solidarity to bring a lump to the throat. Few better examples of humanity at its best.

As we passed by the old Queens College study window of Jeremy Bentham in The High chanting 'They say cut-back, we say fight-back!', I wondered what Mr Bentham would have made of these regressive times - these times which threaten to reverse every civil and democratic advance he ever advocated and so many others subsequently fought and occasionally died for.

My thoughts were interrupted by a young Chinese tourist stopping me to put his arm round my shoulders whilst his friend took a photograph of us sharing my placard bearing the legend 'Don't Let Councillors Cook The Books!'

He disappeared again as I wondered what sort of holiday snap he had intended and what he was going to tell his folks back home about these strange Oxford people trying to save their basic services.

Perhaps they would have a good laugh that we are evidently on the road to becoming a third world country while China's economy is on the up! 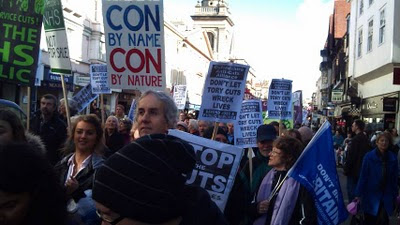 I think Egypt is giving us all a flavour of the power of the people.
I sure hope they paid attention to your protest, Laura!
XO
WWW

I shall toot the car horn in your honour!

Is the goverment's plan to turn is all into a country of uneducated, illiterate morons?

I'm delighted; really delighted to see you stand up and be counted! All we need now is a bit more aggression....!

Steve, take your kids on a march in your area. An essential part of their education, trust me. And it's free entertainment for them too.

Rol, I don't get it either. How's Britain ever going to be a world contender again inhabited by a bunch of ill-educated morons fit for naught but booze and benefits? I'd love to know what the hidden agenda is, because no amount of logic can second guess it.

Notabene, Grrrrrr! Is that ok for starters?

That must have been really cool.