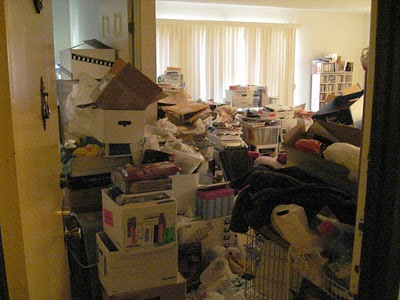 I know exactly how my mother is going to die. One day she is going to be found dead, prey to the suffocating fall of one of her many binbags full of unworn clothes with the tags still on.

My mother is a war baby who grew up with a single doll and about three dresses. She's been making up for it ever since! Unfortunately she has no concept of quality. Any old cut-price or sweat shop chain creation will do, preferably as long as it's her favourite colour, mauve. Nearly everything she possesses hangs badly and she hasn't a tailored item to her name. Nor has she thrown away a single garment since she married my father and whole wardrobes full of 1970s and 80s jumpers in clashing primary colours and geometric designs groan vying for space. My father has about three inches of wardrobe space for his clothes. Luckily for my mother, he'd be quite happy to wear the same three suits for bonfires, holidays and outings until he dies as he hoards other things.

Meantime, what do you buy the woman who has everything for her birthday? Even more clothes she will never wear? Even more jewellery to gather dust or books to be buried under piles of paper (even the ones I feature in and which she professed to want copies of)?

I ended up plumping for a pair of luxury fleece-lined house boot slippers with non-slip soles that she would never buy herself in a million years, but will be sure to wear until they turn to holes - in the garden too no doubt. And a glasses case with her name embossed on it in large mauve lettering (she and my father are forever putting on each others' glasses by mistake), which I also know she will use.

But every birthday and Christmas is a struggle to think of something suitable which won't end up under a mountain of clothes or newspapers (my father's perversion) or shoved at the back of a cupboard.

I am so glad the hoarding has skipped a generation as it drives me nuts every time I visit and causes my parents to be permanently at each others' throats accusing each other of losing things. One more reason to remain child-free methinks.
Posted by The Poet Laura-eate at 8:47 pm

Laura, I have a friend like this and it is terrifying. Her clutter is completely out of control, not an inch of floor space and if anything breaks down it stays that way as repair people couldn't access anything.
Not that I'm saying your parents are this bad but it must be very hard for you to witness such chaos.
Thoughtful lovely gifts, BTW.
XO
WWW

I got about 678 reasons to remain child-free, in case you need a few more. I'm happy to share!

I wonder if this condition is contagious ?

It's definitely a generation thing. My nan was the same and from the same era. After she died and we began sorting through her stuff we were amazed at how much stuff she'd stashed away but never actually used or worn... stuff she'd bought for the thrill of buying it and then keeping it "just in case".

I can't believe I'm coming up with a practical solution, it's very unlike me, but how about buying her something she doesn't have to store or keep - like taking her out for a slap up meal or a day out at a spa or bungee jumping or something?

Sorry, forget I said anything.

Mauve. Mauve. If only it wasn't mauve. I feel your mum should be given a good talking to for her birthday...

Great post - clutter is appalling - I think my neighbour is a chronic hoarder. Heidi has occasionally asked if she can use my recycling bin because otherwise Merlin will fish it out of theirs - I think he is a little crazy!

On the other hand, chucking things out because they have become "obsolete" is equally bad - this relates to clothes or technology. Consider the new iPad, out on Friday. The "old" one released a whole year ago will now be an object of shame to many Apple fetishists...

How on earth did you get that photo of my spare bedroom upstairs? Just to clear my name though, it is a room we have just thrown everything into as we are re-habbing the room across from it. LOL. I have long been struggling with being inbetween a hoarder and a neatfreak. I WANT to be a neatfreak but battle with wanting to purchase things that I think I will LOVE. Then I usually deal with buyer's remorse and have more things to get rid of at yard sales and thrift stores. I am slowly working on this though and am reorganizing and de-cluttering my home and it is making me much happier. I need to keep this in mind when shopping to be sure I really NEED something and that it won't end up just gathering dust. Anyway, it sounds like you put a lot of thought into the gifts for your mom by being sure you got her things she will use. I suppose you can't do better than that because you are not adding to her "hoard." I have started a job caring for senior citizens and have been trying to plan a post on what would be good gifts for them. So this was a timely post for me. :)

www, I fail to see how anyone can be happy living like this. Or healthy, inhaling all those dust spores and germs!

Moi, you might enjoy my latest posting on child-freedom in that case!

Steve, ah the 'just in case' excuse. On that basis, my parents may as well equip the country for the next cold war, except that nothing they hoard is actually 'useful'!

Thanks for the suggestions Rol, but she'd hate all those gifts. Believe it or not, my mother still manages to be fussy in some respects whilst having no discernment at all in others!

Indeed Notabene. What is it with 'mauve'?

Dan, thanks. I suspect you are right about your neighbours. Re the old iPods, keep them long enough and they become collector's items again, do they not? Particularly if you have kept the original packaging and they still work!

Teeni, thanks for dropping by. I aspire to neatfreakdom too and manage it in a 70%/30% ratio most times.

By the by, my mother was delighted with both her gifts and I was right on the money with them apparently.

scary stuff - drowning in piles of mauve clothes and old newspapers I mean.

I'm a strong believer in de-cluttering my home space. I moved (and changed countries) every 6 to 10 years which is great. It gave me a chance to throw away a vast amount of stuff that I never regretted.

You're pretty talented if you managed to find presents that your mother will actually wear and use. That's brilliant. I'm hopeless at thinking of presents for people who have everything.

I hope you don't mind me contacting you, but I read your post and had to get in touch.

I work for Twenty Twenty Television, where we are currently producing a documentary series on compulsive hoarding. Our series will take a therapeutic approach, and aims to help people overcome their cluttering problm.

I don't know what your parents situation is, and whether they are looking for help/change, but it would be fantastic to hear from you for a chat on 02074247720 or rachelharris@twentytwenty.tv