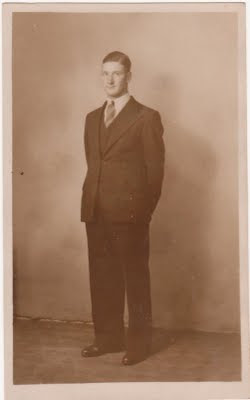 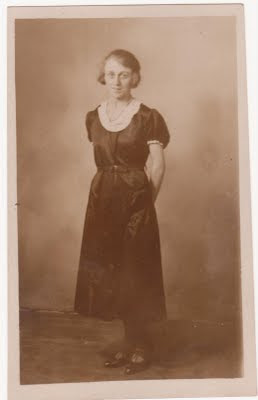 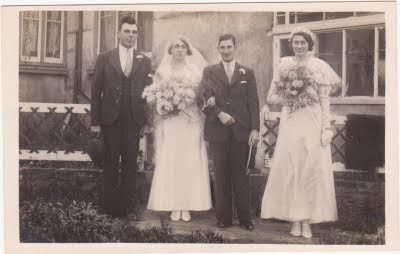 Above are my maternal grandparents, Lucy and Walter. They lived in Brighton in the 1930s. Lucy was a domestic servant, originally from Cannock and so shy that when her wealthy widow employer invited her to go on a cruise with her, Lucy refused and elected to stay behind and mind the seafront mansion instead. Cue for her family to start turning up to use the bath (indoor plumbing still being a great novelty and luxury in those days) with yet other members of the family turning up to ring the bell and pretend to be her employer back early! A gentle, timid soul, Lucy married a cattleman called Walter in her mid-30s (the one who looks like an accountant!) and they had a child, my mother Margaret.

Tragedy struck when Walter contracted an illness, quite likely bovine TB, and died in 1942 when my mother was only 3 years old. Further misfortune was to strike when Lucy developed crippling arthritis at around the same time which restricted her ability to work and made her even shyer about going out and socialising. They eked out a living on her meagre widow's pension with Lucy doing light work whenever she was able and eventually being able to buy the ground floor of the terraced house which she rented. Many years later when the landlord and upstairs incumbant of the house died, she managed to buy the rest at a reduced rate as she had lived there for so long and he had stipulated she should be able to do such in his will. Resistant to all my mother's teen efforts to match Lucy up with a 'dishy' new vicar at the local church, Lucy lived a solitary life with only her good friend and fellow widow Mrs Tennant visiting regularly, and a few family around her, her one indulgence being a new silk blouse once a year.

Aside from little money, Lucy had little clue as to how to raise her daughter as she was not a natural mother and ideas or ambitions for the future were anathema to her. Luckily my mother had an uncle who paid for her to go to secretarial college so she could avoid domestic service and cousins who made sure she got to a few parties and spread her wings a little. Brighton in the 1950s was not as funky as it is now and my mother quickly moved from working in a solicitor's office to work in a travel agents so she could get subsidised travel as she had always dreamed of travelling. Eventually in the mid-60s she made it to India to study yoga for a year, much to Lucy's complete bewilderment!

Lucy lived until I was 11 and I remember her gentle, almost apologetic, sense of humour, her neat petite figure encased in her customary silk blouses and her stoic efforts to enjoy the simple things in life and pin her hair net on each morning despite the constant pain of her arthritis. I particularly remember her cute terraced worker's cottage in the almost-vertically steep Baxter Street with its sunny postage stamp back garden frequented by numerous neighbourhood cats, the unfeasibly large unconverted attic with its pile of 1930s newspapers which I loved poring over and the old-fashioned dolls house I loved playing with. Then there was her amazing teapot which also looked like a little house and the illustrated 1930s Jane Eyre which had belonged to my mother and which I read at the age of 9. She was not a demonstrative grandmother but showed she loved us through little gestures like buying us I-Spy books and sending us £2 cheques and cards for our birthdays. And of course she lived by the sea, which alone made her popular with us!

Looking through the family scrap books on a recent visit to my parents' house, I see she and Walter managed to enjoy a few holidays and day trips before he died. I am glad she managed to know a little happiness in between being a late spinster and a premature widow, not to mention the war and its losses leaving an undoubted lifelong mark, for she did not have an easy life and I was not old enough to think of asking her about it when she was alive, she was just Grandma Patching.

As a footnote to this family background, my mother's 4th birthday present was a graveyard plot to secure the family spaces by her father, paid for in weekly installments to the 'funeral club'. 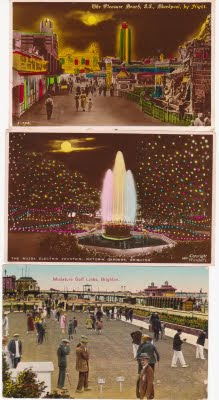 Posted by The Poet Laura-eate at 9:15 pm

Lovely to read...family history is always fascinating. I think they play boules where the miniature golf is in the postcard..

Lovely how you have captured her essence, Laura, without really knowing her. I have deceased aunts who were also 'in service' and fortunately took the time to pry stories out of a couple.
XO
WWW

Have you ever considered posting at Sepia Saturday?

Our grandparents stay with us the longest because they touch us most profoundly in our childhood. I think of mine every day - even now - and am so glad I rescued all the old family photos from my grandparent's house before it was sold.

Nota bene, I will check that out next time I am in Brighton!

Thanks WWW. I just piece together everything I know about my family/the past like a jigsaw puzzle really, but I accept that it may not quite be 101% accurate. I applaud you on your foresight in interviewing yours before it was too late!

Thanks Martin - a great blog. I have linked to it and will consider submitting something in due course.

Steve, I think you may have a point.

The sad thing for my girls is that they really only know my mum, my dad died when my eldest was 6 months old, and my husbands parents live in another country. It is wonderful that you had this time with your Grandma and that you have retained her with you. :-)