Maternity in the 20th Century 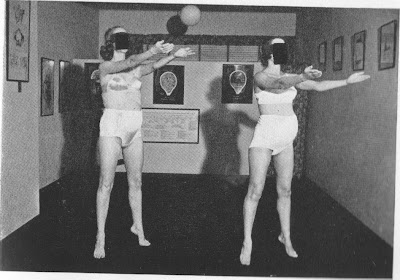 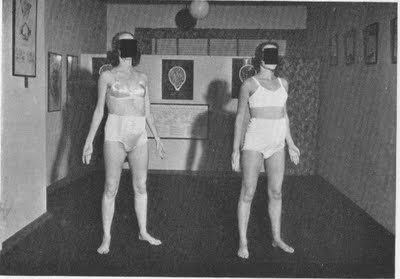 I thought I might share these amusing photos from Grantly Dick-Read's seminal work 'Childbirth Without Fear', first published in 1942. Judging from their eye masks, these women look pretty fearful to me. Conversely, they could be Ninja women! 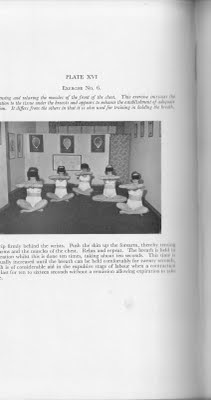 However, slightly disturbing as these trussed up women look, we should not be too quick to judge Mr Dick-Read, who was actually one of the first childbirth experts to presciently speak out against medicalised maternity and the pregnancy production line which so many maternity hospitals would come to resemble in the 60s and 70s, (he himself died in 1959), reminding the rest of his profession as well as women that actually childbirth was a natural process, and with good management, learning and understanding on the parts of all its players, could remain so for the vast majority of women. And although his book was re-printed for 20 years on the trot and he became the first president of the National Childbirth Trust, he weathered a good deal of opposition and career curbing for his unfashionable views. I mean how DARE he suggest that childbirth was natural? Not least in the days prior to the 1948 foundation of the NHS when a terrified woman had to pay a tidy sum for a surgeon's delivery, even if it took installments to do it.

I don't know if my mother had heard of Mr Dick-Read but my mother also bucked the trend and I was born at home, delivered by our district midwife, Nurse Bell, as was my sister two years later during the latter times home birth was almost unheard of and dire threats issued by 'experts' that the mother would die, or at least the child, if more than a few feet away from a scrubbed up surgeon on standby in his fully-equipped operating suite.

To get back to 'Childbirth Without Fear' (never 'pregnancy'), Mr Dick-Read presents a book both ahead of its time, but still struggling with old attitudes and highlighting the many tragic cases of young women who found wonderful men to love, but then rejected them and marriage or even jilted them at the altar because they were so terrified of that inevitable fate, childbirth, swathed as it then was in gleeful gruesome old wives' tales and widespread ignorance. And even many who'd got as far as marriage and their first child would turn their back on romantic love forever if they'd had a bad experience, dooming their spouse to a sexless marriage and letting him think they no longer loved him rather than admitting they just couldn't face the prospect of childbirth again.

Personally I shall always infinitely prefer the odd hour of other people's children to entertaining any thoughts of my own, even with a world of sex education and pain-management at my feet. A rather cynical Facebook friend recently declared children to be the worst sexually transmitted disease you can contract! Which was rather vicious of him, if also amusing.
Posted by The Poet Laura-eate at 10:23 pm

Thanks for posting these hilarious photos - I love the author's name too!

Re: children, for years I was very anti-children and got terribly annoyed if they appeared in adult environments like pubs and restaurants in the evening. To make things worse, children seemed to like me, in the same way that cats and wet dogs always make a beeline for me.

When I was at the children's party last Sunday (the one I mentioned), one little girl nestled up to me and started chatting. To my great shame, my heart sank and all I could think was "Please go away!" But as I remember occasions when adults were kind to me when I was a child, I gritted my teeth and started talking.

"A rather cynical Facebook friend recently declared children to be the worst sexually transmitted disease you can contract..." Ah but they can also be an instant cure for work / life woes and a great help when you need to put things into perspective.

I found myself nodding in agreement with Steerforth...but I wouldn't change it for the world, when we live in a day to day mode (as we do here at the moment) my kids are the most precious things to me and if our house falls down in the middle of the night but the kids are ok then I will indeed consider myself lucky. :-)

There are days when I agree with your facebook friend.

One has to love those enchanting corsets! Wow!
As to your FB friend, yeah, I totally get it.
XO
WWW

So I can't be the only reader turned on by those pictures, right?

May I buck the trend? I very much enjoy the company of (everyone's) children; it's adults who drive me insane. Especially pregnant/lactating adults - I usually find them self-absorbed, self-pitying and self-righteous. I've only ever worked with children, have three and would love more (if my OH liked kids). People assume I'm a bore because I like children (don't say it!) and it seems fashionably intelligent to say they "drain your brain". I say we can learn far more from them than they can from us.

What bloody ridiculous photographs though! Mind you, underwear for the lady who is 'with child' has not improved much.

Steerforth, I'm glad you enjoyed the book and learned to love children in the end, even if they have to be genetically yours! Personally I still prefer dogs and cats if I'm wholly honest! Capable of unconditional love and they don't demand expensive trainers!

Steve and Sagittarian, I'm heartened to hear it. One can definitely be tooo cynical!

Notabene, yours sound a delight, but I can see it's wise to keep them on their toes!

WWW - those corsets are scary!

Yes Lucewoman, adults can be pretty ghastly in their own right. The really astonishing thing is how many completely bonkers adults there are walking around!