Has Cheltenham Literary Festival Sold Out?

For the past twelve years, the highlight of my literary calendar has been either to watch or participate (depending on how brave I'm feeling) in Cheltenham Literary Festival's famous poetry slam. Aside from catching up with and watching the creme de la creme of performance poets in action from around the country once a year, it was wonderful to imbibe the decadent atmosphere of Britain's oldest literary festival (founded 1949) based in Cheltenham's stunning Town Hall. This is the main Hall where the slam used to be held, often attracting a near-full house, almost unparalleled in the poetry world! 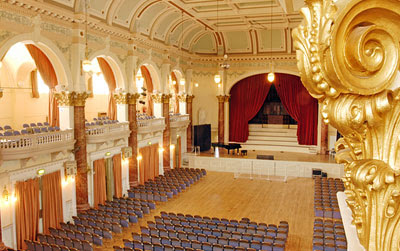 It is now held in a white plastic tent out the back minus the Stroud School of Samba entering the Hall in Hawaiian shirts on stilts at the end to get everyone dancing, in favour of minor politicians gracing the hall pretending to be anything to do with literature.

The enthusiastic, bright-eyed student volunteers who used to flit around in their Festival T-shirts guiding visitors where they needed to go were nowhere to be seen, seemingly replaced by unsmiling besuited bouncer types with ear mics who look like they'd rather be anywhere else manning the doors.

This year I arrived at the foyer anxious to collect my pre-booked tickets only to find the front of the town hall deserted and the ticket booths closed! Queries eventually led me to one tent after another out the back of the town hall until at the 5th one, on another town green nearly a mile away (and staffed by five surly individuals apparently twiddling their thumbs), finally yielded my tickets with the lame excuse they didn't have 'an agreement' to use the Town Hall ticket booth facilities! How on earth did anyone arriving only a few minutes before an event or with a disability manage to get their tickets, I asked? They shrugged.

My companion and I consumed a reasonably edible snack in the town hall cafe under the incongruous white energy saving bulbs, where once the historic room had been bathed in more apt and attractive candlelight effect.

The poetry slam itself, once we'd negotiated hundreds of yards of confusing plastic tentature out the back was sold out as ever, and as an evening was still well worth attending, if lacking some of its former sparkly atmosphere. However the punters were not impressed to be told they could not bring their drinks in, despite the plastic beakers and the bar staff telling them otherwise! One poor man had to glug the £9 worth of beer he had just bought in the bar with the assurance that he could take it in, in less than five minutes before showtime. Yet none of us in the queue was aware of any previous beer incident which should have led to such draconian rules.

In the interval the town hall bar closed altogether just as the throng went to refresh their glasses, with the promise that more bar staff would be put on at the outside drinks tent. They weren't and at least half of the long queue eventually gave up as the (extended) break ran out! Needless to say there was no time to browse the book tent either. To add insult to injury the door heavy demanded to see our tickets again before returning for the second half, leading to major delays when some realised they had left their tickets in the venue or even thrown them in the nearest bin, never dreaming they would be asked to produce them for the second half of a literary event which made little sense if you hadn't seen the first half!

Worse was to follow at the end of the evening when the event finished and at a mere 10.30pm, we found both the outdoor Portacabin loos closed and then turned back to the Town Hall to find that closed as well! Only a near-riot by the audience coming out forced a member of staff to open the back door with the extraordinary excuse that she didn't know there was still an event going on! My companion asked her did she not read their own Festival programme? Then that she should visit Edinburgh Festival to see how a much larger event is properly run!

After all that, the facilities turned out to be filthy on only the second day of the Literary Festival with not even a free Sunday Times newspaper on the splendid marble centrepiece as one left as some minor recompense for a much-marred evening.

Neither of us could believe how shambolic and badly-run the festival was and how badly-treated the punters were, being shooed around like cattle rather than human beings. The programme boasts of 500 events in ten days, which made me wonder if the whole shebang has grown far too big for its boots at the expense of quality. And they certainly don't seem to be courting any repeat business with their idea of customer service. Even locally, I for one attend far fewer events at my local Literary Festival than I used to. I remember the days when I would actually book a few days off work to go to up to half a dozen events until inflated ticket prices and corporatism turned me off.

Apparently authors are beginning to ask for payment as a massaged ego, a few bottles of vino and a couple of dozen book sales no longer cuts it for them when they see festival organisors raking in vast sums of money while they get little or nothing out of the ticket sales.

Quite so. If creeping corporatism has to be endured, then that entails professionalism for the authors and higher (not lower) customer service expectations for the punters too.

One thing's for sure. Long gone are the days when a poet like yours truly could hang out in the same green room as Jools Holland at Cheltenham, and until 1am.
Posted by The Poet Laura-eate at 9:10 pm

Blimey, nothing like making a body feel welcome, is there? Sounds like a case of antisocial networking.

"Poetry slam" seems far to violent a phrase for this kind of event. As thoughtful, intellectual poety types, surely a "poetry gentle nudge" would be more in keeping?

Perhaps one would have been better off at home with a nice mug of hot tea and poetry books to delve into while sitting in a comfortable chair by the fire, with a cat on one's lap... ?

That sounds like a disaster....assume 'professional' organisers have got involved...bring back the good old days!

What a horrible experience - that's certainly knocked the Cheltenham festival off my list (I've never been). Whatever the rising costs etc there's no excuse for such poor organisation. Oooh - I sound really stroppy about it and I wasn't even there! *blushes*

Sounds bad, and what a pity for yourself and your companion - try Frieze Art Fair in Regent's Park for sheer scale! The toilets were immaculate.

That said, you do say you recall it being better. The lighting may have become eco, the interval may have required provision of tickets - which is perfectly normal for any event, neither of which are bad, surely?

Like the Oxford Literary Festival, it seems to have moved to marquees. Perhaps there is a good reason for this, although it is a pity that you have better memories of past years. Still, if the toilets were rank, blame the organisers because there's no excuse for that!

As for authors getting paid for appearing - well, it doesn't seem bad to me that they do. Surely it is the least a writer can expect, with royalties a further bonus?

These events cost a lot to stage, too - they are not "corporate". It's why I seldom go to the Oxford one - tickets to events are expensive at 10-12 quid, although it is superbly organised, and the cost reflects that. A shame it is prohibitive to students, a shame it sells out.

It really is a pity that the hard work of the slam organisers was so badly marred by the buffoons who run the Festival.

Sorry to hear it was such a let down. Boo. And no drinks inside? Don't the organizers know that booze and poetry go together like tacos and salsa? Hope all is well with you otherwise.

Thanks for all your comments folks. I am not against 'progress', just change for change's sake. And rampant corporatism dehumanising what should be both human and special.