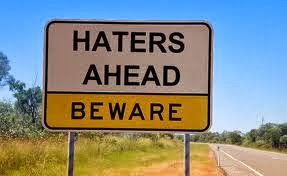 Last Sunday I attended a self-improvement workshop where the first slide the facilitator projected had 'Beware the Haters!' emblazoned across it.
For a moment I was puzzled. Then she explained that whenever an individual seeks to improve, grow or evolve themselves in some way, they will invoke the wrath of the 'haters', even surprisingly, among friends, lovers and families, and to be aware of this.

Apparently some people are so fearful of change or perhaps cannot bear the thought that someone they know might become happier, more fulfilled or more successful in life than they, and even worse, 'leave them behind', that they make it their business to undermine them in various ways from minor digs and put-downs to major show-downs and ultimatums. If the individual under such 'psychic attack' has a shaky or uncertain concept of their own self-worth, these detractors often succeed.

However if one had the courage to fight back, or rather, assert one's right to better oneself, and accept one is likely to lose a 'friend' or two in the process, we would be rewarded in this painful process by making room in our lives for the more positive friends we were about to attract through our new more positive way of being and accompanying vibes. Besides which, if certain individuals in our lives wished to hold us back, even through the fear that we might leave them behind or outgrow them, rather than wishing us well and offering their support, how is that 'friendly'? In what way are they a big loss to us if they are not going to behave in a friend-like manner?

She also made a valid point that if all these people emitting negative energy were to direct that same energy to focus on what they wanted in life, rather than spending all their time resenting others and what they have, dwelling on what they don't want or on what makes them unhappy, and generally letting their fears rule them, they too could take advantage of the same self-improvement benefits open to everyone and enjoy happier and more fulfilling lives.

This reminded me of a book I once read concerning cancer sufferers who had volunteered to try out a special (largely vegetarian) diet designed to boost their immune system without feeding their cancer. A number of volunteers did really well for a few weeks or months, to the point that their consultants were lengthening their prognosis by up to a year and one or two tumours were visibly arrested or shrinking on scans. Then all of a sudden the researchers started to notice that their star volunteers, mainly women, were going downhill again. They made tentative enquiries and found that the women had decided it was too much trouble to cook a special diet for themselves and eat separate food from their families. Even the woman whose family had volunteered to eat the same food as her had eventually capitulated when she realised from a few unguarded comments how much they were missing their normal diet and normal family mealtimes 'just like they used to be'.

Some had even had blatantly disparaging comments made to them by children or spouses, or scorn or doubt expressed about the diet, which had persuaded them to abandon it to win back loved ones' approval..
I found it sad that these sufferers did not receive the support from their loved ones that they should have been able to expect when they needed it most - ie to fight cancer in the way that they wished to and some of them were doing really well with. It struck me they were almost signing their own death warrants in the name of not wanting to be 'too much trouble' and upset the family and its routine. Or at least preparing themselves to leave these same families earlier than expected.

So in a sensitive situation even a mild comment or lack of support from someone who is not a witting 'hater' can cause an individual to abort what could have been a life-changing or prolonging course if they are not prepared to assert themselves in the face of challenge. This includes the natural nay-sayers who might not even realise that that's what they are doing and the effects of their behaviour.

Whilst it is harder to turn one's back on a negative member of the family than a relationship or friend, ultimately one can only win respect through stating one's own truth and doing one's best to be true to it. There are times in life where other peoples' opinions and approval are secondary, if not irrelevant in the bigger picture. And if their opinions are formed by their fears rather than the reality of a situation (ie you have no intention of abandoning them just because you seek to improve your confidence or learn a new skill etc), that is even less reason to pay them too much heed. I certainly think there is room to challenge friends and lovers on whether they are friends or lovers if they are not behaving in a friendly or loving manner. Then there's the risk of 'haters' on the internet for those who share tmi (too much information), so again, Beware the Haters!

It was interesting that so many concerns were voiced in the workshop Q & A about what others might think if a person followed their chosen path. And fair enough; 'You can't just abandon a disabled husband who needs you 24/7' as one woman in the room pointed out. 'Agreed. But you can't walk around labouring under the misapprehension that his life is more important than yours either. Your life is also of value. Equal value.' smiled the tutor. 'And even if it's only baby steps, you can find a way to live for your own sake as well. I suggest starting with ten minutes meditation each day to help you identify who you are and what you want and then, how you can find a way to combine your needs with your husband's, rather than sacrificing your needs for his. You've made a start already. You've managed to attend this workshop. The other thing to remember is that just as you are instructed to put on your own  life jacket first in a plane before helping anyone else on with theirs, you make yourself fitter to care for your husband if you look after yourself first.'

The physical needs of dependents aside, which is altogether a trickier subject since these individuals may be 100% well-meaning and loving otherwise, Quentin Crisp had an interesting maxim on the subject of living one's life to court the approval of others: 'If there were no praise and no blame, who would you be?'

I am still trying to answer that question. Amidst wondering if all the individuals in my world similarly put themselves through apoplexies worrying about what I think of them and constricting their lives to live as blamelessly as possible according to my perceived opinions of them! Answers on a postcard please. Should I worry about what you think of me, and if so, why?
Posted by The Poet Laura-eate at 10:46 pm

Striking out on your own is scarey. Especially for others.

Scary for both I think Marginalia. Perhaps more acknowledgement of this is what's needed.

Following your own path requires strength and courage... because at some point, for at least part of the journey, you have to go it alone.

So easy in theory so challenging in practice, yeah?