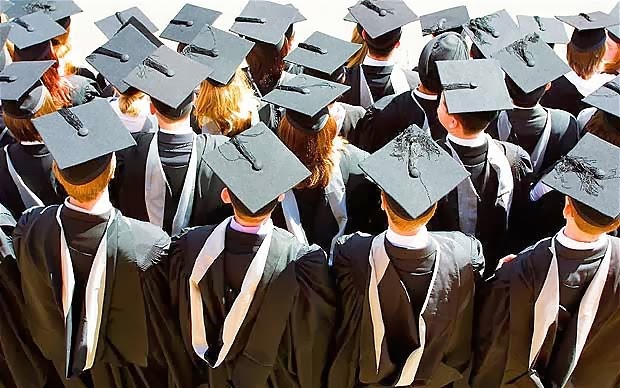 It was fine for academics to engineer university education to suit themselves and their research, writing, lecture tour and sabbatical activities in the past when Universities were free for students to attend and even paid students to attend them via the student grant.
However now that British Universities are not free to attend and fees have recently risen by 200% for the majority of students, and the process of turning students into those demanding creatures known as consumers is well underway, how much longer will students put up with the fact that a three year degree could easily be condensed into two years for most degree courses, thus saving students precious money and resources?
Not least when you consider that with holidays taken out, most British universities are spending no longer than six months of the year engaged in actual teaching/lecturing activities and even then, not equivalent to the timetable demands of a school, unless of the intense nature of a medical degree, which may require placement shift work in addition to conventional tutoring.
Some OxBridge academics in particular teach for as little as 15 hours a month on full-time salary, with the rest of the time devoted to their own academic activities. They are not even required to share the financial fruits of any academic success with their College or University, much though their College may benefit from the kudos of their incumberance.
Would it also surprise people to know that the majority of OxBridge academics are not actually OxBridge graduates themselves? Which isn’t to say they are not generally high-quality academics, but it’s the brand that you are primarily buying into with OxBridge, and the networking towards your future you will be doing whilst there. Elitism? Certainly. But that is the brand being sold here. You want redbrick values?  Choose a redbrick! Don’t choose Oxford and then bleat to the Daily Mail about its inherent social unfairness, though things have opened up somewhat for those lacking in silver spoons at birth over the last 30-40 years.
While the cost of becoming a graduate has gone up, the value of being a graduate has simultaneously gone down, resulting in higher numbers of graduates flipping burgers or emigrating. Ten years ago a typical graduate starting salary was £21k. It is now £14k. If they can get a job. Supply is beginning to exceed demand as the rate for university entry carries on rising though demand for graduates of the less popular subjects such as chemistry is still high.
Meanwhile the international students relied on as cash cows are seeing high-quality universities going up in their own countries offering a cheaper alternative closer to home. There are also internet degrees as well as the more established alternatives such as the Open University. Even home students are noticing they can get an English-speaking university education in the Netherlands for up to two-thirds less cost than in England. Apprenticeships and traineeships are being resurrected with some companies offering new recruits free training to degree level in their field as part of the package, particularly companies such as accountancy firms.
It is time UK universities started waking up and smelling the coffee re the future. The current level of graduates is unsustainable on so many levels, not to mention failing to turn out the right numbers of capable and cultivated individuals in the right areas for the country's benefit, being top-heavy in some subjects and bottom-heavy in others. They also need to decide if they are corporations or educational institutions as the two do not marry well and have completely incompatible agendas. Oxford and Cambridge will doubtless survive, but some will definitely be closing their doors in the coming years if they are not providing the USP of a gold-standard education and have no kudos, quaint pretty buildings or useful social network to offer either.
Posted by The Poet Laura-eate at 1:38 pm

My university, Warwick, has long converted itself to a business and bought into the commerce of industry. As a consequence it's attendance is massive and the campus is huge and ever growing. I swear it has kept the construction industry alive in the Midlands. Is this a good thing? I don't know. I enjoyed my time while I was there and avoided debt by undertaking my degree part time and working full time to "pay as I went". The thought did occur to me though that if I the course was properly condensed into full time (5 days a week) I could have finished it off in 18 months rather than the 10 years it eventually took me.

Yes, it's all about bottom line profits now and the love of learning for learning's sake is considered ante-deluvean.

Daughter was an academic prof and left for those reasons.

In a sense having a market for university places and degrees should be a good thing.

If the student's the consumer paying for their education the incentive should be on them choosing the best course and college.

But the market place is fixed. Colleges can't charge what they think they're worth (except for non EU foreign students), and because the price is more or less fixed there really is little incentive for colleges to be innovative in what they offer or how they teach.

I think we still haven't decided what is the purpose of a university education. Is it to provide engineers, financiers or entrepreneurs or to build a cadre of academics and well rounded generalists.

I'd like to return to the pre-Wilson revolution. Two types of higher education institutions. Universities - unashamedly elite, meritocratic and Polytechnics training highly skilled technocrats to drive forward our industry.

Certainly industry seems to have lost the will or ability to train the workforce it needs to generate growth and profit.

I speak from a safe distance - going to a red brick uni, on a grant, all fees paid and the certainty of a job after three years and a mediocre degree.

Steve, I am glad the university system served you well, though 10 years does seem excessive, even part-time! And you are right, Warwick IS one of the main thriving red-brick universities. Well concrete, at least. It's become quite intimidating to visit now - like some vast industrial park. They must have money to burn too knocking down their perfectly good and funky Arts centre, only to build one almost identical!

WWW. You are quite correct that some academics don't like the way educational institutions are turning into corporations and are leaving for this reason. On the other hand they still get the academic calendar tailored to them, by and large, which is not a luxury they would necessarily enjoy in other areas.

Good points Marginalia. But I think that offering a gold standard in education and tip-top customer service to the students IS a USP as most universities are actually now treating their product (i.e. students) as a product! The students naturally do not like this approach and it will have grave consequences further down the line if they no longer feel affection and loyalty to their former college and make donations and bequests accordingly (traditionally always a large part of any college or university's income. Pretty architecture that is not always constantly being rebuilt is also something that they value so they can show their children and grandchildren where their old rooms were when they come to visit and even have said rooms named after them, sponsoring the room or offering a scholarship in their name. These may be old traditions but they worked. And I have worked in a traditional college and a modern university, so I have seen both sides of the coin. If a student doesn't feel a university gives much of a fig about them as an individual, or perceives themselves to be regarded as a mere number lost in the melee or even worse a 'cash cow' if they are an international student, they will respond in kind and not give much of a fig about their old university. And now the fees have tripled, they naturally want even more for their money, and that will include condensed better value courses.