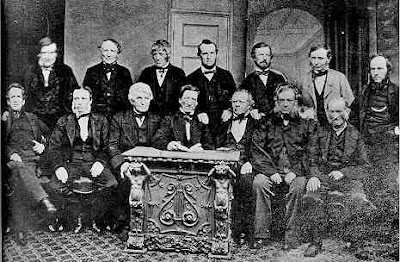 It all began with the Industrial Revolution. Vast swathes of subjects who had lived off the land for generations traded country life in for the attractions of the new cities and towns sprouting up, and more specifically for the less precarious and seasonal living offered by the new factories and mills. However living by the clock, rather than the season, had its own drawbacks. With only half a day off each week for most and crowded living conditions, there was neither time nor land to continue growing their own vegetables and raising their own animals. Some factories took advantage of this by paying their workers in tokens, redeemable only in exchange for provisions purchased in their own onsite 'truck shops' where workers were forced to pay over the odds, often for poor quality goods such as sugar adulterated with sand or flour adulterated with chalk. The fact that many mills and factories also built the housing for their workers enabled them to take advantage of another source of profit from and control over their employees - rent. If a worker became ill or disabled, he or she could then be evicted to make way for an able-bodied worker. Being a skilled weaver or tradesman offered no protection from this exploitation as living conditions were continually driven down for all in the name of profit maximisation.

Against this backdrop, the first trades unions were formed to campaign for basic rights and better conditions for workers and after a few attempts in various areas with mixed results, ten weavers and twenty others scraped together the equivalent of £1 each over the course of four months to form The Rochdale Society of Equitable Pioneers the Co-Operative Society in Rochdale in 1844, the branch that was to become the bedrock of the whole modern Co-Operative Movement. On 21 December 1844, they opened their store with a scant selection of butter, sugar, flour, oatmeal and a few candles. Within three months, they had managed to expand their selection to include tea and tobacco, and they were soon known for providing high quality, unadulterated goods. A decade later, the British co-operative movement had grown to nearly 1,000 co-operatives.

Over the remainder of the 19th century and into the 20th century, the co-op provided more and more provisions and goods until whole Co-Op department stores selling everything under one roof began to spring up and additional services such as banking, insurance, funerals and even adult education evening classes were added for those who wanted to better themselves or had perhaps left school at 12 to go into pits, mills or domestic service and had had little formal education. The Co-Op even ran social activities and had dance halls. The Co-Op were also responsible for one of the first loyalty schemes known as the 'divvy'. Each time a customer shopped at the co-op they would receive divvy stamps which they accumulated into a book until they had enough to buy Christmas treats for the family or saved towards larger purchases such as furniture, though large items were also often available on hire purchase or for rent. Later still, came Co-Op travel and Co-Op development to provide more affordable homes. The people owned the Co-Op and one membership equaled one vote.

The Co-Op first began to suffer when Sainsburys began to expand and Tesco and Waitrose emerged, often selling greater variety of food at competitive prices and then diversifying into fancy goods and offering their own loyalty cards and services.  This process has continued with additional and cheaper supermarkets joining the market with 'metro' mini stores opening on many street corners in addition to hypermarkets and now the rise of online competition. Suddenly the Co-Op seems drab and old-fashioned, Co-Op department stores are closing and the divvy stamp has gone too, though a loyalty card scheme now exists in its place.

Its food often seems pricey for what it is and the food is either very basic and bland such as macaroni cheese or there are a few products in the extra-special range such as chocolate chip cookies or luxury ice cream which are, converersely, superb with little in the mid-range quality stakes. They do however distinguish themselves by being the only supermarket to continue offering cruelty free household products and cosmetics, albeit in limited range, though they are surprisingly quiet about this unique selling point. What there doesn't seem to be is consistency, and many stores Co-Op stores are also slow to replenish empty shelves or serve at the tills when there is a queue, which are essential basics to any supermarket thriving.

However the ethical side and refusal to invest in weapons manufacturers etc kept many of us loyal and for many years the Co-Op provided the first and best ethical online bank, Smile (offering a superb 4% on my current account when I opened it over a decade ago, though this has now eroded to nothing as with the other banks).

Then over the past decade the scandals started to hit after disastrous decisions to try and expand the Co-Op empire with the (failed) acquisition of Summerfield supermarkets, the take-over of Britannia Building Society and the (failed) takeover of part of Lloyds banks. At the helm of the Co-Op bank during the latter mistakes turned out to be an inept banker and drug-addled self-styled methodist minister. Simultaneously a scandal erupted in the Funeralcare side of the business when it was revealed that bodies were unceremoniously stored in vast central warehouses, having to be transported back to the relevant towns and villages as required for cremation and burial, rather than reposing in the local funeral homes prior to the funeral as their loved ones imagined they were and had paid for to be the case, carrying with it, considerable risk of mistaken identity in transit, aside from the indignity of such treatment of the dead.

So instead of pouring its resources into turning its own fortunes around by sorting its own house out first and making the best of its assets and unique selling points, the Co-Op, without any recourse to its members/owners by way of a ballot, or it now transpires, the advice or direction of top industry experts, decided to look outwards to a disastrous programme of expansion and behaved like a corporation instead of a co-operative.

Consequently its members are disgusted, its ethical principals are in tatters (and the Co-Operative organisation had previously received high praise in many quarters including from Kofi Annan) and parts of the business such as the bank are in financial crisis with a 'black hole' of £1.3bn, to the point the bank at least, is unlikely to survive.

The Rochdale Pioneers would be turning in their graves.
Posted by The Poet Laura-eate at 2:41 pm

Such a sad end to a company that had such high and noble ethics.

So tainted by power and greed, thanks for the history of this Laura, I had no idea.

Well it's not quite dead yet Steve, so while there's life, there's hope, fingers crossed. It will take a miracle to save it though.
WWW - yes a lot of us are shocked, though I haven't moved my bank account just yet.