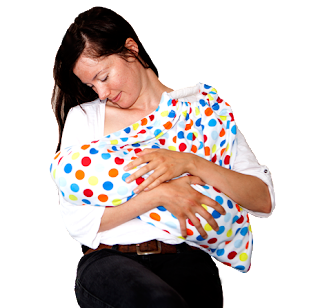 Following the fatuous comments of a BBC Solent Radio DJ last week to the effect that only unattractive mothers felt the need to get their breasts out in public to feed their babies, there has been somewhat something of a media furore on the subject.

Last night I asked my 76-year old mother (an ardent advocate of breastfeeding and fully paid up member of the National Childbirth Trust when we were little in the early 70s and breastfeeding was deeply unfashionable) what she thought.

Now bear in mind that this is a woman who also successfully fought for home birth for us both in an era where this was also deeply unfashionable. Futhermore her best friend in the vegetarian movement, Frances Howard, wrote one of the earliest pamphlets extolling the health virtues of breastfeeding - Breast is Best - of which there were always a stack of copies in our house as my mother used to give them to her Yoga class ladies (she is also a Yoga teacher of some 50 years standing).

To my surprise, my mother replied that she finds the whole concept of breastfeeding in public 'bizarre', and firmly believes that both mothers and babies need quiet and privacy for this activity and why would a mother want Joe Public gawking at her while she did it?

She also worried that the modern trend for 'militant breastfeeding' was turning the public against breastfeeding rather than genuinely promoting it, particularly among shyer and less confident mothers who might choose to bottlefeed rather than risk doing something portrayed as controversial, even though it is actually the most natural means.

I was glad to hear that, for all her staunch views on the subject, she basically agreed with me that breastfeeding should remain a private matter between mother and baby.

In addition why would any mother want to risk some creepy DJ staring at her and judging her attractiveness and presumably whether he'd give her one, despite the kid dangling from her nipple?
Or indeed the breed of man who jokingly remarks 'oi, that baby is stealing my milk!' upon noticing a nursing mother in the local cafe. At least one of my acquaintance admits that this is his first thought.

My mother concluded by saying that the best thing the NCT could do was carry on lobbying for breastfeeding facilities to be provided and maintained in all public places. I asked how she had managed in the early 70s.

'Well I always fed and changed you before we went out, took dummies for you both wherever we went, and if we were going to be out for more than a couple of hours I used a breast pump. In emergencies I would simply ask the shop or our host wherever we were if I could borrow a room for a few minutes. Or go behind a tree or bush. There are always ways.'

Ways of breastfeeding without compromising the human rights, sensibilities and freedoms of others? Why isn't my mother with her full collection of Sheila Kitzinger tomes in the bookcase head of NCT?