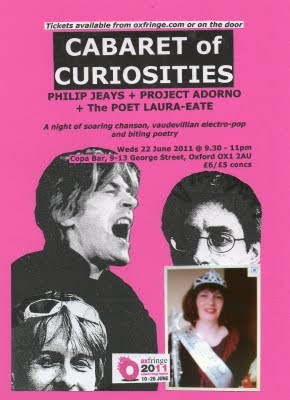 Less than two weeks to go and I'm looking forward to my OxFringe gig with Project Adorno on 22nd (think cross between Raw Sex and Pet Shop Boys with some random philosophers and Dr Who's thrown in) and Philip Jeays, an English singer/songwriter in the chanson tradition. And then there's me, The Poet Laura-eate, with her 'inimitable offbeat take on life' as one reviewer put it.

I have no doubts this triage of talent (or 3-for-1) deal will prove a qualitative experience for our audience, not least in the wake of last year's rave review from the Oxford Times for 'Byron, Get One Free', the poetry show I did with fellow poet Oliver Gozzard.

However promoting gigs has become a hard slog in Oxford, not least as the majority of Oxford pubs and cafes have decided to go all minimalist, removing their friendly community 'What's On' boards, partly a response, no doubt, to the rise of the staple-gun terrorist who plasters every available noticeboard in multiple oversized posters of garish hue and even invades Oxford Colleges to staple them all over the antique oak panelling of each JCR/MCR, given half a chance. 'Bill Posters', that much persecuted figure of the 1970s/80s, it seems, is not prosecuted for irresponsible postering any more. Though a well-policed noticeboard with strict rules about single posters of no larger than A4 size with regular weeding for the out-of-date events is all that is needed. Even the scruffiest pub which made a feature of decorating its walls with What's On posters has gone upmarket to paper their walls with replica 1950s film posters instead, promoting films which have long ceased to require any promotion.

I ended up feeling quite dispirited after my trudge around Oxford with a bagful of posters earlier this week as it seems that anyone without a corporate-sized advertising budget to pay the companies who now own many of the poster and leaflet sites is being squeezed out. Nor do I have a convenient celebrity up my sleeve to make a free media splash with!

However a few gems remain such as Green's Cafe, which still rely on What's On posters for that welcoming Oxford feel. 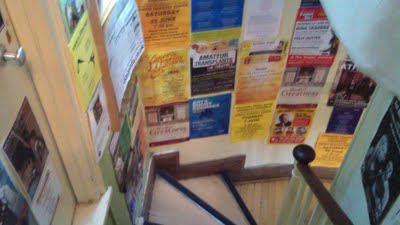 On the electronic front, who looks at their barrage of Facebook invitations any more or notices their weekly e-mails from events listing sites? Needless to say I have spammed all my Facebook and other friends as much as I dare to invite each to either attend or print out a poster for me and put up on their work or public noticeboard as penance if they can't make it. ;- )

Thank you for the spam - at last, spam that is meaningful! And as for Raw Sex. Bless you. I thought maybe it was the only person that remembered them.

I'd love to go, if only Oxford wasn't such a ridiculously long way.

What's Ed Miliband doing hiding out in that poster?

Your post reminds me of my short and forgettable time as Entertainments Officer at King's London Students Union. The Fleur de Lys and Brian Auger and the Trinity (without Jools), my most memorable happenings.

The private jet is laid up unfortunately. Otherwise I would be there with nobs on and buttons down the middle as my people say.
Good luck with it all Laura and may your gods go with you!
XO
WWW

How fabulous, looks like a great night out! Sadly I won't be able to get there (altho' if this shaking keeps up I may well scoot in at the last minute!!)_

A fantastic evening. I too thought of Raw Sex - one half of which died the other day...

I thought your material was superb, and also that Project Adorno were the funniest I have seen them too. Well done!

That's reassuring to know that someone still does Steerforth. Thanks for the thought that counts!

Marginalia, thanks for dropping by - sounds like you had an interesting time as an Entertainments Officer. Actually the Ed Milliband act sounded more like a posh David Bowie!

Bless you WWW - and yes, it went brilliantly thanks. A virtually full house. We could not have asked for better!

I'm guessing you didn't manage to drop in via a hole in the Equator! ; - ). Thanks for the good wishes Sagittarian.

Dan, I am sad to hear that one half of Raw Sex is no more. Thanks for the lavish compliments about the show - am sure the boys (Project Adorno) will be delighted too. What with a virtually full house and everyone on form, we couldn't have asked for anything more. Except perhaps, effective air conditioning!

.I'm sure Praveen will be delighted with the comparison!