Afternoon At The Psychic Fair

I've always been fascinated by saints, angels and all things spiritual or psychic, so naturally I felt compelled to go along to the Mind, Body and Spirit Show at Hove Town Hall last weekend when I saw it was on.

Happily my boyfriend is willing to try most things once, not least where lunch is involved! Having dandered around all the crystal and angel stalls and consumed said lunch, we decided to have a reading with one of the psychics, Ann Sinclair (pictured). Unfortunately she didn't do couples, so since my boyfriend has had such a tough time over the last few years I gave the reading to him in the hope he might derive some comfort from it. 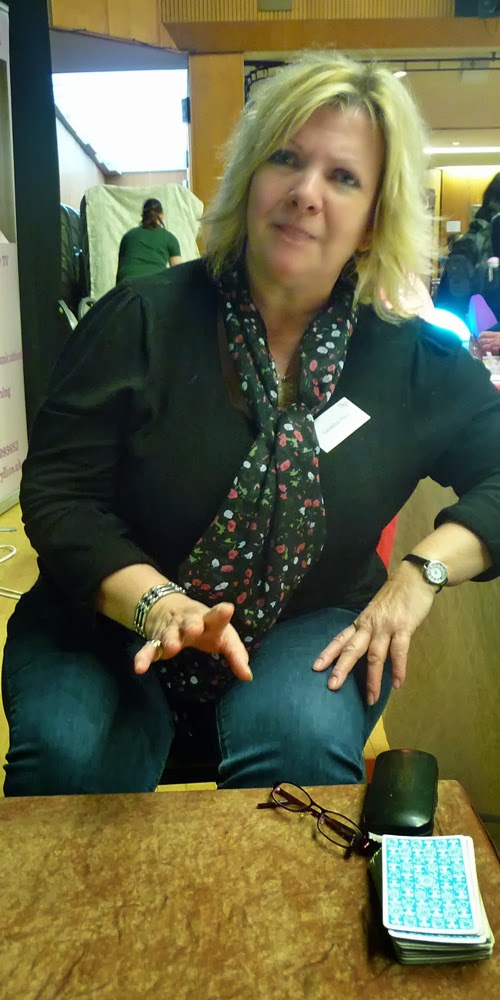 He received advice that a deeply worrying situation at work should be resolved by early summer and also that his estranged daughters had been misinformed about him, even more so than he knew, with one of them more set against him than the other.

Ann went on to say that one daughter would eventually realise that all was not as she had been told and want to see him again and that the other would follow.

He left feeling comforted as he has effectively been denied a voice where his children are concerned and has never been given an opportunity to talk to them.

On their side it is entirely understandable how his daughters would never consider their own mother might be less than honest with them, presumably in a bid to deter them from seeing their father and cause them to believe he was a worse man than he is.

We then bumped into some old friends of my partner's at the fair whom he hadn't seen for ages, so a very pleasant afternoon.
Posted by The Poet Laura-eate at 10:05 pm

With regards such things (psychics and the like) I have moved from being accepting to being an open minded sceptic...

Hove was, of course, the original location for the "Ghostbusters" film. However, the town coven and the Lord High Priest (aka the Mayor), put a spell on Dan Ackroyd and Bill Pullman and so the film moved to the States.

The local paper "The Argus" reported sightings of a 50 ft jammy dodger flattening most of George Street.

There is, of course, a very active psychic river running under Hove Town Hall. The Mind Body and Spirit Show no doubt benefiting hugely from its presence.

Steve, my philosophy is that it's fine to have an open mind as long as it's got a door on it!

Marginalia - I suspect you have yet to experience the inexplicable for yourself. Believe me, that changes everything. But yes, I still have no time for the whale music and the singing bowls and all that nonsense. And many psychics genuinely want to believe they are psychics, but only a few are any good in terms of delivering messages which strike a chord and contain information they couldn't possibly have known by conventional means. (and yes, I have seen Derren Brown and his exposes). I do realise that mediumship is a contentious subject however and respect other people's right to be an atheist about it. As for crystals, it has been scientifically proven that they emit energy. Whether or not that energy is beneficial to human health is the question mark, but plenty of people swear by them.

Dear TPLE, It took me a while to recover from a seance I attended in 1968. Incredibly scary and rather too close for comfort. It didn't help that I was in a not a good place at the time!