What Have The Super Rich Done For Us? 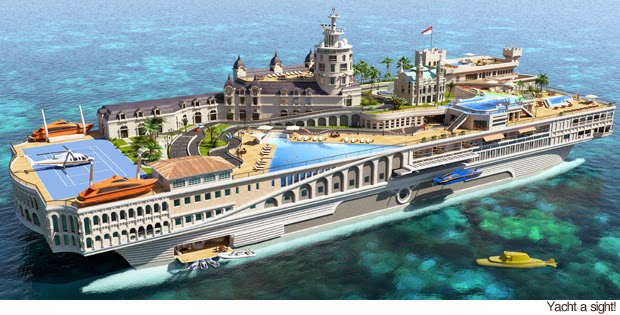 Whilst most documentaries seek to have us envying the super rich, Jacques Peretti's insightful 2-part BBC2 documentary The Super Rich and Us took a different tack by posing the underlying question; What have the super rich done for us?

The whole idea of encouraging super rich non-domiciles to live in UK with the tax exile carrot of zero income tax or capital gains tax on income earned abroad was the 'trickle down' effect - ie their vast wealth was meant to trickle down to the rest of the economy - a promise made repeatedly by successive British governments.

Over 40 years later this unproven economic theory is shattered by Mr Peretti who demonstrates that the reverse - trickle up - has happened. Wealth has increased among the wealthy and stayed very much in the enclave of the super rich, the prime beneficiaries being the luxury product and holiday providers and the servants and assistants needed to service the super-rich (mostly on lowly incomes themselves). The super rich are not to be found supporting the local pub or cafe or shopping in the local village shop. Meanwhile the middle and working classes have seen their incomes and savings plummet and their bills and outgoings skyrocket. Job security too is a thing of the past with part-time jobs, zero hours contracts and microjobbing now commonplace.

Financial inequality has never been worse with some company CEO's earning several hundred times what their average employee does (whereas once it might have been 10 x times max) and at the other end of the scale people resorting to food banks to eat.

Moreover, among the new super-rich, bankers have found devious ways to manipulate and gamble with our savings and pensions and encourage us to live in perpetual debt to the extent that jobs can be devalued without the threat of us striking as we dare not afford to lose our jobs (if we still have them). A whole industry has been spawned to take advantage of the struggling and desperate through rip-off financial products and gambling outlets.

The  current recession (which never existed for the super rich) is far from over for the rest of us. Our very economy is now in mortal danger by the lifeblood being cut off in so many limbs by the top 1% hogging the vast bulk of the wealth and not circulating it as promised.

Ah well, at least super rich wealth boosts UK economic figures as long as no one enquires too closely as to what their wealth is contributing to the economy, aside from a large black hole in our tax system which public services are now paying dearly for in draconian cuts. Furthermore, though this wasn't mentioned in the programmes;  was there any quality control exercised concerning which super rich were lured to our shores to ensure there were no gun runners, drugs barons or Russian gangsters among them? I am not so sure. They let Robert Maxwell in after all.

A startling fact to emerge in the programme is that up to 80% of the flats in every luxury London block being erected are being snapped up by oversea buyers, some of whom will never even set foot in their new pad - it is purely an investment -  the modern equivalent of gold bars in the bank.

Even Henry Ford recognised that you needed to pay your workers enough to afford the cars they produced or the economy would be adversely affected, hence his brainwave, the Model T Ford. Many companies today have forgotten this basic principle and to ask themselves the pertinent question; Who is going to buy these goods or who will afford these 'affordable' houses?

The top 1% however are not without their worries. Protests are gathering apace and the pitchforks are a-coming if things don't change soon as enlightened early Amazon billionaire Nick Hanauer warns. The world has grown up to be aspirational, not to accept serfdom without protest as we might once have done in darker ages.

A particularly refreshing element of this documentary is that it assumed no obvious political stance, proving that you don't need to be a communist or a socialist to believe that there should be decent economic prospects and civilised living conditions available to all. I was indeed myself a proud marcher in last year's March Against Austerity/Britain Deserves a Pay Rise protest featured in the documentary.

Perhaps Peretti's next documentary can explore how in a so-called western democracy, corporations, not to mention the top 1% super rich, now have more say in how the country/world is run than anybody else and more political muscle than our elected governments.

MatchFit Media
Posted by The Poet Laura-eate at 12:25 am

It's not so much the amount if wealth these few possess that worries me but the power that goes with it. Unseating them or making any changes seems an insurmountable task.

Quite so Steve. You've inspired me to add a final paragraph, though I think this subject actually merits its own documentary.

I saw that documentary, I have to say I'm still on the fence about some of the economic/taxation issues they discussed! But this post has certainly contributed to my understanding of it all a bit better. We need to keep an eye on that 1%

I saw the documentary and thought it was spot on...Government policy has been wrong, wrong, wrong. For me it was the simple statement by one of the (enlightened) 1% who said that no much how hard he tried, he would never be able to spend enough to create a trickle down effect. As we all knew, our money that bailed out the villainous banks was used to furnish the lifestyles of the ever-richer. Vive La Revolution!

It is fascinating to me to read the reaction to these programmes in different parts of the Internet and the press.

The Mail had a decidedly lightweight article about the programmes that made me wonder if the author had even watched them - the comments section wondered the same.

I debated the programmes on Pistonheads - I tend to find that arguing with people who don't agree with me is more enlightening than sitting around in a cosy concensus.

However, I found the process profoundly depressing. I can understand the 1% arguing to maintain the status quo.

The bit I don't get is where the quisling supporters of trickle down keep on saying “shaft us some more”. These people lept upon the programmes as “typcial Leftie BBC bias”.

I am possibly the last person who would defend the BBC in anything, but the programme was a single voice against a tide of conventional wisdom that austerity is the only way and we mustn't upset rich people because they are the kings of everything.

I never understood the aspirational Thatcher supporters (and later apologists) who continued to defend the worst of her anti-society projects on the basis of the “wonderful opportunities” despite not apparently benefiting at all.

There appears to be certain kind of British person who takes perverse pleasure in saying stuff like “if you think that's bad....” like the Monty Python 4 Yorkshireman sketch.

These people are ruining it for all of us by allowing us all to be repeatedly shafted, and instead of wondering about it, seeming to say “please make it worse, I take pleasure in struggling, even more so knowing I'm funding the millionaire lifestyles of others from my lack of pay rises for ten years”

WTF is wrong with these people?

NotaBene, yes, 'trickle down' was one hell of a social experiment and bought wholesale with no proof and no pre-trial run or anything. Shocking.

Anon, yes I also get fed up with people harping about how good or bad it is for them/other people rather than saying how they want things to be for us all.

A year or so ago someone mentioned to me that the trickle down effect was a lie. Once I actually thought about it and realised it was true it change totally how I viewed the subject.
Now what upset me the most about this is not that some people have more money than others, no I take that for granted with us living in a first world country.

What gets me is that I was totally taken in by many years of misinformation by my own government. I guess I am just gullible :(.

You and the rest of us both Bobbins!