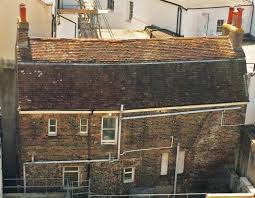 It has never been cheap or convenient to save the nation's heritage. That is not the point (though personally I would argue that, contrary to developer's claims, it is almost always cheaper to restore what exists than to demolish it and erect something unworthy in its place with little more than a 50 year life expectancy, as the majority of new builds have. Fewer, if they fall out of fashion before that).

But to get back to the point. Once all the battles are finally fought and won to save a historic gem, it is invariably to the gratitude of the local community that the survivor still stands and they discover a new pride at the piece of local history in their midst.

Such is the fight ahead to save the oldest commercial building in Brighton in the Laines, Tucked away and forgotten behind a modest and somewhat neglected 18th century building housing a branch of Timpsons, Puget's Cottage, which annexed the late Hannington's Department store represents an architectural 'Miss Havisham', virtually untouched for more than 150 years. It is only now that another attempt is to be made to straighten out the squiggly historic charm of the Laines by bulldozing an additional passage through to aid commerce that it (and Timpsons) have found themselves in the wrecking ball's path.

And fair enough, neither will ever win any beauty contests when compared to, say, the Brighton Pavilion, but they can certainly enjoy an uncovering of charms and add a unique selling point to the Laines which would be lost if the developers were allowed their somewhat unimaginative and brutal way to make it look like just another shopping street.

But this is not an 'either' 'or'. For no.16 North Street next door could easily accommodate a ground floor 'Hannington Lane', preserving not only its upper floors, but the threatened buildings at 15, and offering a much more gentle and true-to-the-spirit of the Laines alternative. Windows or access into the historic courtyard could be built into the passage and the oldest commercial building put back to commercial (or tourism) use. In fact it would be a much cheaper scheme from the developer's point of view.

Brighton and Hove City Council planning officers recommended rejection of the demolition permission, yet somehow it went through and is now, thanks to the local Brighton and Hove Historic Commission, being appealed through the Home Secretary. Rather disappointingly, not to mention alarmingly, one local heritage group The Regency Society has spoken in favour of demolition of this listed building as its chairman seems to think allowing the scheme through is 'more important' to Brighton. However it is not an 'either' 'or' as previously stated. It is actually a situation where everyone can have their cake and eat it, so what's stopping them?

On a more positive note, and following my previous blog, Save the Hippo! detailing the history of the building and saga, this week came the wonderful news that the Brighton Hippodrome is almost saved! Almost, as it is now in the hands of what we hope will prove a good and sympathetic owner - the Academy Music Group. This is largely thanks to the heroic efforts of local MP Caroline Lucas, Save the Brighton Hippodrome and Our Brighton Hippodrome Facebook campaigns who worked tirelessly to highlight the building's plight and fund raise. A fantastic example of what people power can achieve! All that remains now is to draft a sustainable business plan for the future and carry on pushing until it opens its doors again. However there is no reason to suppose the Brighton Hippodrome cannot be just as successful as its surviving and thriving sister Hippodromes in Birmingham, Bristol and elsewhere.

And what act could fail to be inspired by performing in a building cheered on by the ghosts of Max Miller, Laurel and Hardy and a whole host of old time stars..? 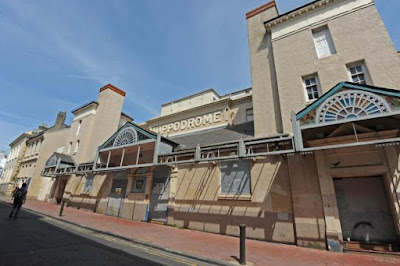 Ease of access & commerce at work with aesthetics & history. And, alas, the outcome depends on whether the council bigwigs have got souls or not.

I've seen incredible destruction here due to council greed for the higher taxes from developers.

Good that there's some positive news out of Brighton.

Steve, I suspect developer backhanders to councils or bigwigs with vested interests have always formed a big part of the ruination of our towns and cities alas.

WWW - you prove the case in point.

Its always concerning how many 'builders' have very close links to the planning department on my council. However that said as important as preserving historically important building is my bigger worry is the fact that councils are allowing building on green belt land, something I always thought they could/would never build on.