I received some sad news this week. My fellow writer from Earlsdon Writer's Group (when I lived in Coventry in the 1990s), Margaret Grant-Smith, died. Margaret was a retired business studies teacher (orderer of the first computer in Coventry for the Coventry Technical College, apparently) and the politest lady I ever knew. 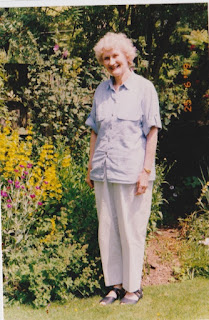 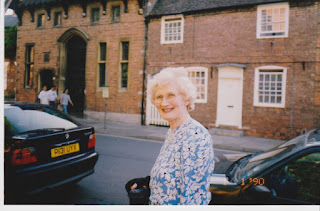 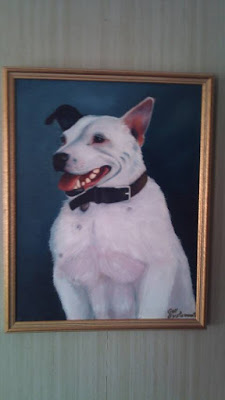 Exceptionally well-spoken, Margaret combined an old world charm with a mischievous girly giggle which belied her years.She was also surprisingly adventurous, having gone to Africa just after the war and lived and worked there for three glorious years in her early 20s, leaving her with a lifelong love of the continent.

Then her father became ill and Margaret dutifully returned to Coventry, first to help nurse him, and then to live with her mother, getting a job and helping her financially after he died.

Eventually she met Leslie, a Scottish aircraft engineer, who became her husband. They bought a newly-built 50s house in the suburbs and had two children. Leslie developed parts for the landing gear of the newly invented Concorde supersonic jet. The family lived very happily for several years.

Tragically when the children were still young Leslie contracted an aggressive form of cancer and Margaret lost him in 1971 after only 15 years together.

Left to raise the children alone, Margaret asked the Technical College (for whom she was already tutoring a few hours a week) if they could increase her hours. They did, so at least Margaret was able to continue paying the mortgage and they could remain in the family home.

Years later Margaret discovered that Leslie had been among hundreds of military servicemen who had undertaken chemical warfare exercises during their time in National Service. A significant number went on to develop cancers of various kinds and die young, but at the time everyone assumed Margaret's husband had just been unlucky. Certainly the soldiers themselves had been given no reason to suppose that the exercises they were participating in posed any danger to them long-term.

Margaret found widowhood hard, not least the hurtful fact that a number of female friends seemed to avoid her as if worried she was going to pursue their husbands now that she was a widow. Nothing could have been further from the truth. Although she enjoyed a few dates (with single gentlemen) in subsequent years and told me she received a couple of marriage proposals, Margaret was to remain single for the rest of her life - another 43 years - taking the view that no one could match up to her Leslie.

However Margaret didn't let the grass grow under her feet. She was an intrepid traveller, both at home and abroad, took up writing and was an active member of her church and community. She treated herself to a brand new car at 75 and even embarked on a screen writing course at her local university at around the same time. She also doted on her children and grandchildren and was equally cherished in return. Though it was amusing to note her slight consternation at her young grandson taking the informal liberty of christening her 'Nanny Marg'.

Margaret's writing could be unintentionally priceless. A certain drawing room play of hers involved what were supposed to be contemporary teenagers grappling with contemporary issues but they were so proper and correct in their speech and manners, the whole thing came across as a Noel Coward play gone wrong! I was in secret stitches every time Margaret recited a scene and would have loved to have seen it actually staged as it was a unique style! And it's not as if Margaret did not frequent the theatre. She loved the theatre and was open-minded to most artforms, so while she was old fashioned in some ways, she was also lively-minded and in touch in others.

While her home remained a tribute to the 1960s in its decor, it was spacious and comfortable and Margaret loved it, particularly the garden. When I first knew her in the 1990s, she had a rather unlikely canine companion inherited from her adult son. Not a dog Margaret would ever have chosen for herself, she and Suzy became the most devoted of companions. Sometimes Margaret would host Earlsdon Writer's meetings at her home and Suzy became legendary for letting out a pained groan when someone's work wasn't very good, much to Margaret's embarrassment. She turned out to be a surprisingly good literary critic! When Suzy died, Margaret had her portrait painted from a photograph and it took permanent pride of place above her mantelpiece, somewhat incongruously next to her late mother's china cabinet collection.

The last ten years of Margaret's life were a struggle with series of TIA mini strokes leading to a downward decline, much as she kept gracious and proper to the end, if somewhat confused. She had to give up her car at 87 much to her chagrin, and, one by one, most of her other activities though she walked in the nearby park every day for as long as she could. I felt sad that I lived so far away and could not visit more often though she was lucky enough to be surrounded by good neighbours, her church friends and frequent family visitors. Sadly she didn't get her wish to die in her own home as, by the final few months, she needed a nursing home, but she remained stoic throughout, her strong faith seeing her through. RIP Margaret - what a wonderful world it would be if there were more like you.

Aristocratic Uncle Jim
Impeccable manners, a charmer
No one would have guessed him
To be a practical joker

Back to England sooner than planned
To Harley Street of course, A perfect fit
The best artificial hand
I thought him brave to be proud of it

But time again, he'd feign surprise
"That damned loose screw!' he'd cry
And profusely apologise
All this before he lost his eye

What a beautiful tribute Laura and I hope her children will see it. Unforgettable people trellis our lives with their beautiful blossoms.
XO
WWW

Your respect and admiration shines through. We serve our loved ones best when we remember them fondly.

I remember Doing It, your poem I mean. said...

It was good meeting you again, even on such on occasion. Margaret would have been pleased though.

Thanks WWW. Indeed they do. What a lovely way of putting it.

Thanks Steve - I think it is so important to pay tribute to all who have been special to us.

Hi Nick, It was great to see you again too. Please drop me your email address so we can keep in touch. Lx PS: Have done a new posting about Margaret with extra photos if you click on top of blog to see it.