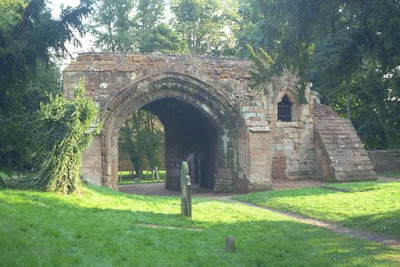 I recently set an exercise for the Library writing group I run to describe something odd or unexplained which once happened to them. Here's mine.

When I was 18, my then-boyfriend John and I were strolling hand in hand through Abbey Fields in Kenilworth. It was nearing dusk on a sunny autumnal day and in the gathering gloom, not far from the old church, I became aware of a grey robed figure wearing a hood proceeding along an earthen path from the abbey ruins. I briefly wondered if it was someone in fancy dress but then noticed that the figure was not walking but gliding just above the ground and had no feet! He also appeared to have a black hole where his face should have been.

I screamed and leapt into my startled boyfriend’s arms who promptly fell over.  I am not sure if John believed me as neither of us could see anything when we got up and dared to peak, having brushed the grass off our clothes, but I do remember we beat a hasty retreat to his red Lancia and left the park without further ado!

In retrospect it seems like a dream, but I know what I saw and I know how I reacted, which was wholly out of character. Moreover, nothing like that has happened to me before or since. I think any doubts crept in because it is so hard for the brain to process such an extraordinary spectacle, let alone within the short time frame in which it happened, so my brain has tried to convince itself since that the incident was imagined, because that is the easier option to appease its logic.

Interesting. Something similar once happened to me. If you like, you can read about it here: