I'll Go No More a Rover-ing! 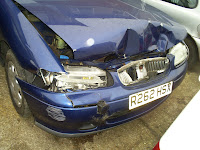 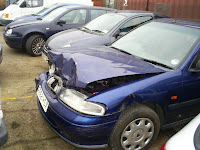 My beloved Suzuki Swiftie was getting a little less nifty
So reluctantly I set aside a Saturday to look for another car
Turned the corner from my house and there you were.
An almost-immaculate looking Rover in my price range
I went to pick up a male friend and though I had arranged
To see other cars, we returned, I had a test drive and he couldn't disagree
That you seemed like the car almost waiting for me.
Careful lady owner, taxed, MOT'd, mileage fair,
Basic checks passed, paperwork in order, I bought you then and there.
For the first week you were wonderful, like an ocean liner on wheels
Your door actions were pleasing, your array of luxury extras seemed unreal,
Then you decided to play up starting, not first thing in the morning
But when the engine was WARM, after many miles of driving.
Your favourite trick became stranding me at petrol stations
But choosing to start again just before the RAC arrived for resuscitation.
Off to the best Oxford Garage you went, two, three times
Coil, battery, starter, alternator, fine
The cause of the trouble they couldn't divine
But they re-shod the brake, replaced three tyres
You behaved for a while and then blew a gasket!
I nicknamed you the 'Money Pit', and boy, did you live up to it!
But I was in too deep to trade you in again.
Another car was another risk,
and I really thought you were starting to like me, when…
Several weeks later, out with a friend on the road,
You refused to brake completely and into a Land Cruiser you sloughed.
Now your bonnet is buckled and your grille has lost its smile
Or perhaps it was a cruel sneer, all the while.
Farewell, my Money Pit minx,
With your driver-beating jinx.
Let's hope my bad car-ma is over,
My late, ill-starred, unlamented Rover!

Actually 'Money Pit' may yet have the last laugh as the insurers have yet to declare him 'economically irrepairable' following my crash on Thursday night. But since fairly small dents seem to qualify for writing cars off in these (green?) days of ours, I’d be surprised to see him back in my driveway somehow. You don't really expect to have an abusive relationship with a car, do you? Yet in our five months together it often seemed that way with me nervous to step inside his portals and find out what he was going to do to me next!
I only thank goodness neither myself nor friend Paul were hurt on Thursday night, bar the inevitable shock and touch of whiplash, and that the family in front were just shocked with a loose bumper and a few dents to show for the impact. Ironically it transpired my crashees' first husband had been killed in a car crash, so I also met the first Land Cruiser driver with a genuine excuse for driving one that night plus enough kids to actually fill one. And bless her, she was as nice as she could be under the circumstances. Her second husband swiftly turned up and was a great help aiding Paul in getting Money Pit and the debris off the main road while we awaited the rescue services.

oo-er, I appear to have written the worlds' worst poem! Sorry. You can blame it on shock...

Awwwww poor you. I thought your poem was rather clever and it made me chuckle (no mean feat!)- but I guess I'm no connoisseur of poetry.

I'm glad you are OK, it sounds nasty. And I know all about abusive relationships with cars - I've had a few in my time, Devious of course but also a nameless car with an oil leak - the one positive thing about that one was that I managed to get a lot of "free" gifts from petrol stations on account of all the oil I bought for every journey.

I did your meme by the way - feels like a year ago now but I think it was actually on Saturday!

Actually, I was admiring the way you'd written such a conversational poem... though the Yoda-esque syntax perhaps gets a little too much to make it all work. Fun though.

Hope you're over your shock now.

Oh dear, with me having a crash last month and now you I do hope I haven't started a blog-trend!! Hope you're over the shock, poem was very enjoyable (unlike your experience!!) I crashed my ex's car once. It was scary at the time but all these years and issues later, I'm glad I did. Oh er.

Having a sub-dom relationship with a car? Hmm... there are bank managers all over the country who'd pay for that. You may yet make your money back by (really) pimping your car.

Yikes. We Americans have love affairs with our cars, so I feel ya. However, all Moi's cars are British. Go figure. The one Chevy I ever owned, the dog ate.

Thanks for the sympathy everyone. Yes I remember the tale of 'Devious' RB - a great posting about a not-so-great car! Enjoyed your fave things meme too.

Cheers Rol - you are too kind!

Sagittarian, yes I hope you're not starting a blog-trend too! Hope you sorted out your own car. Mine's just officially been declared a 'write-off' now, so a big battle over final settlements with insurance company doubtless ensues...

Or find a bank manager with a fetish for mashed Rovers, Steve!