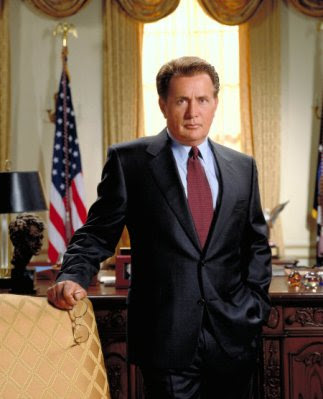 In the time-honoured British tradition of interfering in the affairs of other nations, I feel now is the time to interfere in American politics and say forget Obama and McCain, cut straight to the chase and vote for Martin Sheen! You know it makes sense. Who better to elect after all than someone who's spent enough of his career playing politicians to know exactly what to do. And more importantly, exactly what not to do. He's literally been rehearsing most of his professional life for the role of a lifetime, but can genuinely say he 'never sought high office'

Aside from playing President Bartlett in West Wing, anyone also remember him as Kennedy in 1983?

Other reasons to vote for Martin Sheen; 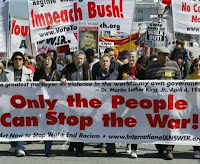 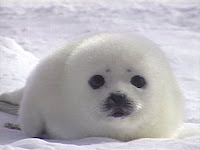 He puts his money where his mouth is and has variously been arrested for peace protests and threatened and nearly killed by hunters while trying to save baby seals.

He has a brain, and despite a modest High School education, has gotten himself a degree late in life and been awarded several honorary degrees as well.

He's been married to the lovely Janet for 47 years, whom he credits with 'saving my life' after she helped him win battles against both booze and drugs earlier in his career and also nursed him back to health following the heart attack that nearly killed him while filming Apolcalypse Now. Together they have also helped their actor offspring through various (very public) crises and always been there for them, no matter what.

He has a faith - rediscovered after surviving and confronting his demons/health crisis - which he takes pretty seriously, but without shoving it down other people's throats or bible-bashing.

He's cooler than James Dean (as you'll know if you've ever seen him as 'Kit Carruthers' in Badlands).

Finally, who could fail to trust Marty with that marvellous reassuring American voice of his just made for saying 'justice'? I'd buy a secondhand chevvy off him any day!

Show your support for Martin - get your car sticker here!

In Martin We Trust
Posted by The Poet Laura-eate at 5:21 pm

Much as I agree with you, let us also not forget the frankly evil and apocalyptic president he would have been if we'd voted in Greg Stillson (Martin Sheen from "The Dead Zone")...

I don't know why Oprah didn't go for it. She'd have probably won and scored the double whammy of being the first black and first female president.

In the meantime, I think that either Dennis Hopper or Christopher Walken would make great presidents, in a scary way.

Oh I so love Martin, Laura. In everything he's done.(Who can forget "Da" also?)
Martin for Prez? Absolutely!
And I propose Caroline Kennedy as Veep, can't you just see it?
XO
WWW

Yes but his son is Charlie. Do we really want Sheen Jr in the Whitehouse 2 decades later in the mould of G W Bush?

And we'll have Michelle Pfeiffer for VP - I just loved 'The Fabulous Baker Boys'.
However, I'm reading Barack's book at present and he is so convincing that
I'll probably change my mind tomorrow.

Absolutely - Jed Bartlett forever! As long as he had CJ with him too.

Very impressive bio, now us voters will have to choose, and eventually decide, is it made-for-movie or is it made-for-white-house role of a lifetime?

Well I can rarely spot the difference between men - they all look the same to me. I am constantly perplexed as to why Lewis Hamilton is on the TV giving speeches and then realise later that it isn't him at all but Barack Obama.

I thought Martin Sheen rode motorbikes? But that's someone else Sheen isn't it?

So how about Lewis Hamilton for President and Barry Sheene for VP? Sound good to you? Or is Barry dead? Not sure it would matter a great deal.

He's quite glamourous isn't he? And he can actually string a sentence together which would be a huge improvement. Good suggestion, Laura!

Ah Lucy, yes, but I did mention he'd also learnt how NOT to be President as a result of his presidential roles training, which would potentially make him a superb one!

Interesting candidate choice Steerforth. And a voice of the people surely? Not sure about Messrs Walken or Hopper for deps though.

Steve, interesting thought but not sure anyone would look at Charlie Sheen after they'd seen his dad cut the mustard as prez!

Kaz, I'd have to know more about Ms Pfeiffer and her real-life qualities, though I'm almost happy to take your word for it!

Rol - good choice - she's had a lot of rehearsal too!

Wandering Jay - I have no doubt Martin Sheen would make an impressive job of the real-life version and is more than ready for it!

RB - why do I get the distinct impression you're not taking Martin Sheen/the future of America seriously?

Sagittarian - you can't beat a President who can string a sentence together. Always the first thing I look for in a president! Or to quote singer Kirsty MacColl's anti-cowboy song 'There's a light in your eyes, tells me somebody's in - and you won't come the cowboy with me'