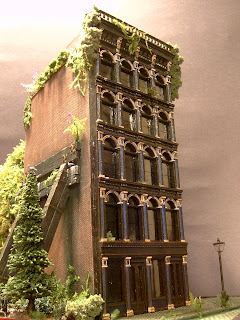 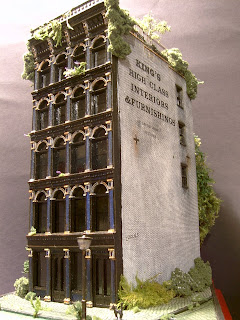 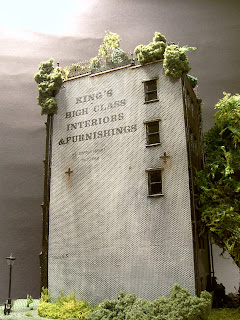 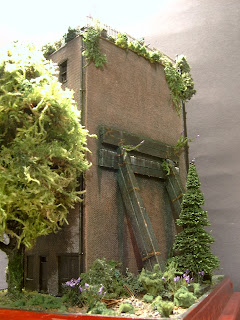 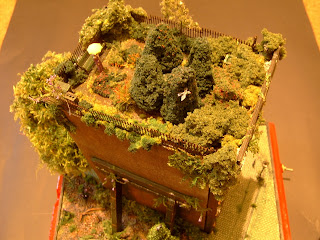 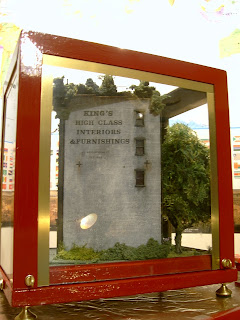 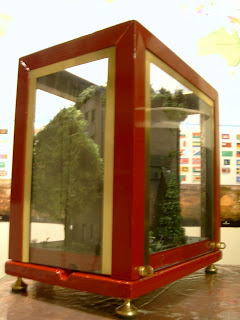 Last night good friend and former ex of mine, Brian popped round with the most incredible present - my very own mid-19th Century Chicagoan skyscaper! And he hadn't even seen my previous posting The Poet Laura-eate's Adopt-An-Heiress Scheme!

With his droll sense of humour, Brian had incorporated both my name and the fact I have a qualification in Interior Design into 'my' commercial empire.
Ah, what might have been!
And though you can't see it in these photographs, it boasts a streetlamp and flickering fireplaces inside that light up at the flick of a switch!
I couldn't believe it. It wasn't even my birthday!
Prior to starting on 19th Century commercial architecture and warships, Brian previously crafted an extraordinarily painstaking battle scene diorama of The Inkerman Battle From The Crimean War among many other models.

A lovely and talented guy whose work deserves to be seen by a far wider audience than me anyway. When we dated I was always terribly impressed how he turned old chemists' medicine cabinets into diorama presentation cases and made anything he was unable to buy himself including intricate brass fittings on a mini-lathe in the lounge! His flat was a cornucopia of skipjack delights put to innovative use and charming eccentricities such as a bedroom door striped to match the dressing gown hanging upon it.
Posted by The Poet Laura-eate at 6:25 pm

These are absolutely extraordinary. Quite brilliant!

Is that a Louis Sullivan?

What an incredibly fantastic model. I'm totally gobsmacked! Lucky you!

That's excellent - he should be making a fortune with a talent like that.

Wow, that is amazing. Don't blunder into it and squash it, will you? That's the sort of thing I would do.

He sounds an interesting chap.

These are wonderful.
They remind me of the boxes created by Joseph Cornell.
I love this sort of thing made with random 'found' objects.

What I love about this is that it is so painstaking, yet the building itself is almost everyday... its no monument - this makes it all the more arresting I think.

It really is art!

That is really clever; my brother's first wife is a whizz at making miniature things. I haven't got the patience really, or the eyesight I suspect!

Oliver, Troll, Steve, Rol, RB, Kaz, Dan and Sagittarian, thank you for your lovely comments. I know Brian will be chuffed.

Oddly enough it is harder than you might think to get Museums etc to display high quality models, no matter that Brian adds interactive elements such as lighted bits (and even real smoke in some of his battle dioramas!).

Which is a great shame, although Brian creates them primarily as a labour of love.

Most marvellous! Thanks for the builder's number BTW

My heart is pitter patting at the sight. Brilliant! Lucky you.