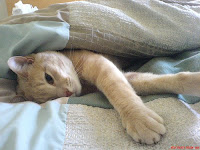 'You've got that cat in bed haven't you?' calls the accusatory voice up the stairs.
'Nooo.' you lie, desperately trying to stop Katmandu from squirming under the bed sheets.
'Oh yes you have!' insists the voice. He's not down here. You must have.'
'No, I haven't.' you plead. 'Honest.'
'Hrmph! I know your brand of honesty!'
The ominous tread upon the stair. The amber eyes glowering unimpressed beneath the bedsheets. The bedroom doorknob turning slowly in the fashion of a Hitchcock film.
Katmandu sensing he is about to be forced to keep utterly still snuggled against your chest grows jittery, rebellion gleaming in his saucer eyes. The long shadow looms over the bed.
Katmandu starts squirming downwards and tickling your nightshirt-bare legs with his fur. You try not to giggle while worrying about possible claw-work if he doesn’t get his way. Suddenly he makes a dash for it, finding an escape chink in the bedsheets and a thump is heard on the bedroom floor.
‘I knew it!’ exclaims your bedtime jailer triumphantly. ‘Your foot just moved all the way to the end of the bed and jumped out of it.’
‘I’ve got restless legs’ you protest, moving a leg quickly and unfeasibly under the bedclothes by way of unconvincing illustration. But Katmandu has betrayed you by scuttling under the bed and making a break for the door with a final miaow to indicate his displeasure at the ignominy.
'He knows he's not allowed up here, so you've got no excuses! He could have fleas or anything! One more incident like this and there'll be no pocket money for a certain someone on Saturday, young lady.'
Your mother turns toward the door, but in the half-rays of the yellow landing light, you could swear you detect a smirk.

How many times this little scene played out in my childhood from the ages of about 3 to 15, with only slight amendments to both script and cat! Does anyone else have an oft-repeated little childhood scenario they would like to share?

Photo by
Posted by The Poet Laura-eate at 12:45 pm

"Are you going to do your piano practise?"

I could have been a virtuoso, if not for those damned comics!

I'm frequently relieved of my lunch money at work by a big boy with a bowl haircut, horrifically short shorts and the girth of John Goodman... oh and he flushes my head dowm the toilet too!

"Have you brushed your hair?"
"yes"
"no you haven't"
"yes I have"
"I can still see knots, which means you haven't"
"well I did so the brush isn't working!"

Was it the same cat who stars on your sidebar???

My mother would have had kittens if she had ever found the cat in my bed. She had a bit of a fur phobia and kept a clothes brush handy to remove fur from clothes and with which she would clout the cat if it attempted to sit on the sofa!

We used to have a regular exchange at home that went like this:

It took me ages to learn to eat chocolate sponge without splodges - but it was a skill worth learning to save the nightly interrogation from my dearest mama.

"Who did that. Was that you." demanded my mum.

Steve - how awful for you! Mind you I spend a fair amount of time wedged beneath a fat girls' calves trying not to inhale her BO as she tripped me up and tried to sit on me in the corridor. I didn't even know her name for ages, but she hated me with a passion for whatever unknown reason. However the cat was a more amusing vignette!

Girl Vino, you got off lightly!

RB, 'Fraid I misappropriated a cat from Flick'r as I wanted one with the exact right expression on its face to go with posting and had none suitable from childhood. Re the chocolate sponge, I often think my parents would have had more luck discouraging my rampant sweet tooth by threatening 'No greens until you've eaten ALL your chocolate!'

Old Tarf, you really got away with that...? I wish my mum had been born yesterday!

When I was five years old, my grandmother purchased the BEST ever blankie for my bed. I loved it so much, it turned me into a female Linus. Drove my parents nuts. I finally gave it up a few years ago.

Cute story. I was the fat kid in Steve's story.