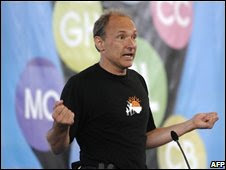 Creator of the World Wide Web, Sir Tim Berners-Lee, is concerned that the WWW is getting out of hand with 'disinformation' and wants each website (presumably including blogs) to be bannered with a stamp of trustworthiness.

Of particular concern to Sir Tim was the recent Hadron Collider story which apparently spread real panic about the creation of a black hole. And parents of brain-damaged children questioning the MMR vaccine/drug company assurances also bother him, as do conspiracy theorists.

Nice to know that paedophile, terrorist and suicide sites are obviously fine and dandy with him, eh?

And where pray, would our slow-summer media be without all the conspiracy stories to get them through, when the weather, sport and celeb goss (equally reliable obviously) isn't providing enough to fill their pages?

At the risk of being ahem, controversial, I would question Sir Tim's motives for trying to discredit those who dare question medicine/science (shareholder in either, perchance?). As for conspiracy theorists, anyone with a brain knows at least 80% of conspiracy theorists are complete loony tunes! However those remaining 20% might just be doing a valuable job in keeping us questioning things/exposing that which ought to be exposed.

Either way, it is surely our job as intelligent human beings to filter these things into the relevant mental boxes rather than Sir Tim's...?

*This posting is rated 3¾ % sq for trustworthiness.
Posted by The Poet Laura-eate at 11:12 am

How interesting! What would happen to Wikipedia? It might explode!

Much of the internet these days is based upon entertainment value, and trustworthiness is highly subjective in my opinion at the best of times.

Besides, if you visit a blog and *know* that they are unreliable insane conspiracy-mongers, you can often gain a very useful point-of-view there. I'd hate to see anyone start having to earn the right to exist online by living up to a label.

LOL. I can understand his concern, especially when mass hysteria can be such a dangerous thing. But I do agree with you that people need to be able to do some filtering of their own. I also agree that questioning things is always good. If the motives are pure then it shouldn't be a problem.

How do you stamp an opinion?

Hmm. I think it's highly dangerous to have only one approved view of anything. Misinformation occurs in all areas of life from the schoolyard upwards... learning to filter the good from the guff is something we all learn (with varying degrees of success). Who exactly is going to judge a source of being trustworthy anyway? And on what criteria?

Hi. Thanks for visiting my blog. I've enjoyed reading through some of yours. I too would be suspicious of Sir Tim's motives .. me being a parent who not only questioned the wisdom of vaccines, but rebelled in refusing to conform to having my children routinely jabbed with whatever the Government deemed appropriate. So my blog wouldn't merit a single percent of trustworthiness I shouldn't think. I'll try really hard not to lose sleep over the fact. ;-)

Smells of greed to me too! As they say, who monitors the monitor?

Conspiracy theories may be at the very base of the ladder of truth and trustworthiness, but for whatever its worth for, i do believe that it still constitutes an ounce of truth in it, which if we follow the plateau theory will eventually build into something firmer until it eventually pass the acid test of reliability.

I'm going for the 'Least Trustworthy Website' award. My old mates Lee Harvey Oswald, Elvis, and Lord Lucan are helping me put it together.

Gosh that sounds very unsatisfactory to me. Censorship can't be far off if he got his way.

Like you say, I think we have to allow that freedom, even at the risk of some people panicking or being misled, just so that the valid challenges can take place to established viewpoints etc when they need to.

We'd have to set up an illicit underground group of bloggers of unreliable repute if this happened. I would strive to achieve the lowest score possible being a contrary individual.

Sweet jeebus, do we have to be nannied 24/7 in everything? And I think your blog is more, like, 7.678 percent trustworthy :o)

Can we all place our own stamp on webpages we like/hate? I'd like to nominate private-eye.co.uk for Most Trustworthy News Organ.
My personal favourite conspiracy website was the one that said (whether based on a grain of truth or not) that deodorants gave you breast cancer (yes, you too, men) and should NOT BE WORN. It was a whiffy few months in my office before we found out you'd actually have to eat 5 deodorants a day for this to happen. I didn't bother abstaining as frankly the fags are going to get me first and I'd rather meet my maker in a reasonable state of fragrance.

No, I'm with Sir Tim. Something must be done. Why, only the other day I read somewhere that the poet-laureate is retiring (as in, stepping-down). And he's not even dead! (Actually, there might be an opening there, Laura!)

Excellent point re the likely fate of Wikipedia Nearside! Yes I take the view that the sane can be trusted to know the difference most of the time!

WWW - on similar theme, I would always sooner trust someone who doesn't earn a living or a share dividend by upholding their opinions, wouldn't you?

Teeni, hopefully mass hysteria can be confined to the hysterical. Certainly censorship should not be used to stifle questions & luckily that never works as a tactic - & only leads to MORE questions being asked!

With a rubber stamp that says OPINION is my guess Sha. :-)

Steve my man - therein lies the crux of censorship - WHO appoints themselves the big G and decides what is acceptable/trustworthy and what isn't - except for the obvious stuff we all know is wrong like padeophile sites...? Mind you since Sir Tim did invent the WWW, perhaps he can claim to be a sort of god of it.

Kitty I was never vaccinated and lived to tell the tale, though caught the usual measles and mumps - thus gaining natural immunity afterwards. I think it's an immune system issue really (aka if a child has a strong immune system/no pre-existing medical condition, there is every chance they will survive common childhood illnesses unscathed whatever drug companies say/convince governments of to sell their drugs. What they need to do is target vulnerable and malnourished children at risk, only that wouldn't be PC.

Sagittarian - Quite. And who is science itself accountable and answerable too? (a valid question when we as taxpayers pay for a sizeable proportion of what goes on in in our names. purportedly for our benefit)?

Wandering Jay - an interesting perspective I cannot argue with. The pendulum always swings wildly from one side to the other before balance is reached. But someone has to set it in motion and perhaps that's where the controversy-provokers come in.

Rol - I greatly look forward to perusing your new organ of internet credibility!

Moi - you say the sweetest things!

LucyFishWife - Private Eye is one of my favourite truth-hounds as well. For all its humour, it does sterling work sniffing out the stinking underbelly of government
quangoes, council scams, architectural debacles and all the other which-ways our country tries to shaft us. Yes, I tried the natural crystal underarm deodorant - it didn't work!

Dotterel - alas I fear it is just a vicious rumour that Mr Motion finds Queenie boring, but I'm waiting in the wings with baited breath to find her interesting!