By co-incidence two concurrent documentaries last Friday - The Insider on Channel 4 and Gardener's World on BBC2 highlighted the hidden scandal of the 'great garden grab', or how thanks to John Prescott (remember him?) private gardens up and down the country have been re-branded 'brownfield' land and therefore fair game to be built upon with little contest. 30,000 new homes are being built on these gardens per year, reducing vital urban 'green lung' capacity, squeezing wildlife out and promoting flood risk with additional pressure on local drainage, notwithstandi 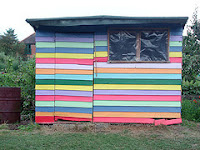 ng the social effects on the existing community and architectural eyesores often ensuing.
As if this weren't bad enough the legal protection once afforded to allotments has also been eroded with 1.5million dwindling to 297,000 since WWII.
The Insider's Matt James visited century-old Manor Gardens in south-east London threatened with transformation into a footpath for the 4-week 2012 Olympics, and spoke to long-time users who literally believed that their lives would be curtailed without their daily fix of these mature allotments, the homegrown produce and the comradeship of their fellow gardening enthusiasts. An ancient oak 'ring' in Solihull threatened by a gigantic Asda development much against the local residents' wishes, also featured.
Genuine 'brownfield' land is last on the list for developers apparently, owing to the costs of industrial decontamination and removal of old foundations and rubbish.
Whilst I appreciate there is a need for housing growth (particularly of the affordable variety which ironically, most of this sneaky land-rustling is not even contributing to), I am appalled that the housing shortage is being used as a big fatuous excuse to raze allotments and gardens with no thought as to the future urban legacy this will bequeath, let alone the past legacy lost. And I comment as someone who will need a long-term permanent home myself in due course. In addition, the threat to derelict historic buildings of 'mysterious fires' and being 'helped' to their ends, even when seemingly listed also appals me as a favourite site-grabbing wheeze on the part of developers.
Why is there no compunction to leave all the above as a very LAST resort when all other options have been exhausted, and force developers to tackle real brownfield sites first? The government could always subsidise clearance costs as they subsidise so many other industries.
After the development of all available (and genuine) brownfield land we then have housing options such as the following;-
Bad 60's & 70's monoliths, depressing and grey to look at, concrete fatigued and often a complete mis-use of land, which are crying out to be 'regenerated' into something more wonderful to behold and pleasurable to inhabit.
Disused buildings on every NHS hospital site which could feasibly be restored or redeveloped to provide short-medium term accommodation at modest cost for NHS staff, particularly those embarking on their careers who need to build up their savings for mortgage deposits. This in turn frees up nearby private rental accommodation for others.
All car parks to be multi-storey or underground to release land. Or else, attractive and practical housing built (on stilts) above ground level car parks.
Innovative Scandinavian solutions to hide ugly 80's railway stations or bad bus stations (heard the one about the city which created a piece of 'flyover' land over their railway station and covered it in houses, flats, workspaces and PARKS? (link soon)
Larger companies providing their own hostels for short-term staff needs (as a hotel in Oxford has already done, with a bus company soon to follow)
Re-enervation (rather than re-generation) of areas of the North with SENSITIVE planning of business-relocation and any additional/renovated housing needed to help alleviate housing and business pressures on the bottom-heavy South and provide new opportunities to towns and cities short of local employment.
More controversially I'd also like to see the end of all post 1930's bungalows in my area (as and when they become available for demolition), as they really are a wanton waste of land in a high-density area/age, and if they are not of any particular historic note, why not? However the garden areas would remain as intact as possible even when the bungalows were exchanged for attractive medium density community housing, which could still be 'cottagey' in style. Not that it's difficult to improve on most bungalow designs!
Until then fellow garden and allotment warriors - get your greenspace designated an 'Area of Scientific Interest' and keep painting those toads purple! Failing that let's make the eighth Harry Potter book, Harry Potter and the Potting Shed of Doom (sorry, a cynical ploy for maximum blog hits there folks, but hey, this issue needs maximum publicity!)
Posted by The Poet Laura-eate at 5:30 pm

I'm applying to build on the 'brownfield' site of Gordon Brown's back garden @ No. 10 incidentally.

I want to test if he's a NIMBY when it's HIS back yard!