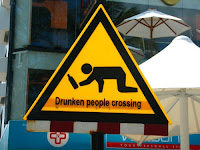 A sign we could certainly make use of in Oxford outside Ye Merry Binge & Vomit!

But talking of Health and Safety, a few things really bug me (as someone who has to fill in tons of stupid health and safety forms at my workplace for the minorest details. And why would a CORGI-registered plumber need a 'Hot Work Permit' anyway? He's done his extortionately expensive degree-level training with those so-called 'non-profit making' gastards, Corgi, he either knows what he's doing and can be trusted or he doesn't and can't, in which case why would we bother employing him?).

And now they're out to get that poor old lady who is no longer allowed to tend a village green without a lurid yellow jacket and safety signs.

But Health and Safety Police with nothing better to do, riddle-me-ree the following: -

Why are shops allowed to sell slippers ? (the clue is in the name, as I've stated before!) Or indeed any footwear not shod with all-terrain, multi-grip soles? How many people are cluttering up our hospitals owing to feckless footwear failures?

Why are drivers allowed to fit totally unnecessary (and doubtless environmentally-hostile) extra brilliant 'f*ck you!' megawatt car headlamps? How many RTA's are caused by poor innocent fellow road users being dazzled to death?

Why do woodturners at craft fairs NEVER wear protective eye goggles when demonstrating their skills to impressionable young kiddiwinks who will then go beg their parents for circular saw and lathe sets in their Christmas stockings?

Now TB is back in Britain and spreading (tuberculosis that is, not Tony Blair), why are people no longer fined for spitting in the street?

Why are dangerous criminals and psychopaths allowed out early and without sufficient rehabilitation/treatment (not a failure of public health & safety audits on their person surely?)

Why is alcohol sold in petrol stations if drinking and driving is supposed to be a bad idea, or even still illegal?

Where is the risk audit on each person who's allowed to drink themselves insensible before being turfed out of pub or bar for the night to who knows what fate? (and there are seldom fewer than three preventable drownings a year in Oxford rivers attributable to extreme drunkenness).

Ok, so I'll let them off patrolling all the breaches of public safety caused by those under druggier influences (since it is still technically illegal to take drugs in UK, thus our Health and Safety Tsars are entitled to turn an official Nelson's eye to something that doesn't lawfully exist!).

Thus ends my rant for Friday. Have a nice weekend folks. And feel free to drop me a comment of any Health and Safety jobs for the jobsworths that I've missed that they've missed.

Photo by
Posted by The Poet Laura-eate at 2:57 pm

Why are bumper cars at fairgrounds allowed? These are accidents and collisions that are not only encouraged but people actually pay their kids to have them! Outrageous!