The McCanns - An Interesting Phenomenon 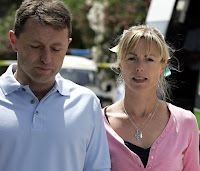 Has most of the rumour mill and general nastiness directed at the McCanns got more to do with general discomfiture at the suspicion that their second phone call was to Max Clifford, rather than any real belief that they had something to do with the disappearance of their own daughter?
Certainly their media savvyness and unprecedented high level international campaign made my own jaw drop, causing me to regard them rather oddly, as if things didn't quite 'add up' somehow.
After all, aren't parents supposed to quietly melt away and trust the Police to do their job after a couple of press conference appeals and newspaper cuttings, when a child disappears?
Three months down the line after watching the McCanns being interviewed on yesterday's BBC1 Heaven and Earth show, I find myself thinking how amazing they are for that self-same media savvyness, not to mention those little qualities determination and strength of character, albeit with a little help from their evidently genuine Catholic faith. In addition there are the following factors to be considered; -
Mr McCann is a highly educated Cardiac Consultant
Mrs McCann is a highly educated GP
Both doubtless know all about case meetings and strategy where their patients are concerned. In addition, both are old enough (late 30's) to have noticed the cases of many other child and gap year student disappearances and murders overseas, and how they tend to drop from public notice (and foreign Police interest) like a stone if not kept in the public eye somehow.
Once a disappearance or murder looks like affecting the tourism trade in an area or the reputation of that country, THAT's when it might actually be taken seriously.
So good on them for staying put and fighting on I say. Publicity and public embarrassment should know no bounds in this scenario. And perhaps the current anti-McCann backlash originates via the Portugese Police anyway, to intimidate them to leave.
Even if they are driven by guilt at trusting their parental instincts on that fateful evening, rather than the hotel babysitter, drive is drive. It is surely immaterial where it comes from.
Moreover for all the fuss that was made of their leaving their sleeping children yards away from them while they dined, this was entirely commonplace not so long ago before childcare hysteria took over. Yet you never heard about that because this is one of the first instances where instinct backfired.
Worst case (and sickest suggested) scenario - did the McCanns engineer Madeleine's disappearance for the publicity? I think you can discount that straightaway when you see how little either Mrs or Mr McCann seem to be 'enjoying' themselves whilst their daughter remains missing. Mrs McCann indeed appears to be losing weight and looking gaunt and strained, for all her grit. Mr McCann is at the heart of keeping the campaign alive and vocal, his way of dealing with it - so what?
I know the news ultimately probably won't be good about poor little Maddy (with a face that could melt the hardest criminal heart, you would've hoped), but I hope it comes nevertheless. It makes me feel guilty that I became somewhat sick of the sight of her posters plastered on every flat surface in Oxford. (Oxford?) But if your kid was missing, what would you do? Your best no doubt. And who am I to question that? The world is global these days, so fly the posters.
Posted by The Poet Laura-eate at 6:02 pm

I agree with your view of the media dilemma. If it was my kid I wouldn't rest and would try absolutely everything. And yet the McCann's media manipulation is secretly suspect in the minds of many. I also wonder if all the news crews would have camped out so eagerly and for so long if the abduction had occured in a colder, less inviting location than the Algarve... I feel horribly cynical for saying it. Like you I hope for a happy ending but have feared the worst since day one.

Well said, an original and warm take on a truly horrific situation.

If and when the McCanns return to Britain (and I can understand their reluctance not to) can you imagine the grief they'll (or more specifically she) will get from some of the public?
I pray that most people will be kind and sympathetic.
Interestingly, a lot of people say "SHE shouldn't have left them alone" not "THEY".
I cannot even begin to imagine the nightmare they must be going through and some of the cynical and accusing reactions have sickened and disgusted me.
Also, whenever something awful or tragic occurs, it's only a matter of time before I start getting sick texts about it from the usual source.
So far, I've not recieved or seen any. Perhaps there are limitations.
As to the dickbrain theory (and I haven't heard this many dickbrain theories about anything since 9/11) that they engineered the kidnapping themselves for publicity, all I can I say is: WHAAATT?? DO PEOPLE KNOW HOW STUPID AND NASTY THAT SOUNDS? WHY WOULD THEY DO THAT?
"Because they can".
Class envy? Discuss.
all WHAT???