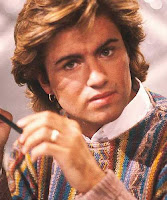 My own philosophical contribution to the Princess Diana 'diarrhoea' is
Wouldn't she and George Michael have made a great couple?
Matching flicked blonde hair do's,
He's gay, she was a gay icon,
They both had the same taste in music (his),
They could have gone shopping and to lots of discos together.
Oh come on, it probably wouldn't have stood any less chance of succeeding than Charles and Di.
Although a mere child at the time of the Royal Wedding, I remember getting caught up in the national excitement. This winsome young nursery nurse with the Betty Boop eyes in the Margaret Thatcher blue suit was going to be a real Princess! Strangely I was unable to get that excited about the Prince, who seemed more of a minor adjunct to the Royal Wedding story, rather than a happy-ever-after in himself, but the grown ups seemed to think the wedding right and proper, so it must have been.
Looking back now from an adult perspective, I cannot believe any grown up thought it would ever work, let alone persuaded we children it was some kind of fairytale happening. Conversely, a world where there hadn't existed a Princess Diana seems just as inconceivable. In a funny kind of way, she was born to do what she did and be who she was (ie a breath of fresh air in a somewhat dull and hidebound Royal Family).
And however embarrassing Princess Di subsequently became following her divorce, somehow it was difficult to dislike, or too harshly judge, this pop music-loving 'girl next door' who meant so well, had been let down so badly, and whose dancing open features the cameras almost adored as if she were Ms Monroe herself.
I caught the tail end of yet-another-Princess-Di documentary the other day where a newspaper editor even now sighed that they would not see her like again. He missed her distribution figures certainly, but he almost seemed to miss her as well. Sincerely. Which begs the intriguing question, how was it nearly every detail of her life was known, not least from her own interviews, and yet people still wanted more? Still found her enigmatic and fascinating?
How could so much charisma be contained in one person? One really quite ordinary person, if her tastes and interests were anything to go by.
Nevertheless I do think PD had a certain something that ensured she would have come to public prominence in any capacity - even if nowadays Big Brother or The X Factor might have been the vehicle, rather than Prince Charles.
As for her death, what of the conspiracy theories? While it's striking that Princess Di's final months seemed deliberately geared towards winding up the Royal Family whom she evidently felt somewhat betrayed by, whether this had gotten her to the point of rendering her Di-Spencer-ble, I prefer not to dwell on (only did anyone get to the bottom of the rumour that all the CCTV cameras in the tunnel were pointing back at the walls?). Notwithstanding sheer human incompetence is probably just as deadly frankly, and watching the programmes about her death, it would appear that the night of the tragedy had been a cock-up on the part of her host 'Dodo' from beginning to end, regardless of the role of the paparazzi, who were clearly no angels either, and quite capable of putting their 'golden goose' at risk for the sake of their 'money shots'.
Will we ever know? Does the legend that was once a fallible human being known as Princess Diana still mind in view of her immortal elevation v what she'd possibly be doing now had she lived?
It may be an unpalatable truth, but early-death for icons seemingly remains the ultimate career move, whether accidental or otherwise. I suspect I may've left it too late on both counts…
Posted by The Poet Laura-eate at 11:03 am

I remember refusing to watch the funeral on the day as I found the whole swollen overblowness of the whole thing really distasteful... the sobbing in the streets, the creening souls along the shop fronts... it was all too much and seemed like a gross pantomime. Looking back I have no regrets. I'm sure she was lovely but I refuse to have my sense of UK culture hijacked by her life or her death. Does that sound harsh? Maybe. Hopefully it's just balanced. I can think of hundreds of people who mean more to me than PD ever did.

As for the conspiracy theories. My feeling is the driver was simply over the limit, drove too fast, lost control, crashed, beginning of story...

I was told by a journalist friend (so it must be true) that the headline THE SUN nearly went with was:

Although the nation undoubtedly benefitted from her humanity and caring in some ways, I can't help feeling she also did us a grave disservice in aiding the promotion of this culture of 'victimhood' and 'blame', with few people still willing to take responsibility for themselves and their choices and be grown up about the cards that life has dealt them without blubbing or running to the doctor for anti-depressants at the slightest provocation. But I do think society was probably headed this way anyway and Princess Di maybe just exacerbated what was already happening.

But this is to make excuses for her! She should TAKE responsibility (were but she were alive to do so of course).