The Origin of Dawkins...?

Was going to post a poem today (before they get me under the Trades Descriptions Act), never expecting for one moment that Richard Dawkins would break into my thoughtlife and hijack the posting. However a strange juxtaposition manifested as I watched him in last night's episode of his Channel 4 soapbox two-parter 'The Enemies of Reason' (who died and made him God/Reason, eh?), as Professor Dawkins gamely tried a few alternative therapies in order to roundly debunk them in a kindly way, as he's not without compassion for the 'delusional'. It slowly dawned on me that he is not facially dissimilar to a portrait of Charles Darwin I once saw. His hero, no less.

In addition, their surnames are very similar and their 'mission' in life seems to be that Dawkins is here to take up where 'monkey boy' Darwin left off and has even written extensively about him. Perhaps influenced by the fact I have read a number of books about reincarnation theory (research for a story I'm writing) recently, I idly found myself wondering how much more interesting the programme might have been if Dawkins had tried 'Regression' therapy with one of the nations' foremost practitioners as well.

Supposing (and this is a big suppose, admittedly!) his dredged-up subconscious informed Dawkins he had indeed been Charles Darwin in a previous life, and furnished him with evidence enough to convince him. Which raises the even more interesting question; would flattery/vanity have got the better of Dawkins, causing him to revise his whole outlook and theories on everything to accommodate this prospective two-for-one celeb status? Or would his anti-spiritual principles hold true and would he remain dogged about his dogma and all-round dog-in-a-manger about everyone else's?

After all, the majority of us have the humility to admit, we simply 'don't know' when it comes to life's big questions, let alone insisting on our views unless we are some kind of fundamentalist (apparently they explore their fundaments!)

An interesting programme idea for the future methinks, except I have now possibly spoiled the grande denouement! And I'm not a wholesale believer in reincarnation myself admittedly. I just find it a fascinating concept (not to mention darn good, and largely unexploited, 'yarn material' as a writer!). To quote Voltaire; 'It is not more surprising to be born twice than once; everything in nature is resurrection.'
Regrettably I could not locate the portrait I remembered but I found a photograph of Darwin beneath, where the head, eyes and jowls have definite parallels to Dawkins' photo on the right. Perhaps I will dig out an online poll in due course so that readers can vote on the matter.

But plenty of great writers and thinkers have had serious thoughts about reincarnation over the years as you can see from this link.
Reincarnation: Quotes from Famous People 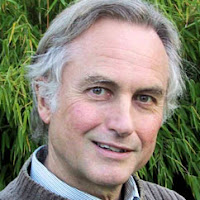 Posted by The Poet Laura-eate at 1:05 pm

That's a particularly flattering photo of Dawkins I feel. The sneer has obviously been "photoshopped" out.

I've not been watching these programs - the man makes me want to scream. But somewhere else I read that one of the therapists he confronted believed that people had black holes in them. I fear science may itself be confused, as I was under the impression that "string theory" does indeed portray that we all have entire universes inside of us, presumably including said black holes.

I reckon it all breaks down anyway at the point that science can not provide proof. It seems to me that God is as like to be a quantum google-thingy as any other explanation for them!

I'm sure I've read somewhere that there is a part of the brain that scientists have identified as being the part that houses man's need for faith/spirituality and Mr Dawkin's is spectacularly undeveloped - which may explain his inability to believe in anything by faith alone.

His arguments are always interesting though he does often miss the most fundamental of points. If faith serves no purpose why has humanity such a facility for it?

I also think that Dawkins is just another religion - he's proselytizing his views like any US evangelist and has a product to sell. I bet he'd enjoy himself if he was ever let loose on a pulpit.

Prof Dawkins' wife (former Dr Who assistant and wife of Tom Baker, Lalla Ward) took his photo. I should have credited her! Sorry Lalla.

Yes, I am coming to the conclusion that science doesn't have as many answers as it pretends, for all its protestations, postulating and posturing. And basically you can prove anything you want to if you decide the laboratory conditions under which you will obtain the results you seek to fit your pre-determined theory. A bit like pollsters skew their questioning to elicit the answers they want from their representative demographic.

I think Dawkins is still financed by that Microsoft guy who had enough money to waste to get a trip into space last year - Charles Simonyi.

But I think Colin Blakemore does more for the "public understanding of science".

If "science" could persuade economists not to call themselves "scientists" I might believe they can explain the world!

Re Blakemore I think he undermines his credibility myself by being the notorious sewer-upper of live kittens' eyelids (to research childhood blindness if you please, no matter that there were undoubtedly many perfectly good blind children around who might have been only too pleased to answer his questions minus torture), among many other dodgy experiments of questionable demonstrable benefit to mankind, & not a great many favours to animalkind either.
But he's got all his hair, has a pet cat he's nice to and that's what people tend to respect in politics. Oh and a high-ish profile thanks to those animal rights riff-raff.